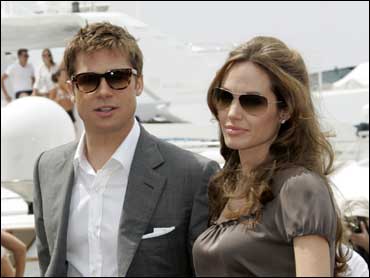 Angelina Jolie, who plays the widow of slain Wall Street Journal reporter Daniel Pearl in "A Mighty Heart," said she was overwhelmed by Mariane Pearl's inner strength and her ability to let go of hatred.

Jolie, Pearl and Brad Pitt, the movie's co-producer, were at the Cannes Film Festival on Monday for the premiere of "A Mighty Heart," about Daniel Pearl's abduction and murder in Pakistan in 2002 while researching a story on Islamic militants.

The film, shot in a naturalistic documentary style, recounts the search to find Daniel Pearl's kidnappers and his widow's struggle to come to terms with his murder. Mariane Pearl was more than five months pregnant at the time.

"For me, so much of why this film was important to do is because I highly doubt there is anybody in this room who has more reason to hold hate inside herself than Mariane, and she doesn't," Jolie told reporters.

The film, directed by Britain's Michael Winterbottom ("The Road to Guantanamo," "Welcome to Sarajevo"), begins on the last day the Pearls spent together in Pakistan, where they were both on assignment as reporters. When he disappeared, Mariane Pearl was deeply involved in the search to find him.

Daniel Pearl was captured by Islamic militants in January 2002 while researching a story on Islamic militancy in the wake of the Sept. 11 terrorist attacks. Despite worldwide pleas for his release, he was beheaded nine days later; video of the killing was posted the Internet. Khalid Sheikh Mohammed, an alleged al Qaeda chief held at Guantanamo Bay, has confessed to killing Pearl.

2Mariane Pearl said she got in touch with Jolie after reading a magazine interview with her and being struck by the feeling they could be friends. She asked Jolie to play her in the film adaptation of her memoir "A Mighty Heart," and said their friendship grew over the course of the project.

"I think about the fact that my son will see the film one day, and this is a great moment of pain for me," Pearl said. "And this role was played by somebody who loves me, and it means a lot to me."

Jolie said her own pregnancy, during the film's preparatory stages, helped her understand what Pearl went through.

"I remember being six months pregnant and thinking, I can't imagine at this time not having the father with me ... and being concerned about his life, and trying to eat and trying to remember to get some sleep and trying to take a deep breath and physically even just moving around," Jolie said. "As a woman it just made me so much more connected to her and aware of her."