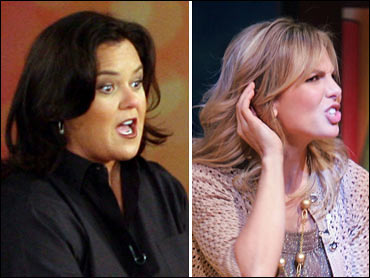 In the wake of the heated argument between "The View" co-hosts Rosie O'Donnell and Elizabeth Hasselbeck, the show's immediate future remains unclear.

Today's show was pre-empted by President Bush's press conference. A source at the show said that executive producer Barbara Walters didn't address Wednesday's fight except to say that O'Donnell was out because she is celebrating her partner's birthday.

Guest host comedian Kathy Griffin made several jokes about the fight, but for the most part, the show was uneventful.

In a posting on O'Donnell's blog, she wrote: "a split screen, new heights, or lows, depending on who u ask."

In the "Ask Ro" section of O'Donnell's Web site, a fan wrote: "I would walk. (W)ork isn't worth that battle."

Personal and political tensions erupted on "The View" Wednesday when O'Donnell and Hasselbeck resurrected their fight about O'Donnell's comments on U.S. involvement in Iraq and terrorists.

Last week, O'Donnell said that 650,000 Iraqis have died since the United States invasion and asked "who are the real terrorists in Iraq?" angering many conservative pundits. On Monday, Hasselbeck said that O'Donnell should explain what she really meant.

But it didn't die there. The fight got started again when Rosie said she is criticized because she is a "fat lesbian" and Elizabeth is pure, innocent and Christian. O'Donnell called Hasselbeck cowardly for not defending her and Hasselbeck said: "I'll tell you what's cowardly, asking a rhetorical question that you cannot answer yourself."

Hasselbeck discussed the war of words in an interview with syndicated entertainment show "Extra" that was to air Wednesday evening.

"I honestly think, I believe that we are mature women who can resolve," she said. "I hope we can. I would hope that a disagreement or a heated debate wouldn't be the end of a relationship."

O'Donnell and Hasselbeck have gone head to head many times during O'Donnell's tenure on "The View."

Now, it appears that Rosie will not be on the show Thursday. On her blog she posted a note saying, "tomorrow kelli turns 40. i will not be at work." She was referring to her partner, Kelli Carpenter.

This is not O'Donnell's first controversy. Earlier this year, she was involved in a contentious feud with real-estate mogul Donald Trump.

"It's a lot easier to fight people like Donald Trump, isn't it, because he's obnoxious!" Hasselbeck said Wednesday morning.

O'Donnell, who has only three weeks left at "The View," said she wanted to know what Hasselbeck personally thought she meant.

2"What I was asking is, you, who actually knows me, do you believe I think our troops are terrorists, Elizabeth?" she said.

When Hasselbeck, who is married to New York Giants backup quarterback Tim Hasselbeck, began to speak, O'Donnell cut her off, demanding a yes or no answer and said that Elizabeth would "double speak."

"I am not a double-speaker and I don't put suggestions out there that lead people to think things and not answer my own question," Hasselbeck shot back. "...I don't believe that you believe troops are terrorists, I have said that before, but when you say something like 650,000 Iraqis are dead …"

"It's true, you don't like the facts!" O'Donnell said.

"I am all about facts, you know that. You tell me not to use facts and to only go on emotion. Guess what? I like facts. I like them," Hasselbeck said.

"But you hide behind the ones you like. You cherry pick them," O'Donnell said.

The discussion became so heated that the producers skipped a commercial break. They went to a split screen of Hasselbeck and O'Donnell's faces, both of which were full of emotion.

Photos: The Famous & Their Feuds

"I wanted to know what people like you, but you are my friend since September, do you believe I think our troops are terrorists?" O'Donnell said. "And you wouldn't even look me in the face, Elizabeth, and say, 'No, Rosie, I can understand how people might have thought that, why don't you take an opportunity,' like I'm six."

Guest co-host Sherri Shepherd and co-host Joy Behar tried to lighten the mood and after a while Behar couldn't contain her groans. At one point, she and Shepherd tried to leave the table.

Finally Behar exclaimed: "What are we, on PBS? Who is directing this show? Let's go to commercial!"

O'Donnell is due to leave the show in June.