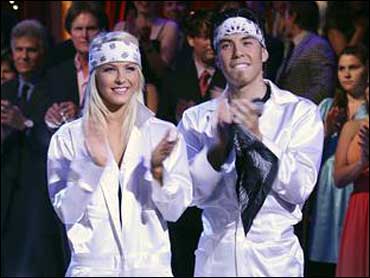 Ohno, 25, became a technical master during the season, training as hard in the dance studio as he does on the ice.

"I feel amazing," the ebullient Ohno said. "You put your mind to something, you give 100 percent, sacrifice and dedication, anything is possible."

Photos: Scenes From The "Dancing" Finale
Photos: Where Are The Dancers Now?

"Apolo's competitiveness is almost on the verge of insanity," said his coach, John Schaeffer.

3Fatone, 30, was the season's undisputed showman. The pop star-turned-actor used a light saber for a "Star Wars" themed tango and wore breakaway clothes and a sparkly gold suit for his freestyle dance.

"Congratulations to them. Well-deserved," he said to Ono and Hough, adding, "I feel like a winner."

Being on the show "has been an amazing journey," Fatone said: "It's probably one of the best things I've ever done in my life."

Photos: "Dancing With The Stars" Contestants

Laila Ali, who joined Ohno and Fatone during the final round, was eliminated from the trophy race in the middle of Tuesday's two-hour finale. She and her partner, Maksim Chmerkovskiy, earned the lowest score from the judges, and fans failed to make up the difference.

When asked which of her fellow contestants was poised to take the trophy, Ali called both "great."

4"It doesn't mean anything, no matter who wins," said Ali, whose wins in other arenas include women's Super Middleweight boxing world champion. "Especially because I didn't."

Being on the show allowed fans to see her in a different light, she said. The 29-year-old daughter of world heavyweight boxing legend Muhammad Ali was the last remaining female contestant.

Fans - taken with Ali's grace, Fatone's showmanship and Ohno's determination - got to know their favorites a little better each week as the show offered glimpses of the couples behind the scenes.

Ali's partner was the guest of honor at a get-to-know-you backyard barbecue at the boxer's home. Ohno invited a hip-hop dancer to help him with his moves. Fatone took his partner, Kym Johnson, to Disneyland. Viewers connected with them as they bonded with each other.

"Dancing With the Stars" is based on a British show called "Strictly Come Dancing." The format has since spread to 29 countries, including Poland, India, Chile and Germany. This is the fourth season of the American version. Past champions were soap opera star Kelly Monaco, former 98 Degrees member Drew Lachey, and NFL great Emmitt Smith.

Story: Super Bowl Vs. "Dancing With The Stars"

None of the show's contestants, when chosen for the competition, were expert dancers. Each became the student and performing partner of a professional dancer throughout the 10-week season. Three judges rate each couple's ballroom- and Latin-dance skills while viewers weigh in by phone and Internet. The combined tallies determine which couple is eliminated each week.

Lachey said participating on the show was "one of the best things I've done in my whole life."

"People have forgotten all about my football career," said Smith.

Each episode has drawn at least 16.5 million viewers this season.