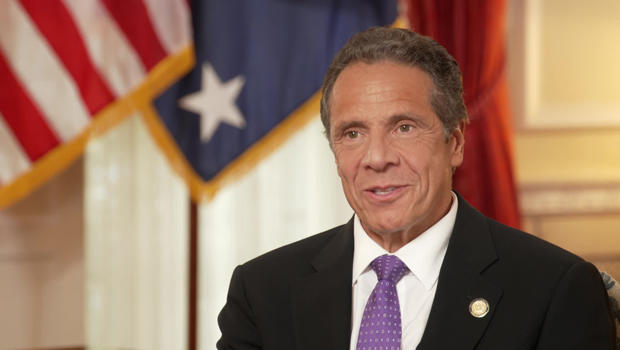 HEADLINES: Back on campaign trail, Trump dismisses COVID testing (Video)
In Tulsa, Okla., President Donald Trump returned to the campaign trail Saturday for the first time since the country was shut down due to coronavirus. Speaking to a smaller-than-predicted crowd, he sought to fire up his base by attacking "fake" news about COVID-19 and blaming testing for the rise in U.S. cases. Omar Villafranca reports.

COVER STORY: Gov. Andrew Cuomo on confronting a "frightening" pandemic, and thoughts on his political future | Watch Video
New York governor Andrew Cuomo, who has proactively confronted the coronavirus outbreak in his state, has performed some political jujitsu – asking people to do hard things and sacrifice because of the pandemic, and getting more popular in the process. "Sunday Morning" host Jane Pauley sits down with Cuomo to discuss leading New York's so-far-successful efforts to "flatten the curve"; the Trump administration's COVID-19 response; living in quarantine with his daughters; and his political future.

INDEX: Coronavirus update
In a British trial, Dexamethasone, an inexpensive steroid, has been shown to reduce deaths among patients critically ill with the coronavirus.

Young boys' songs of joy rise from the slums of Madagascar

The New England Journal of Medicine reports that genetic analysis of thousands of European COVID patients finds those with Type A blood were more likely to have severe cases. Those with Type O were less likely.

As of yesterday, 119,000 Americans have died from Coronavirus. There have been 8,600,000 confirmed cases worldwide.

HERITAGE:  Preserving the traditions of black cowboys | Watch Video
After the Civil War, black cowboys played a key role in settling the West, and their heritage is honored by African American cowboys and rodeo riders today. "CBS This Morning: Saturday" co-host Michelle Miller talked with members of the Compton Cowboys, a Los Angeles group of riders who take to the streets of South Central on horseback; and with participants in the Bill Pickett Invitational Rodeo, named for the famed African American Wild West Show star.

HARTMAN: Letters to Dad (Video)
Back in 2011, Barry Lampke secretly installed a mailbox in the woods of Geprags Park in Hinesburg, Vermont seemingly for one recipient: "Dad." Ever since, strangers have shared hundreds of messages of love to dads gone by. Steve Hartman reports.

BUSINESS:  Small businesses, big problems in a time of pandemic | Watch Video
Economists estimate more than 100,000 small businesses have already shut permanently since the COVID-19 pandemic began. Others are facing staggering losses and are fighting to survive. "Sunday Morning" special contributor Ted Koppel talks with small business owners and independent operators about the pressures they are facing.

MUSIC: Yusuf revisits the songs of Cat Stevens | Watch Video
By any name, Yusuf Islam is a legend.  The man who came to fame as Cat Stevens will soon release a new album, a collection of songs he made famous half a century ago and has now re-recorded with the perspective that 50 years of living can bring. Correspondent Tracy Smith talks with Yusuf about recording "Tea for the Tillerman 2," including his duet with his younger self for the song "Father and Son."

To watch a new music video of Yusuf's rerecording of "Where Do the Children Play?" click on the video player below:

SUNDAY PROFILE: Apple CEO Tim Cook on the nexus of technology and social change | Watch Video
Tim Cook has been the CEO of Apple for nearly a decade now, long enough to have moved out of the shadow of company co-founder Steve Jobs. But Cook still carries on a three-decade Apple tradition: their Worldwide Developers Conference, which starts tomorrow. It is one of Apple's marquee events, but what will that tradition look like in an age of social distancing, as the WWDC goes all-online? "60 Minutes" correspondent John Dickerson talks with Cook about societal changes, social responsibility, and uncertainty.

COMMENTARY: Jim Gaffigan on what really dads want for Father's Day | Watch Video
The comedian, who's been living in quarantine for three months with his kids, has some thoughts on what would make an ideal Father's Day this year.

JUSTICE: The historic tension between black and blue, and the rise in calls to "defund the police" | Watch Video
Demands for wholesale changes in policing that may have seemed unthinkable just a few weeks ago have erupted since the death, in police custody, of George Floyd in Minneapolis, and follow other cases of black men who have died at the hands of police officers. Correspondent Jeff Pegues reports on the longstanding tension between black and blue, and what calls to "defund the police" actually mean.

COMMENTARY: Gerald Bostock on SCOTUS' landmark LGBTQ ruling | Watch Video
A plaintiff in one of the LGBTQ discrimination cases decided this week by the Supreme Court speaks about the message sent by SCOTUS with regards to protecting the civil rights of workers.

PASSAGE: The story of Juneteenth (Video)
This week saw the 155th anniversary of Juneteenth, marking the day when Union Major General Gordon Granger proclaimed to the people of Texas, on June 19, 1865, that "all slaves are free" – the end of slavery in America. But it would not mean the end of oppression. Jane Pauley reports.

SUNSPOTS: Photographer Ryan Bakerink's Chicago 2020 time capsule | Watch Video
A project to document all 77 of the city's neighborhoods become something entirely unexpected due to the coronavirus pandemic and Black Lives Matter protests.


You can also download the free "Sunday Morning" audio podcast at iTunes and at Play.it. Now you'll never miss the trumpet!