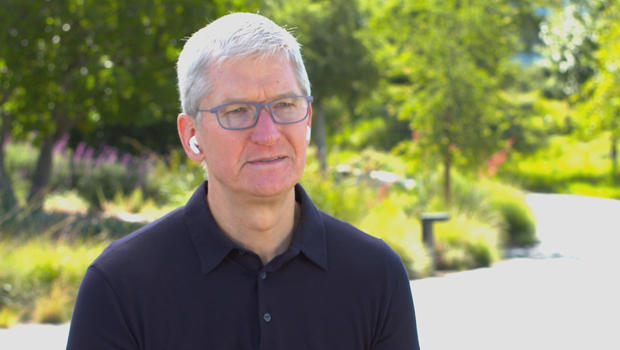 Apple's top executive Tim Cook, who six years ago became the first Fortune 500 CEO to come out as gay, is "incredibly grateful" for the Supreme Court decision this week making it illegal for companies to discriminate based on someone's sexual orientation, he said in an interview with John Dickerson for "CBS Sunday Morning," to be broadcast Sunday, June 21.

"I was incredibly grateful for their opinion," Cook told the "60 Minutes correspondent. "And I applaud the justices who stood up and did that. You know, to me, America is on a journey toward equality. And that is one more brick in the wall, and a very important one."

Cook's outspokenness on civil rights could set him on a collision course with President Donald Trump. The president has hosted Cook at the White House to talk about taxes and trade issues that are key to Apple's bottom line.

But does the Apple CEO also bring up civil rights issues with the president?

"Of course I do," Cook told Dickerson. "And on that issue, my mind, as I said before, all roads lead to equality. … I believe that everyone should be treated with dignity and respect. It's basically that simple. And that we start life on this equal footing and then the people that work hard can get ahead and those sorts of things. But we should start life on an equal footing. And I long for that day."

Cook spoke with Dickerson just days before the company's highly-anticipated annual Worldwide Developers Conference (WWDC), which kicks off this coming Monday, when the company will reveal details about new technology and software. Cook shares thoughts about the impact of the COVID-19 pandemic, how the iPhone has transformed most aspects of life, and the death of George Floyd, which was captured by cellphone video.

Cook pointed out that some of the most dramatic societal changes of recent times have come because someone captured video on a cellphone.  He also said he's proud that Apple has helped put a camera in everyone's pocket.

"It's democratized," Cook said. "And indisputably you can look at those videos and see what happened as if you were there. And so, it becomes much tougher as a society, I believe, to convince themselves that it didn't happen, or that it happened in a different manner or whatever it might be."

Of the George Floyd video in particular, Cook said, "I think fundamentally this one will change the world."