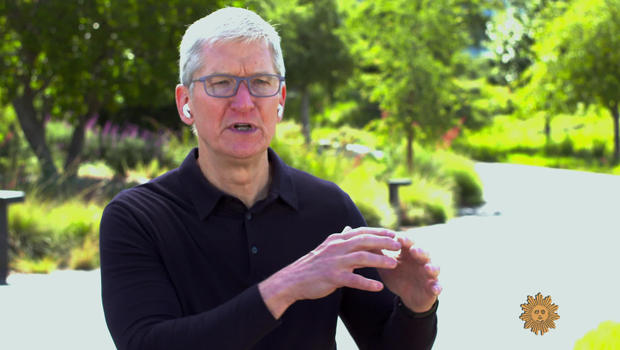 "I'm full of secrets and it's hard not to overflow right now. But I've been trained well!" Cook laughed.

He will finally get to share those secrets tomorrow, when he kicks off Apple's 31st annual Worldwide Developer's Conference (WWDC). It's a gathering of programmers from around the world who create the content that fuels what Apple calculates is a half-trillion-dollar app-based economy.

"If you're a consumer, you find out some of your most favorite software features are announced there," Cook said. "If you're a developer, you get some new technology that you can incorporate in your app and make your app even better. And if you're somebody like me that sort of steps back and looks at it all, you see the intersection of technology and the liberal arts, and it really makes your heart sing."

"So, are you among your people there when this happens?" Dickerson asked.

"Oh yes. Oh yes. I'm among everyone. If it were physical, I'd be right there with everybody else!"

But the conference will not be physical this year, for the same reason Dickerson and Cook are conducting their interview 2,500 miles apart, as a consequence of COVID-19. Apple will host a virtual conference, promising more than just a grainy workaround: they're promising to innovate the form.

Apple's iPhone, introduced in 2007, has transformed not just communication, but nearly every aspect of our lives. And the iPhone has helped make Apple one of the wealthiest companies in the world, with a market capitalization comparable to the gross domestic products of Australia, Spain, or even Saudi Arabia.

Dickerson said, "Apple has a market cap of about $1.4 trillion. What is the role of the CEO in a socially-responsible company that has that kind of size in the world?"

"You know, there was a time back many years ago where CEOs were just supposed to focus on profits only, and not so much the constituencies. And that's never been my view. I've never subscribed to that,' Cook replied.

Cook recently posted a statement on Apple's home page addressing the death of George Floyd at the hands of Minneapolis police — an incident that may very well have gone unnoticed if not for cellphone video.

Dickerson asked, "Do you ever reflect on the role the iPhone has played in being able to record moments like the nearly nine minutes that George Floyd had an officer's knee on his neck?"

"The thing that has changed, though, and we're very proud of this, is that we put a camera in everybody's pocket. And so, it becomes much tougher as a society, I believe, to convince themselves that it didn't happen, or that it happened in a different manner or whatever it might be.

Of the George Floyd video, which has sparked global protests, Cook said, "I think fundamentally, this one will change the world."

Cook has been Apple's CEO for nearly a decade now, and he is the product of a very different world. He was born in 1960 in small-town Robertsdale, Alabama.

"Do you remember your first experience with racism?" Dickerson asked.

"I remember, John, as if it were yesterday, seeing doors that said — sometimes it had been tried to scratch through — 'whites only,'" Cook said. "And fundamentally not understanding how people could convince themselves that this was right.

"I do believe, optimistically, this is one of those moments that we could make significant progress. For so many things it seems like there's such slow progress, and then all of the sudden, there's a giant leap."

Six years ago, Cook took a leap of his own — becoming the first openly-gay Fortune 500 CEO.

Dickerson asked, "The Supreme Court recently said that there can no longer be disorientation against people based on their orientation. What was your reaction to that?"

"I was incredibly grateful for their opinion," said Cook. "And I applaud the justices who stood up and did that."

Cook's outspokenness on civil rights has put him on what might appear to be a collision course with President Trump.

"In your interactions with Donald Trump, you have a lot of issues that Apple cares about," said Dickerson. "But the administration also has policies — on immigration, on human rights — that are totally antithetical to your personal views. Do you bring up some of these issues with Donald Trump in your conversations?"

"Of course I do," Cook replied. "And on that issue, my mind, as I said before, all roads lead to equality. I believe that everyone should be treated with dignity and respect. It's basically that simple. And that we start life on this equal footing and then the people that work hard can get ahead and those sorts of things. But we should start life on an equal footing. And I long for that day."

There is one issue, however, where Cook appears to see eye-to-eye with the president: keeping corporate taxes low.

Dickerson asked, "What is the metric you think about in terms of your desire to be socially responsible, and your fiduciary duty to keep basically paying as low taxes as possible?"

"Well, our responsibility is to pay what we owe, just plain and simple," Cook said.

"But as you think about it, paying what you owe, that's the standard; every company does that. Is there a way in which the value proposition you've been talking about operates when it comes to paying taxes?"

"Well, you can see that we do a lot more than pay taxes," Cook said. "We turned the company upside-down to help the world on COVID, and donated all of that, hundreds of millions of dollars. And so, I think my own view is, you pay what you owe in taxes. And then you give back to society. And Apple is clearly doing that."

COVID-19 is affecting more than just the company's bottom line. Apple's multibillion-dollar California headquarters is nearly empty — and Tim Cook would like nothing more than to get his people back under one gleaming roof.

"That is the biggest challenge I would say in what we're dealing with," he said. "The thing that I worry that we'll be missing is the serendipity that we all count on. And for that reason I can't wait until we're all back together again."

"We are all called in the age of COVID-19 to tolerate extraordinary uncertainty," said Dickerson. "How has it been managing that, both in terms of products, and also your employees, the uncertainty of the world we live in now?"

"Well, you know, people generally just dislike uncertainty, I would say as a general rule," Cook laughed. "I know very few people that thrive on uncertainty. They try to take an uncertain thing and make it a bit more certain. They do that by estimating where things are going, by predicting the worst that can happen and the best that can happen.

"And we have done all of those things, I would tell you. But the most important thing for us is, we viewed it as a challenge to overcome."

The price of free speech - and censorship