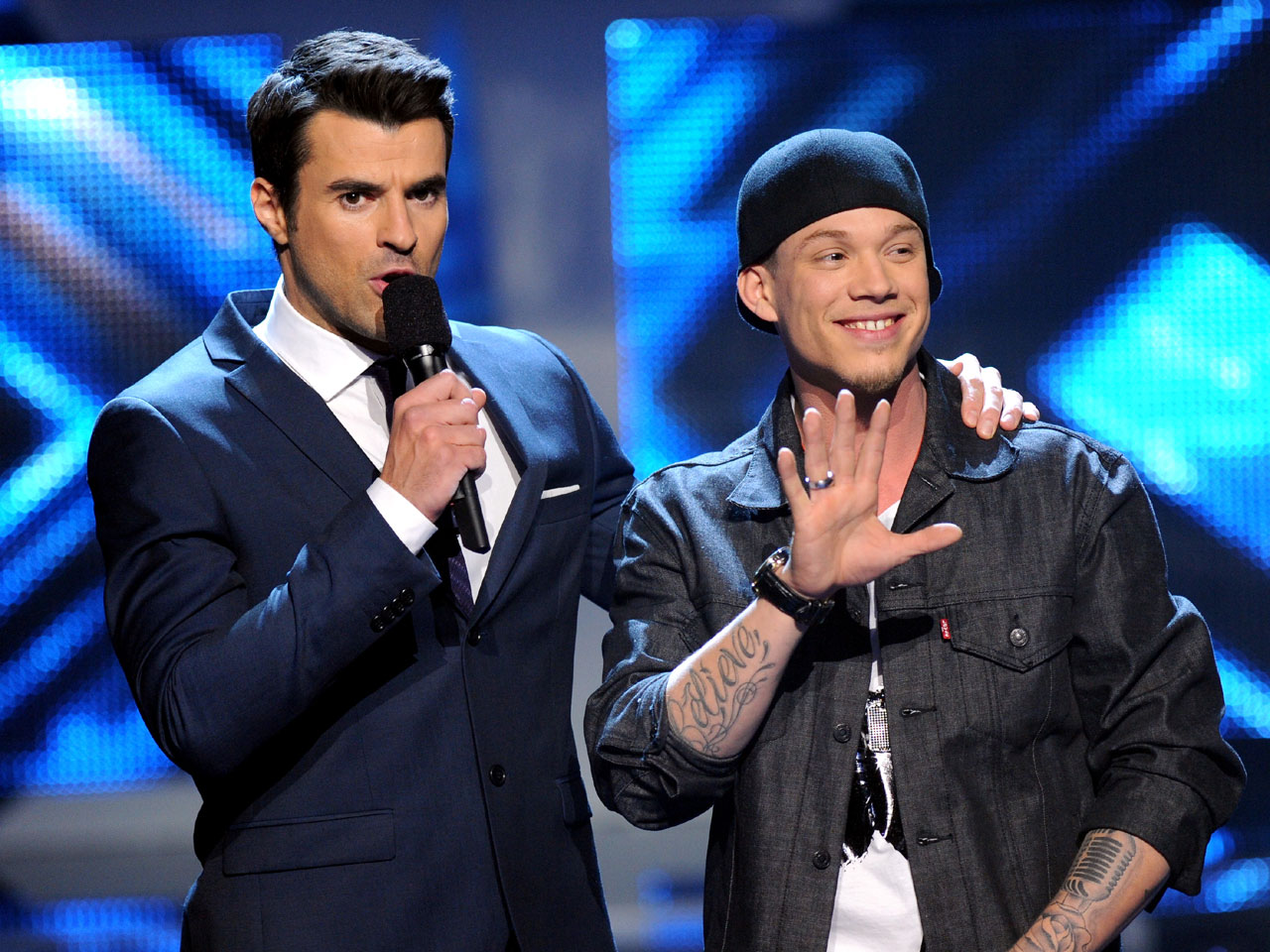 Were these the words of some extra-competitive warbler on last night's "The X Factor"?

Oh, of course not. They're all sweet people. These were the words of the extra-competitive potentate himself, Simon Cowell, referencing his fellow judges.

He was miffed, allegedly, that his mentee Drew had been sent home by his three employees. The two lady judges - Paula Abdul and Nicole Scherzinger - had received death threats to commemorate their decisions to send Drew into oblivion's jaws.

What could possibly be more dramatic this time? Well, how about the five aspiring artists having to sing not once, but twice? Think of the possibilities for failure, pain and metldown?

Idiotically, they first had to sing a dance tune, which, for some of them, was the equivalent of asking a deer to make like an elephant.

Melanie Amaro tried to channel her inner Whitney Houston into some kind of Donna Summer. With twenty robot dancers who had been cloned from the Fox NFL mascot, Amaro tried to stay true to herself as the boom-titty-boom of the beat bottomed out around her.

It was just slightly reminiscent of when Barbra Streisand had accompanied Summer on "Enough is Enough."

But wait a minute, she was singing Adele's "Someone Like You." Since when has Adele been dance music? Since Simon Cowell said so, it seemed.

"What I love about that was that it wasn't karaoke," said Cowell, who really doesn't like karaoke.

The other judges conformed.

Marcus Canty, as identity-free as an own-label potato chip, came out in a shiny suit and trilby. "Aint' Nobody" was the song. This really was nobody trying to be Chaka Khan's love child.

You might at times have been pressed to realize this was a Khan song, given Canty's liberal choice of notes.

Still, Nicole Scherinzger got on her direct line to heaven in order to tell the very religious Canty: "You took us to church and to a dance club at the same time."

Cowell denied this. He wasn't aware of any plan he had. No, wait. He actually said: "That was a very good performance."

Rachel Crow still hasn't shaken the impression that she is a little girl trying to act older than she is. There is still something very slightly freak show about her when called upon to perform a dance tune.

Her performance of "Beautiful Girls" wasn't karaoke. It was glorified karaoke, its essential karaoke nature enveloped in a slick presentation.

Crow can sing, but she still at times gives off the notion of a slightly older Shirley Temple.

L.A Reid told Crow she was a star.

"I'm just waiting for the Rachel Crow doll to come out," said Scherzinger, not a known collector of dolls.

Josh Krajcik must have thought it a peculiarly painful comedy to be forced to perform dance music. It was as if Joe Cocker had been asked to perform some gruesome Chris Brown.

The self-proclaimed soul singer cheated as much as he could. He borrowed some of Coldplay's cello sounds, offered a little drama for the verse and then prayed his way through the superficial chorus of this doleful Rihanna ditty - "We Found Love."

Thankfully, these dance performances were kept short and relief showered down Krajcik's eyebrows when he was finished.

"In the recording world, I could never see you do that song ... So I couldn't believe it," said Reid.

Then why make him do it?

"Twice in a row you've got it wrong," Cowell told Scherzinger with pointed pointlessness.

Chris Rene needed as many backing singers as possible to drown out the weakness of his voice for this performance. His version of TI and Rihanna's "Live Your life" was suitably energetic without being anything other than mimicry.

"It sounds like it's your own song," crooned Scherzinger, who praised his re-writing of the verses.

Talking of charisma and presence, Steve Jones - aka Mannequin Man - revealed that contestants would not be singing the viewers' choices that they'd prepared (there had, allegedly, been "an error"), but their own. They'd hardly had any rehearsal time.

These were, in fact, their "save" songs. Surely this was another staged piece of hubristic nonsense. The "error" was never explained. Why would it be?

Amaro went to her diva heart. Her "When You Believe" was no miracle. But, because she can sing, she's a little harder to criticize. Naturally, the combined forces of the resident gospel choir were there to lift the spectacle.

"Safe, but amazing," said Reid, with some accuracy.

There is little contemporary about Amaro. She appeals to the older far more than to the younger. She is simply another in a tradition.

Cowell then reminded everyone to vote, vote, vote. "Remember what happened to me last week," he explained. Yes, to him. He'd been crossed. He didn't want it happening again.

The revelation of Canty's second performance - by far the best of his time on this show - was that he can actually sing the right notes all the way through. The advantage here was that he didn't have to dance, so perhaps that cleared his vocal chords and nasal passages. His version of Ray Charles' "A Song For You" was actually watchable and listenable.

"You remind me of a young Al Green," said Scherzinger. Abdul gushed too.

"I'm not jumping out of my chair," sniffed Cowell. He claimed he'd heard the song done that way many times of these sorts of competitions. "It was boring," was his summary.

Crow is said to be fearless. So here she was offering Michael Jackson's "Music and Me."

Crow's singing was good, but the effect is still odd.

"I love that you picked that song for yourself," said Reid. "You're the star that we always thought you were."

He also mentioned that Hollywood was already showing interest in spiriting her away to its loving bosom.

"My mission is just to inspire the kids," said Crow, as if she'd forgotten that she is as kid as it gets.

Krajcik's mission is to get through this show with some inspiration and integrity still clinging to his hair.

He chose The Beatles' "Something." What could he add to something so classic? Her offered an unplugged, pure, genuine, personal version. The very opposite of, well, a dance number.

"You looked actually insane half way through," said Cowell, who knows insane.

Rene decided to perform one of his own songs, "Where Do We Go From Here?", perched on a stool with his guitar.

With an odd suddenness, he appeared strangely genuine. This effort wasn't entirely hummable, but it was entirely refreshing.

"You have to trust the universe," said Abdul, continuing the space symbolism.

"It's either stupidity or a stroke of genius," said Cowell of Rene's song choice. He then declared it was the latter.

Until this point, Rene had been a bland presence. With one excellent vocal performance, he was a contemporary artist.

That's what television can do. It makes stars in an instant, fools in a trice, and 12 million viewers beg for more drama.