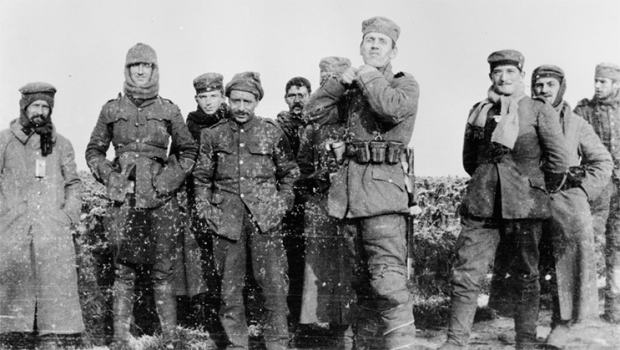 The Christmas dream of "Peace On Earth" briefly came true one hundred years ago. Mark Phillips has the story of the Christmas Truce of 1914:

The old line about never letting the facts get in the way of a good story could have been invented for this scene. The facts are as slippery as the muddy football field -- and the story is so good, it's still being told, even embellished, a hundred years later.

On the 100th anniversary, the encounter has been re-staged at one of the places along the old front line in Belgium where the truce originally occurred.

The men (the story goes) not only exchanged greetings and gifts; they organized a soccer game between teams from the two armies -- boots and balls instead of bullets and bayonets.

"It's Christmas, good will! Let's just be friends for the day," said Chris Barker, whose three great-uncles were killed in the war not far from here. He says the truce should be remembered because it shows a different side to a war more known for wholesale slaughter than humanitarian gesture.

"I think it just shows the good in people that can be there," he said. "Whereas days before and afterwards it was barbarous and savage, but people can suddenly lay down their differences."

The truce is now be seen as a triumph of the human spirit, an interlude of reason in the madness of war. And it may have happened because the FULL madness of this war hadn't happened yet.

This was Christmas 1914, just a few months after the outbreak of hostilities. A lot of these troops were green, not yet bloodied by the horrors to come.

At the Imperial War Museum in London, historians like Alan Wakefield say the bitterness and hatred had not yet taken hold.

"The war hadn't got that sort of, as you say, dirty at that stage," said Wakefield. "It's really 1915 that things like poison gas comes along. Zeppelin airships are bombing London, Germans sink the liner Lusitania with civilian casualties. And the propaganda machine hasn't really fed on that and actually created those sort of hatreds between the two forces."

There are varying accounts as to what happened in the trenches along the front lines. The diaries of some British soldiers say they heard calling from across the way from the German line saying, 'If you don't shoot, we won't, either"

It's unclear who stuck their heads up first, the British or the Germans. But before long troops were flooding out of trenches on both sides of the line and moving through the wire into "no man's land," and -- boys being boys -- pretty soon, a ball appeared.

The ball has become the symbol of the truce. It has pride of place in a new memorial in the old battlefield.

It's kicked around in commemorative schoolboy games, with the kids in appropriate uniform . . . and of just about appropriate age.

And, with a suitably bilingual version of "Silent Night" (just as it was reputably sung by the opposing armies a hundred years ago), teams from the modern British and German armies squared off in what was called The Game of Truce.

The idea is so deeply ingrained in the collective memory, it's been made into a feel-good Christmas ad for the Sainsbury's supermarket chain.

To watch the ad click on the video player below. (There is also a video about the making of the ad.)

There's only one thing wrong with this picture -- it's probably not true. A British-German soccer game likely never happened.

Back at the War Museum they've combed through the pictures and the diaries and the letters and found... not much. Hearsay. Not a single first-hand witness.

"If it happened -- and there's very few collaborative accounts -- there's second-, third-hand accounts of somebody hearing of a game going on somewhere," said Wakefield.

Whether or not an actual soccer game took place is a matter of historic debate. But it almost doesn't matter. The game has become part of wartime mythology. If people think it happened, it happened.

And there's one other outstanding question: the score. There's no definitive report on who won the game.

"Actually there are a couple of reports which are uncorroborated," said Wakefield. "But it's said that it was 3-2 to the Germans.

"Probably on penalties!" he laughed.

But again, why let the facts get in the way?

A home made from shipping containers
Thanks for reading CBS NEWS.
Create your free account or log in
for more features.
View CBS News In
CBS News App Open
Chrome Safari Continue
Be the first to know
Get browser notifications for breaking news, live events, and exclusive reporting.