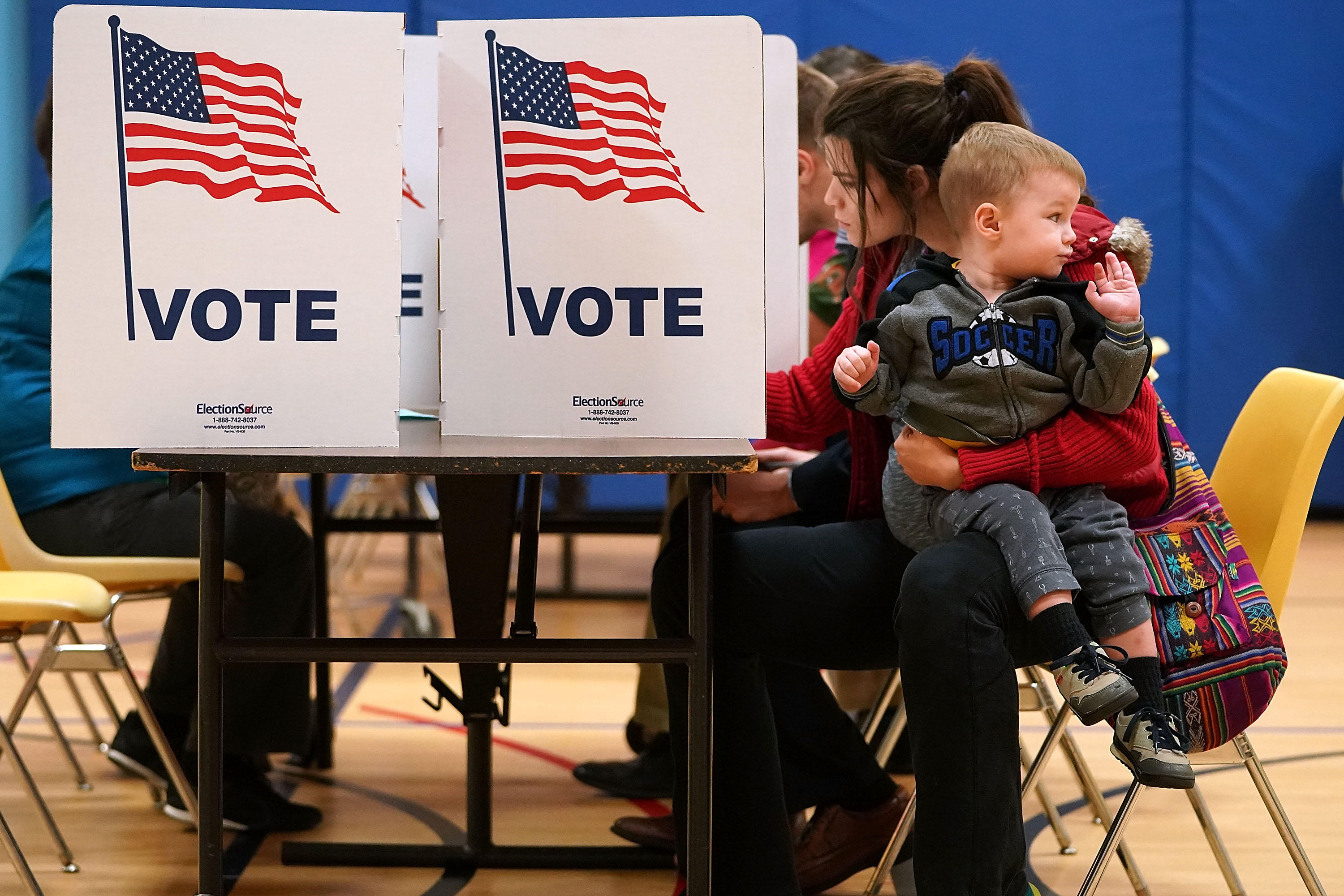 Look for some of the 2020 Democratic presidential contenders at the We the People summit, organized by more than a dozen national progressive organizations, in D.C. on Wednesday, June 13. Sens. Cory Booker; D-New Jersey, Kirsten Gillibrand, D-New York; Kamala Harris D-California; Bernie Sanders, D-Vermont; and Elizabeth Warren, D-Massachusetts will all address the gathering. Warren and former Planned Parenthood president Cecile Richards are also scheduled to speak at the ACLU Membership Conference in D.C. on Monday, June 11.

Tuesday, June 12 will be primary day in five states: Maine, Nevada, North Dakota, South Carolina and Virginia. There is not really a marquee primary race on Tuesday that should dramatically affect the outcome of the midterms, but many of these seats will be critical in the fight for control of the House and Senate in November's general election.

The Democrats need to flip 23 Republican-held districts to take control of the House of Representatives this fall, and CBS News rates 4 of the House districts facing primary elections on Tuesday as "very likely" or "probably" competitive in November (ME-2, NV-3, NV-4, and VA-10).

Maine, Nevada, North Dakota and Virginia each have one Senate primary election on Tuesday. In North Dakota, Democratic incumbent Sen. Heidi Heitkamp is running unopposed, and Republican Rep. Kevin Cramer is expected to win the primary on Tuesday.

In Nevada, Republican incumbent Sen. Dean Heller is expected to face off against Democratic Rep. Jacky Rosen in November.

Maine's incumbent independent senator, Angus King, and Virginia's incumbent Democratic senator, Tim Kaine, are both largely expected to keep their seats in the fall. On Tuesday, three Virginia Republican candidates are competing for the opportunity to challenge Kaine in November's general election.

There are gubernatorial primaries in Maine, Nevada and South Carolina. In Maine, four Republicans and seven Democrats are running to succeed Gov. Paul LePage. Maine now uses a ranked-choice system. The Wall Street Journal explained how this works: "In contests with three or more candidates, voters rank the candidates in order of preference. If no candidate gets more than 50% of the first-choice votes, a process is triggered in which the lowest-ranked candidate is eliminated. The voters whose first choice was eliminated then have their ballots reallocated to their next highest-ranking choice. This process continues until two candidates are left and someone has majority support."

"The math is not favorable to the Democrats. They have very vulnerable incumbents in other states, to be able to flip this seat would be a big deal for them in trying to take over the Senate. There are going to be tremendous resources spent here."

In South Carolina, Republican Gov. Henry McMaster, who was elevated from lieutenant governor to governor when Nikki Haley was named U.N. ambassador by President Trump, faces a competitive primary challenge from his own party despite Mr. Trump's backing. Four other Republicans are vying to be the gubernatorial nominee, and McMaster could face a runoff with either Mount Pleasant attorney Catherine Templeton or Greenville businessman John Warren, according to The Post and Courier. Three Democrats are competing to be South Carolina's Democratic gubernatorial candidate, and state Rep. James Smith is the presumed frontrunner.

What to watch for

How will red-state Senate Democrats navigate the Trump era?

This fall, there are 10 incumbent Democratic senators up for re-election in states that Donald Trump won in 2016. In North Dakota, incumbent Democratic Senator Heidi Heitkamp is fighting to be re-elected in one of the most Trump-friendly states. Mr. Trump won North Dakota by 36 points in 2016, and his approval rating in the state is north of 50 percent, according to Gallup polling conducted earlier this year. A May 2018 CBS News poll found that Mr. Trump's national approval rating is 40 percent.

So how will Democratic senators fare in states where Mr. Trump won and remains more popular than the national average? Will they hold their punches against the president, or stand up to him when they disagree? The AP points out that in North Dakota, Heitkamp has chosen a mix of both as she seeks to relay to North Dakotans that she is fighting for their best interests. She has championed Mr. Trump's de-regulation policies that benefit North Dakota's farmers and mining industry and has voted to confirm the majority of his Cabinet and judicial nominees. But at the same time, she has criticized Mr. Trump for his trade policies that could hurt North Dakota's farmers and ranchers. Will Heitkamp's efforts be enough to win re-election, or will these red state voters reject any Democrat that Trump opposes?

"Frankly I think that Democrats, nationally, are not counting on North Dakota as a place to pick up a House seat."

How will vulnerable incumbent Republicans demonstrate independence from Trump in the general election?

In Nevada, Senator Dean Heller will likely be in the political fight of his life against Democratic candidate Jacky Rosen this fall. He is the only incumbent Republican senator running in a state that Hillary Clinton won in 2016. Heller's relationship with Mr. Trump has been rocky to say the least. In 2016, he was a vocal opponent of then-candidate Trump.

But as CNN notes, after Mr. Trump made a not-so-subtle threat that he might oppose Heller's re-election efforts if he bucked him on health care, Heller softened his criticism of the president and voted to repeal Obamacare and to reform the tax code. Mr. Trump ultimately endorsed Heller and helped convince Danny Tarkanian, his primary Republican challenger, to run for the House instead. Although his worst primary fears were averted, Heller's support for Mr. Trump's policies may hurt him in the general election.

Nevada expanded Medicaid, and its current Republican Gov. Brian Sandoval strongly opposes Obamacare repeal efforts. In addition, Mr. Trump's immigration rhetoric and policies may also hurt Heller in Nevada, where approximately 17 percent of eligible voters in 2016 were Hispanics. The Hill points out that Heller is distancing himself from the president on a local issue that matters to Nevadans, confronting the Trump administration over its plans to reopen the Yucca Mountain nuclear waste facility.

Meanwhile, in Northern Virginia's competitive 10th District, incumbent Republican Rep. Barbara Comstock managed to hold onto her seat in a district that Hillary Clinton carried in 2016. Mr. Trump's approval rating in Virginia is below the national 40 percent, according to Gallup polling conducted earlier this year.

During the 2016 presidential election, Comstock called for Mr. Trump to step aside for the good of the party following the release of the now-infamous "Access Hollywood" tape. Now, she faces a primary challenge from Shak Hill. Although Comstock is the clear favorite to win the primary on Tuesday, she has faced repeated attacks from Hill that she is a "Never-Trumper" who is not conservative enough for Virginia.

Comstock has largely voted in favor of Mr. Trump's policies since he took office, and as the Washington Post points out, her campaign mailers remind voters that she is pro-border wall, pro-life, and pro-2nd Amendment. But Comstock's campaign is not just focused on red-meat issues. Comstock is a leading voice in the charge to reform sexual harassment reporting on Capitol Hill, and she has also bucked the Republican party on some key issues. Comstock voted against a Republican effort to repeal Obamacare because it didn't protect people with preexisting conditions. She also sided with House Democrats and voted against an amendment that would have blocked an Obama-era practice requiring the Pentagon to pay for gender transition surgeries and hormone therapy.

Will this be another good night for female and first-time candidates?

In Maine and Nevada, two female Democratic candidates endorsed by EMILY's List -- Janet Mills (Maine) Chris Giunchigliani (Nevada)-- are hoping to win their party's nomination and compete to become the first female governors in their state's history.  In Nevada's competitive 3rd district left vacant by Jacky Rosen as she pursues a run for Heller's Senate seat, Susie Lee, a nonprofit leader and education advocate, is expected to win the primary and face off against Republican Danny Tarkanian in the fall.

In Virginia's competitive 10th district, three Democrats are leading the field in the fight to take on Comstock this fall, including two women -- Alison Friedman and state Sen. Jennifer Wexton. Friedman is a single-mom and former State Department official in the Obama administration. She is a first-time candidate who was inspired to run for office after her 9 year old daughter wrote a letter to President Trump about kindness. Elaine Luria, a small business owner and former Navy commander who served 20 years, is hoping to take on incumbent Republican Scott Taylor in Virginia's 2nd District.

The 5th District Democratic Committee voted to have a primary convention instead of a traditional primary. The convention was held in May, and Leslie Cockborn, a first-time candidate and journalist for 35 years who worked as a producer and correspondent on programs such as CBS News' "60 Minutes" and PBS' "Frontline, secured the Democratic nomination. The 5th District Republican Committee also held a nominating convention on June 2 instead of a primary, and Denver Riggleman, a craft distillery owner and former Air Force intelligence officer, was selected to be the party's nominee in the fall.