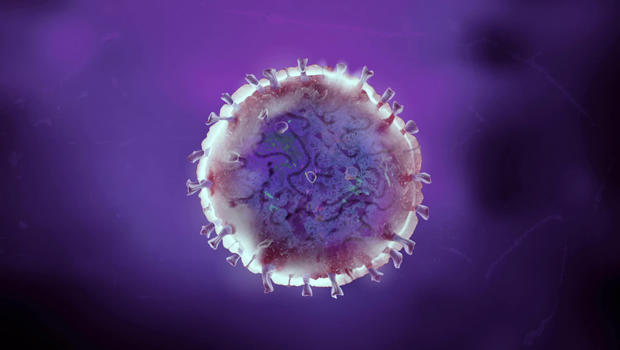 Poet Jackie Wang fills her quarantine days with the peaceful sound of her harp. But her dreams at night tell a different story. "I had an airplane dream where we were flying into a dark cloud," she said. "And I was like, 'Oh, no, this plane needs to be grounded. This is not good.'"

Metaphors fill the pages of Wang's dream journal, which these days reads like a psychological thriller: "I dreamed that someone dreamed of a dead person on a gurney …"

Spencer asked, "Can you summarize for me the general impact you feel that the pandemic has had on your dreams?"

"It's made my dreams more vivid," Wang replied. "And I've been having dreams with recurring apocalypse and economic desperation."

And dreams reflecting anxiety: "I had a dream that I was preparing for my wedding, but I had huge cases of toilet paper," she laughed.

Harvard psychologist Deirdre Barrett noted, "Most people who are a little chronically sleep-deprived are staying at home, and not going into work at their usual time."

"The longer you sleep, the more likely you are to dream?"

Barrett studied dreams after 9/11, and is now collecting pandemic dreams – more than six thousand so far.

Though this is an ongoing study, the single takeaway Barrett has seen so far is, "the world's dreams are more anxious than at normal periods in time."

And less literal than dreams after 9/11: "I see fewer dreams overtly about the pandemic than people who dreamed about buildings falling down, or planes crashing into them, and somewhat more metaphors," Barrett said. "And I think that is because the virus is a kind of invisible menace," leading our dreaming mind to put a strong visual image to the anxiety, by dipping into our "image banks."

One popular image, noted Barrett: "I've seen just dozens of every kind of bug you can imagine – flying, swarms are racing at the dreamer, grasshoppers with vampire fangs. And I think it's partly because we use the word bug as slang for [virus]; you know, 'I've got a bug' means 'I've got a virus.'"

When asked the most outlandish dream reported to her so far, Barrett replied, "The most outlandish scary dream was where Oprah was rounding up people to be her audience, and her henchmen were imprisoning them in a giant warehouse that had mattresses spaced six feet apart. And then at the end of the dream Oprah bursts into the warehouse ready to do her show and kind of in show-biz style she says, 'Some of our guests today are getting a very big surprise!' and she pulls out a chainsaw and comes at the dreamer!"

Unlike the nightmare of a chainsaw-wielding Oprah, some pandemic dreams simply reflect reality. "I've had a couple of dreams where everybody is in little Zoom boxes," laughed artist Sandra Haynes.

Haynes had one spectacular dream, now part of the Harvard study: She was an antibody, a superhero fighting off the virus, which took the form of a ferocious dog: "So, what I did is, I grabbed the leash of the dog, and I went was, like, spinning it around over my head!" she laughed.

The Egyptians thought dreams were messages from the gods; the Greeks saw them as visits from the dead; and Sigmund Freud was sure dreams involved sex.

But why do we dream?

"No one knows for sure," said Mississippi State University psychology professor Michael Nadorff. "But what seems to be the case is that during REM sleep, the part of our sleep where we mostly dream, this is when our memories get consolidated."

Nadorff focuses less on the meaning of dreams, and more on how we can control them, especially the scary ones. He described a treatment called Imagery Rehearsal Therapy: "We take the dream you have, and we tell you to change it any way you want. And then we want you to practice it using visual imagery for about twice a day, but ten minutes each time. And a good number of people actually start having that new dream that they created."

Nadorff said it worked with one client whose father had passed away before his grandchildren were born: "And he said, 'You know, I really would love to have a dream where I'm going to the park and I'm taking my kids, and my dad's there and he gets to see them playing and gets to meet my kids.' So, we gave it a try, and the very next session he comes in and just tells me, you know, in tears, 'I had that new dream, and it was just so meaningful.'"

Which prompted a question to Harvard's Deirdre Barrett: "Are you worried about people's general mental health because of these dreams we're having?"

"No," she said. "I think people are having, for the most part, very healthy, normal reactions to this situation."

With one exception: Barrett does worry about healthcare workers on the front lines: "The healthcare workers are having just full-on post-traumatic nightmares.  There was one Italian anesthesiologist who was trying to intubate somebody in a dream, and he fell backwards out of the window of the hospital, clutching the patient with him as he fell, and he landed on the ground okay, and the patient was decapitated."

Barrett says for those suffering PTSD, counseling may be needed.

And for the rest of us? Jackie Wang said she is just trying to take the situation day-by-day, despite the uncertainty.

Spencer asked, "Do you see your dreams as some sort of coping mechanism?"

"Yeah, I think that it's a coping mechanism that you don't actually ask for," Wang laughed. "When I'm asleep, everything that I've bottled up kind of comes spilling out."

How much does missing student loan payments hurt your credit?

Novavax shares plunge on weak demand for its COVID-19 vaccine

Are "Novids" special or just lucky at avoiding COVID-19?
More
Thanks for reading CBS NEWS.
Create your free account or log in
for more features.
View CBS News In
CBS News App Open
Chrome Safari Continue
Be the first to know
Get browser notifications for breaking news, live events, and exclusive reporting.