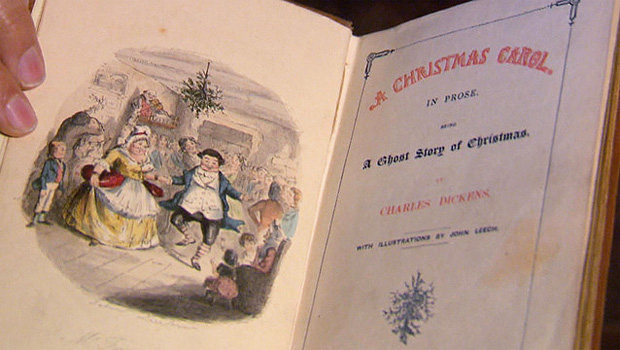 'Tis The Season for classic Christmas stories -- which is why so many readers say "What the Dickens!" Mo Rocca has been to London:

If you want to see London through the eyes of Charles Dickens, tour guide Richard Jones is your man.

"This is the heartland of Dickens' 'Christmas Carol,'" he said. "This is where we have Scrooge's counting house. It's based in the alleyways of the heart of the City of London.

"It's a foggy Christmas Eve, and the gas lamps are lighting up. You can imagine the people coming out of doors and they're coughing and they're wheezing and they're rubbing their hands together, stamping their feet, desperate to keep warm. And this is where it all begins."

And any talk of Dickens in December conjures only one thing: "A Christmas Carol."

"No Christmas is complete without somebody in the family taking out the copy of 'A Christmas Carol' and reading it to the household." said Jones.

"A Christmas Carol," published as a novella in 1843, tells the story of Ebenezer Scrooge, a miserly and miserable old businessman, who on Christmas Eve is haunted by three ghosts -- Christmas Past, Christmas Present and Christmas Future -- ultimately deciding to mend his ways and spread cheer all around him in an ending sweeter than a figgy pudding.

But you already knew that. What you may NOT know is Dickens' personal connection to the story.

"Dickens, in his childhood, had faced great hardship," said Louisa Price, the head curator of the Charles Dickens Museum. "His father was riddled with debt troubles. And at one point his father was thrown into jail for debt, and at that time as a young boy, only 12 years old, he had to work in a blacking factory, to make ends meet and to support his family."

Price says those early experiences influenced much of Dickens' work. With "A Christmas Carol" he wanted to address the serious social ills that continued to plague the poor in Victorian England.

The museum is in the London house where Dickens -- already established -- once lived with his family.

The Dickenses' own Yuletide traditions show up in the story, and influenced the way readers celebrated Christmas. "There are records of various people in London who decided, after reading 'A Christmas Carol,' that they were going to go out and buy a turkey, and make sure that that was part of their Christmas meal," said Price.

In the 172 years since it was first published, "A Christmas Carol" has never been out of print. It's been adapted into stage productions and at least 50 movie and television versions.

It may surprise you which one our experts think is the most faithful: "I think that you probably can't go wrong with 'The Muppet Christmas Carol,'" said Price.

"For many it seems that the story of 'A Christmas Carol' has become the meaning of Christmas," said Rocca.

"It has for many people," said Jones. "'A Christmas Carol' is an integral part of Christmas, and it has been since it was written in 1843. The interesting thing is, I often refer to it as being the second most-famous Christmas story ever told."

"It's almost like a Christmas present in its own right," said Jones. "It's Dickens' present to the world."