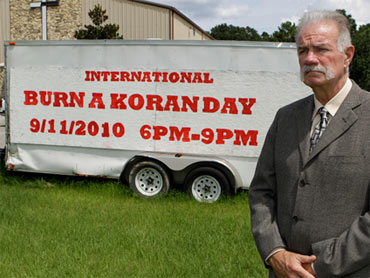 Pastor Terry Jones' plan to burn copies of the Quran on Sept. 11th has left media outlets, including CBS News, with a difficult decision to make: How to balance their responsibility to cover the news with their desire not to contribute to an event that may well put soldiers and civilians at risk.

The planned Quran burning was already generating "Death to America" chants in Afghanistan by Monday, prompting Gen. David Petraeus to warn that "images of the burning of a Quran would undoubtedly be used by extremists in Afghanistan - and around the world - to inflame public opinion and incite violence."

But the images are a huge part of the story, and if Jones goes forward with his plan, news outlets must decide whether or not to broadcast them. The Associated Press has already stated that it will not show images of a Quran being burned; in a memo, as the New York Times reports, an editor said its policy is "not to provide coverage of events that are gratuitously manufactured to provoke and offend."

Some Call for "Burn the Stars & Stripes Day"

CBS News is not offering specifics on how it plans to cover the event: In a statement, the news division would say simply that "We will cover the story with the appropriate context, as we would any other news story." Other broadcast networks have put forward similar statements.

Fox News, on the other hand, has said it will not cover the Quran burning; in an interview with the Baltimore Sun, senior vice president Michael Clemente said, "We do not cover every flag burning that happens in this country. We don't run every hostage tape."

"If we tried to cover everyone who wants us to stick a camera in front of them, we'd run out of cameras pretty fast each day. But this is really about just using some judgment," he added.

Of course, Jones, despite his tiny congregation and fringe beliefs (White House press secretary Robert Gibbs quipped on Thursday that "the fact that he has more people at his press conference than he does in his pews at a Sunday service is an illuminating thing"), is not your typical publicity seeker: he has become a symbol, however flawed, of American attitudes toward Islam to much of the world.

One might blame the media for that. Why should such a minor figure, it's fair to ask, generate such intense media coverage? And while that's a legitimate question, the reality is that in the Internet age, a provocation like "International Burn a Koran Day" can become fodder for terrorist recruiters before many members of the media even know it exists.

Indeed, most media outlets ignored the story until Petraeus chimed in - and he did not make his comments until protests had already broken out in Kabul. The general and the officials who followed him in commenting - among them President Obama - appear to have decided that there was little to be lost in acknowledging the event because it had already garnered significant attention in the Muslim world.

For media outlets, covering the Quran burning becomes a lot more complicated if and when it takes place on Saturday evening. News outlets want to bring compelling images to their viewers, and there are few news consumers interested in the story who can honestly say they do not want to see what the event ends up looking like. At the same time, news outlets don't want to aid terrorist recruiters who would use their images, video and description of the burning of the Islamic holy book to win over converts.

Kelly McBride of the Poynter Institute wrote to members of the media Thursday that "how you choose to cover Saturday's stunt says something about your values."

Among her recommendations for reporters are not to go to the event and instead gather information remotely (in order not to contribute "to the circus-like atmosphere"), be judicious in what images to put forth, and put the event in context by noting the near-universal opposition to his actions.

"In fact, because Jones is so isolated in his beliefs, his actions don't really mean anything," she writes. "Making him seem more significant than he is distorts the truth."

Pastor Will Not Cancel Quran Burning

Jones: Judaism, Other Religions "Of The Devil"