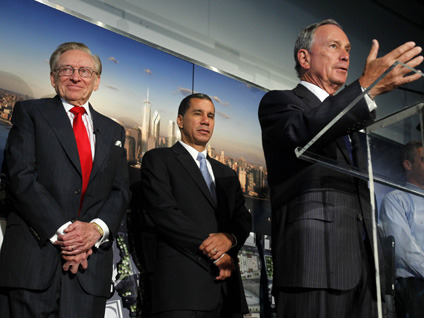 At a news conference yesterday, New York Mayor Mike Bloomberg defended the right of a small Florida church to hold a Quran-burning rally on the upcoming anniversary of the September 11 attacks, saying that although he said he found the plan "distasteful," it was protected by the Constitution.

Bloomberg, who has been an outspoken advocate of allowing for the construction of an Islamic community center near Ground Zero, said in a news conference that while going through with the event could put "our young men and women overseas and America itself in greater danger than it was already," he could not endorse censorship of the First Amendment, according to the Wall Street Journal.

"In a strange way I'm here to defend his right to do that," Bloomberg said, of Terry Jones, the pastor from Florida's Dover World Outreach Church in Gainseville, Fla., who is behind the proposed rally. "I happen to think that it is distasteful...But the First Amendment protects everybody, and you can't say that we're going to apply the First Amendment to only those cases where we are in agreement."

Jones, who incited heated controversy when he announced the Florida church's plan to protest the 9/11 attacks, has so far refused to yield to pressure to back down from religious and national leaders including Gen. David Petraeus, who urged Jones to reconsider on the grounds that such a demonstration could bring increased danger to U.S. troops in Afghanistan and elsewhere.

"We are still determined to it, yes," Jones said this morning on the CBS' "The Early Show."