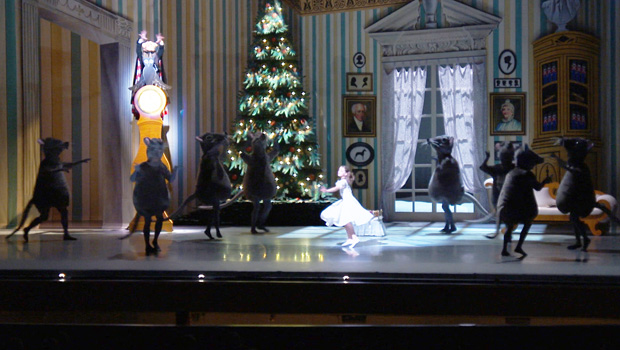 For many of us, the holidays would not be complete with the pirouette of a Sugar Plum Fairy at "The Nutcracker," the most popular ballet in America, hands down.

Why is that? "It's that element of escape and humanity," said Peter Boal, artistic director at Seattle's Pacific Northwest Ballet. "I think people see themselves in it. And they're wonderfully entertained.

"I think, actually, in the world today, it's more and more of a rare escape to have an experience like that. And I think people don't want to lose that special moment in their lives and their family's lives."

I'd been to countless Nutcrackers in Seattle over the years with my family. But this year was different. I wanted to understand this ballet from the inside.

I wanted to dance it.

But could such a hugely important part of the American ballet scene be learned by someone in an afternoon? "Well, only a very wise person can do it in an afternoon, so we're banking on that," said Boal.

I was given the role of a mouse for one night, and one night only -- a role normally played by a real, actual dancer, Ezra Thomson.

Does this mouse have a specific name? "He's Number Two, or we could call him Cheddar," said Thomson.

And what would be Cheddar's motivation? "Mostly to scare Clara and to fight the little toy soldiers," he replied.

The ballet company does have something of a tradition of allowing local "celebrities" minor walk-on roles, but I quickly realized, I was out of my league. My goal was simple: Don't ruin this beloved holiday tradition.

In fact, "The Nutcracker" wasn't always so beloved. Its premiere in 1892 in St. Petersburg, Russia, actually got terrible reviews.

"I don't think people thought that it had this huge future," said Boal. "People felt that there wasn't enough dance in it, that Tchaikovsky did an adequate score but that it wasn't a milestone ballet. Which is ironic, 'cause it is THE milestone ballet!"

It was almost show time, so to calm my nerves, I turned to a group of dancers with much more experience than I had. The kids demonstrating their best "mouse" -- lots of whiskers.

"I rehearsed but I wasn't paying attention," I said.

"You're in trouble," said one girl.

Finally it was time for my big moment -- and then, in the twinkle of a Christmas tree light, it was all over and I was backstage.

They hustled the costume off of me, since Ezra, the REAL dancer, needed it for the next scene.

The beginning and the end of my ballet career.

Who knows if they'll ask me back next year? Some of my spins could've been better. But isn't the beauty of the holidays the fact that, whether you're trimming a tree, wrapping a present, or dressing like a mouse in "The Nutcracker," it doesn't have to be perfect, to be something special.