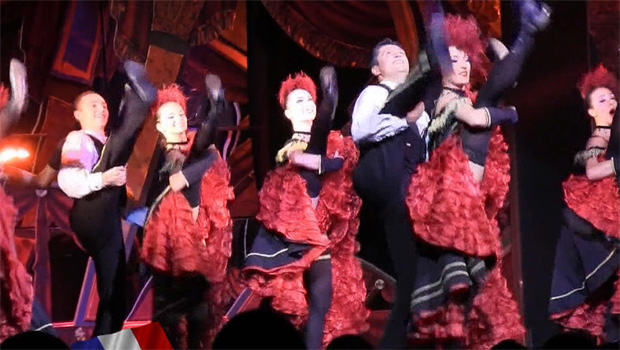 Can a dance define an entire city? According to David Turecamo, Our Man In Paris, it "can-can"!

There was a time when the cancan was considered so scandalous that the police would sometimes raid the dance halls where it was performed. But that's when ladies didn't show their ankles, much less their underwear.

Well, today the cancan is as familiar a symbol of France as the Eiffel Tower. How'd that happen?

It's gained enough respectability that, six nights a week at the Cabaret Paradis Latin in Paris, tourists and families come to see it performed. And once a month the club even offers a workshop for anybody willing to spend two hours and about a hundred dollars to learn.

"It's a dream, a little girl's dream, to wear the dress, the make-up, the hairdo," said Chloe, one cancaner.

"It's a really happy dance," said choreographer Marie Laure Fillipon. "There is intensity, screaming. It is very French."

Actually the word cancan is old French slang for malicious gossip -- something like talkin' trash. No one's sure where that came from, but the origins of the dance go back to the early 19th century.

It was the beginning of the Napoleonic era, of empire-building ... a century in which France was constantly at war -- literally dozens of campaigns.

So with that in mind, look at the choreography: There is the chase, like a charge; the cavalry (right shoulder arms!), like the military carrying a rifle (it's the "port d'armes"). And then there is the "battement," which means beating -- thinking of a line of marching drummers.

The cancan was becoming a sly commentary on the times, and by the 1890s it was so popular you could find it performed in dance halls all over Paris, like the most famous of all, the Moulin Rouge

It's an era that's inspired dozens of movies, like Baz Luhrman's 2001 blockbuster, "Moulin Rouge." There was Cole Porter's 1960 musical "Can-Can," starring Frank Sinatra and Maurice Chevalier, which is about the best that can be said for it.

And in 1952 there was "Moulin Rouge," directed by John Huston. It starred Jose Ferrer as the artist who would create the indelible image of the cancan, Henri Toulouse Lautrec.

Lautrec was barely 30 and an unknown artist when he painted a poster as an advertisement for the Moulin Rouge. A congenital disease had stunted his growth, and he hid in a world of dance halls and bordellos.

He was well-acquainted with the woman at the center of his painting: Louise Webber, known as La Goulue (which means the glutton). She was the highest-paid entertainer in Paris at the time, and considered the greatest cancan dancer of all ... so skilled it's said she could kick the hat off a man's head.

Lautrec's poster celebrated (left), well, something more than her dancing, as Mary Weaver Chapin, curator of prints at the Portland Art Museum, explains:

"The 1891 poster for the Moulin Rouge made Lautrec's reputation overnight. Although today the image might seem a bit banal -- we've seen it on coffee cups, mouse pads, tea cozies -- but at the time people understood it for what it was, this very dirty joke advertising the Moulin Rouge. If you notice her dance partner, he's that shadowy figure in the foreground, notice where his thumbs are placed. We've got one thumb pointed directly between La Goulue's legs and the other thumb is positioned rather 'erectally' near his groin."

"It was seen as outlandish, as a slap in the face to the moral bourgeois order," said Chapin.

But if the cancan was the 19th century pole dance for men, for women it represented something much more profound.

When the Moulin Rouge opened in 1889, it was only about 20 years after Susan B. Anthony had published "The Revolution." It was just that -- a turning point in the history of women's rights. And her message soon traveled form the United States to Europe. So when this poster was plastered all over the walls of Paris with its image of La Goulue lifting her skirt and kicking her legs in the air, well, French women saw a defiant, independent woman.

Maybe today the cancan seems a quaint reminder of a bygone era, but Louise Webber, La Goulue, who died in 1929, is still remembered by the French as the woman who helped spark a revolution with the cancan.

As choreographer Fillipon said, "It's almost a feminist dance."

Norman Lear on laughing at what ails America