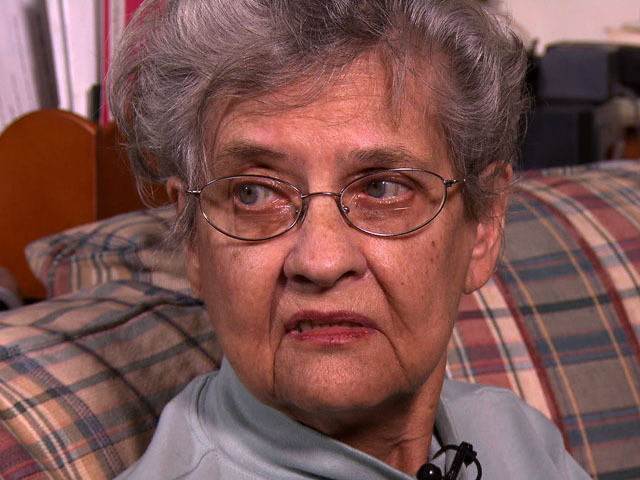 (CBS News) A new study in the New England Journal of Medicine says nearly 15 percent of Americans over 70 have dementia, and the yearly cost of caring for them can run $70,000. So what does that mean for families?

Barbara Geake is a lifelong New Englander, fiercely self-reliant. But this January, at age 81, she was diagnosed with Alzheimer's.

"I mean, I've been pretty independent," she said, "and now it seems like everybody has to do something for me."

Dementia costs U.S. up to $215 billion per year, study finds
Dementia "camp" helps give caregivers night off
One in three seniors die with dementia, Alzheimer's

So what's that like now for her? "Frustrating as the devil," she said.

For Michael, that means a 265-mile commute from southern Connecticut to his mother's home in northern Vermont.

Michael just installed six cameras so he can monitor his mother from afar. "If we call and she doesn't answer, we can basically scout around the house, find out where she is," he said.

He and his wife spend four days a week with Barbara, prepare food and help manage her medication.

"That way, we know on a given day has she taken the medicine for that day," said Michael.

"And they check," added Barbara.

The Alzheimer's Association estimates there are some 15 million caregivers in the U.S. -- 2.3 million of them are like Michael -- providing long-distance care for a relative or friend. On average they spend nearly $10,000 out of pocket each year, almost twice the amount as those who live near the patient.

Michael, an insurance salesman, said working less to help his mother has cost him almost half his income. As for what's that like between wanting to keep her independence and wanting to keep her safe, he said: "Oh, I'm feel like I'm on the verge of a nervous breakdown most of the time."

Barbara Geake is still able to handle most everyday tasks. But one recent memory lapse was especially hard for both mother and son: She always made a birhtday cake for Michael. But this year she said: "I forgot. I had a feeling I'd gone over that hill and down the other side. It's very depressing."

She does realize that fairly soon, she's going to have to move in with one of her children. When I asked her about that, she just smiled and said, "Well, they'll just have to put up with me."

Afghan women fear for their safety under Taliban rule