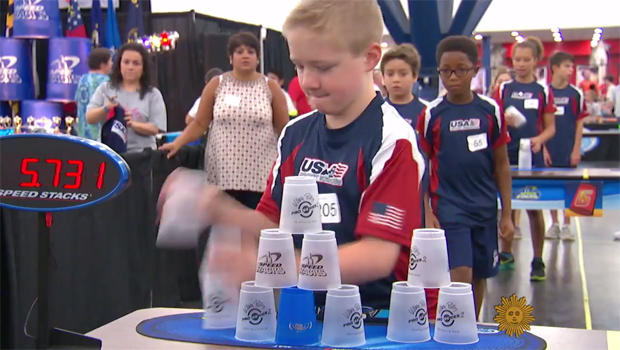 Action is FAST AND FURIOUS at the athletic competition Luke Burbank takes us to this morning -- and no, we're not talking about the Super Bowl (Originally broadcast on February 5, 2017):

P.J. Ball is a gifted athlete. He's just 12 years old, but his talent hasn't gone unnoticed. He's been interviewed on national TV, his Instagram page is a hit, and with his medal wins, he's got more hardware to dangle around his neck than Mr. T.

But you won't find P.J. on the football field, or the baseball diamond. You'll find him standing behind a table and a stack of cups -- a stack he can put up and take down with alarming speed.

Welcome to the world of Sport Stacking. The goal is to stack the cups in specific formations and take them down as fast as humanly possible without knocking them over.

He started using bathroom spit cups ("They were horrible!"), before asking his parents for some official cups for Christmas.

The sport started at a California Boys & Girls Club back in 1981, where kids stacked Dixie Cups for fun. Within a decade, the sport had formalized, spreading to schools in 37 states. It was even featured on "The Tonight Show" in 1990.

Today, more than eight million kids participate in sport stacking all around the country. Phys Ed teachers love it because it's a rare sport that anyone can play, even those who may not be as athletically inclined as others.

For P.J. and his family, the sport has been life-changing. In fact, sport stacking has become a sort of family business.

P.J.'s parents sold their house in Florida, and now travel the country teaching the sport, while P.J. competes in various tournaments. "We have the R.V. We go into schools. We go into churches. We go into community groups," said Natasha.

"I think it was, like, 2012 nationals, and they all the sudden started giving awards to girls. And I started, like, getting awards," Green said. "So I was like, 'Wow, I can do this!'"

And she has. She got so good at stacking that she quit playing soccer, baseball and football to pursue this sport full time.

And it's not just about the trophies. "Studies have shown that it helps with math, reading, science," Green said. "So that has helped me a lot, like, be able to get better grades, because I can focus and do well and understand a little bit more."

"You want to be a sign language interpreter?" Burbank asked.

"Yeah. I really like that idea! Because I get to use my hands still, and move my fingers."

Like most sport stackers, Jordan and P.J. keep track of their competitors and teammates via YouTube and social media, but it's when they all converge in one place that the cups really start to fly.

The Junior Olympics in Houston (yes, this is a Junior Olympic sport) was a chance for sport stackers of every age and size from around the world to see just how fast they could go, and it gave them a chance to prove to any doubters out there that stacking isn't just a quirky hobby, but a REAL sport -- one that belongs in the same sentence as soccer or swimming.

"I've heard of some people that they've gotten bullied for it just because they'll say, like, 'Oh, that's not a sport,' or 'That's really dumb,'" Green said. "But my friends have been super supportive. They all are like, 'Wow, that's so cool, when's your next tournament?' or "How'd you do?'"

In Houston, both P.J. and Jordan won more medals to add to their collections, with Jordan setting a massive personal best along the way.

In just a couple of years, Jordan will be off to college, but that doesn't mean an end to her stacking interests.

"How long do you think you're gonna do this?" Burbank asked.

"Probably forever," she replied. "There's a saying in the community, 'Once a stacker, always a stacker.'"

Meanwhile, P.J. sees a possible expiration date on his stacking career; he thinks he'll be doing it until he's about 16 or 17. "And then I'll probably be into college. And I'll have some other stuff, like a job or maybe a wife or something."

Surviving locked-in syndrome: How one man confounded expectations of death
Thanks for reading CBS NEWS.
Create your free account or log in
for more features.
View CBS News In
CBS News App Open
Chrome Safari Continue
Be the first to know
Get browser notifications for breaking news, live events, and exclusive reporting.