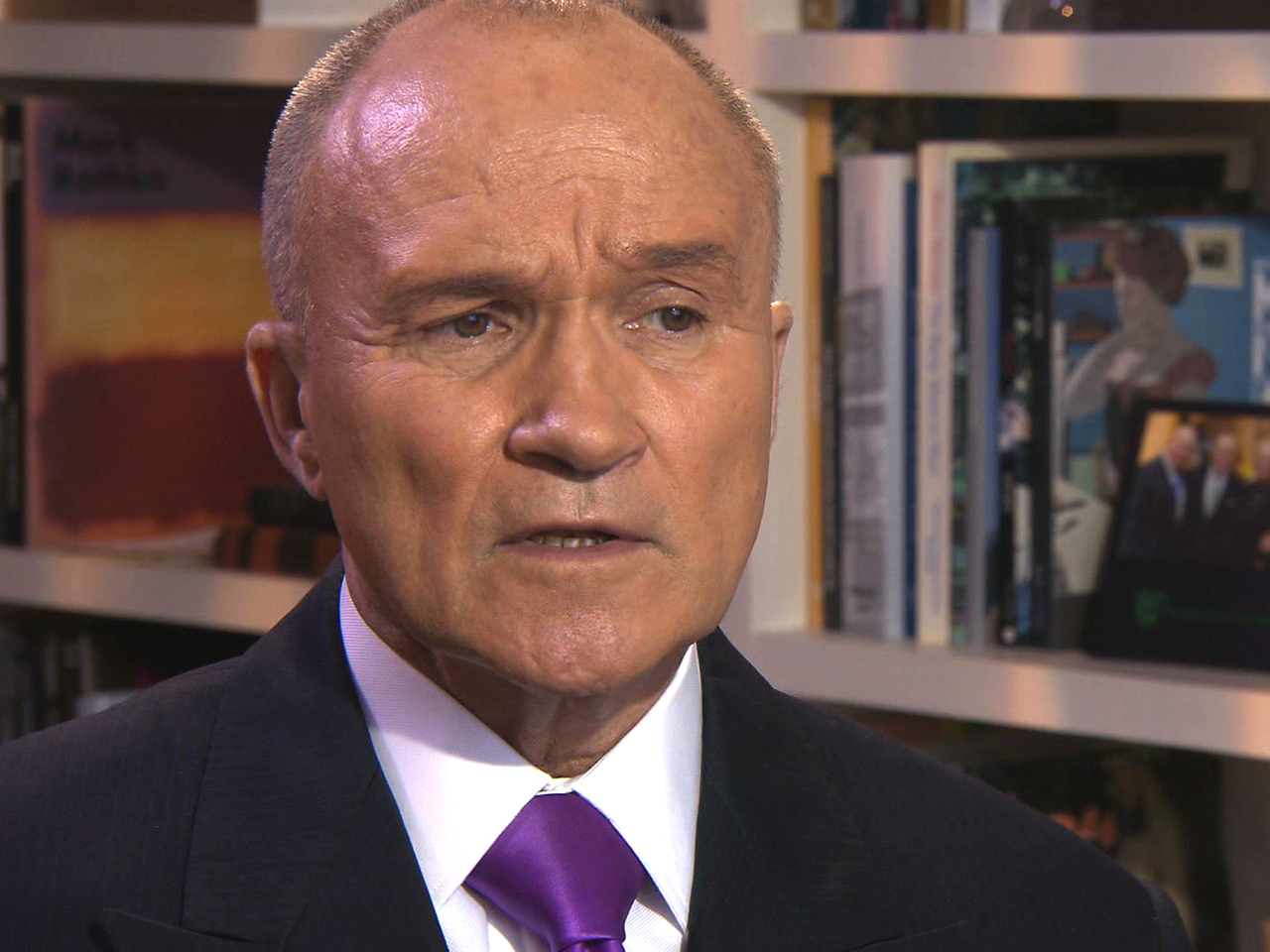 Everything seems big in New York City, except these days the crime rate. The outgoing head of the New York Police Department, Ray Kelly, thinks his policies have been one reason why.  He sat down with Erin Moriarty of "48 Hours," for some Questions & Answers:

On New Year's Eve, as they begin their careers, Kelly will be ending his -- stepping down at midnight as the longest-serving commissioner in the history of the NYPD.

He's leaves as a career cop whose aggressive tactics have both divided and transformed the city.

"I remember a year when I was living here when there were more than 2,200 murders," said Moriarty. "What is it now?"

"Well, it'll probably come in at about 330 murders [this year]," replied Kelly.

What was once one of the nation's most dangerous big cities is no longer. Homicides, robberies, rapes and larcenies are a fraction of what they were.

"There are still pockets in the city where there are problems, no question about it," Kelly said. "But you know, just a few years ago, people were afraid to come out of their house, afraid to go into midtown Manhattan.

In fact, driving crime out, Kelly says, is drawing new residents in.

"So we can blame you for the higher rents in the city?" Moriarty asked.

"Yeah, right. Exactly. We're sorry for that," he laughed.

Richard Aborn, president of the non-partisan Citizens Crime Commission of New York City, said it is remarkable how low crime has been driven down. "And they have done it at a time when the economy couldn't be worse," he said.

Kelly became a cop more than 46 years ago, when he himself graduated at the top of his class at the Police Academy. After a training session at a firing range, he says, he was handed a gun and put right out on the street.

"We wouldn't dare do anything like that these days," he said.

Kelly has had the department's top job twice: While most commissioners, including Teddy Roosevelt (who ran the NYPD in the late 1800s), held the position for less than four years. Kelly has been here for a total of 14.

He runs the nation's largest urban police force with a $4.6 billion budget, and faces a challenge many of his predecessors never imagined: international terrorism.

"The counterterrorism issue is a game-changer," said Aborn. "It is something that no one ever, ever thought needed to be the responsibility of an urban police chief. Now it is a clear responsibility."

In 2001, when terrorists brought down the World Trade Center, Kelly had left the NYPD and was working in the private sector. When Mayor Bloomberg offered him the commissioner's job, he jumped at the chance.

"I wanted to get back in the game," Kelly said. "You know, after the events of 9/11, you felt a little bit helpless, not being in government."

Kelly's response was to set up his own counterterrorism unit, the first of its kind -- sometimes described as a mini-CIA. Officers monitor the 4,000 cameras stationed throughout the city. Computers track calls that come in, and crime as it happens.

"You'll go to other cities and you'll see rooms that look like this, but [don't] do what we do here," Kelly said.

On top of that, NYPD officers are stationed in nine different countries outside the U.S.. They answer to Kelly -- not federal agencies. He says his team has averted as many as 16 planned attacks.

Moriarty asked, "Didn't you have to step on some toes, though, taking over counterterrorism here, from federal agents who had always been responsible for it?"

Yes, he replied: "Everybody was not happy. But you know, that's life. You have to be able to break some eggs, and do the thing that you believe is right."

The former Marine with both a law degree and a Masters in public administration has come to symbolize the 21st century crimefighter.

But some of his policies have also sparked a national debate.

Muslim leaders called for a federal investigation after undercover cops were sent inside mosques to conduct surveillance.

And Kelly has become the national face of a police practice commonly known as "stop and frisk," which critics say is often abused in minority neighborhoods.

In October, the commissioner, who had come to Brown University in Rhode Island to discuss policing policies, was taunted by protesters, and finally heckled off the stage.

But Kelly refuses to acknowledge any abuses by his department.

"I have said all along that this is a false narrative, that we have very good relations with the communities that we serve," he said. "['Stop and frisk'] is a tool in the tool box that I think has to be kept available for officers to use."

"You're not apologetic about it at all?" asked Moriarty.

"No. no, I'm not apologetic at all when we're saving lives," Kelly replied.

And Kelly does have supporters:

Richard Aborn of the Citizens Crime Commission of New York City said, "Some of the criticism about excessive 'stop and frisk' has been fair. But you have to put the 'stop-and-frisk' issue in a much broader context.

"If you look at his whole record, it's a very strong record."

Healthy and fit at 72 years old, Kelly now plans to join the speakers circuit. But for the next 36 hours, he still has a job to do:

"This is a total immersion job," he said. "You either do it, or you don't do it. You have to sort of keep your foot on the pedal until the end."