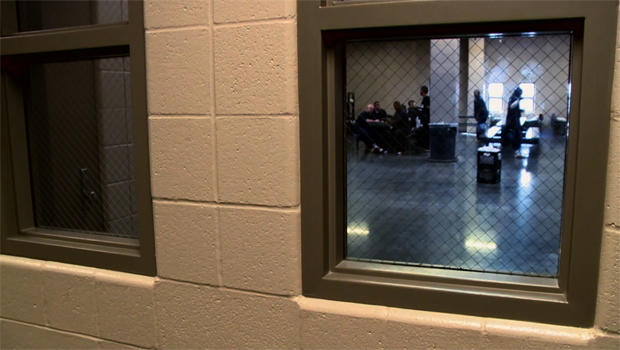 The notion that society is best served by taking people who break the law and locking them up for a long time has always had a powerful constituency in this country. That's why, on a per-capita basis, the United States has more people behind bars – 2.3 million – than any other country in the world.

And a lot of the sentences are insanely long: One convict at San Quentin Prison in California was sentenced to 1,002 years and 19 life terms for armed bank robbery. That's our starting point.

There's no such thing as a good time to be an inmate in the U.S. prison system, or for that matter to be awaiting trial in a county jail.  It may also be that there's never been a worse time.

Rikers Island, in New York City's East River, currently holds more than 4,000 prisoners.  It is a toxic breeding ground for COVID-19.  Throughout all of the city's jails and prisons, the numbers of inmates and staff testing positive has now topped one thousand.  Keep in mind that Rikers, by far the largest of them all, is a jail, not a prison:

"What I know from being incarcerated is that people in American prisons and jails have very little prospect at avoiding infection," said Piper Kerman, who spent more than a year behind bars (her memoir was adapted into the hit series "Orange Is the New Black"). She is a passionate advocate of early release.

"Jail facilities typically hold people who have been arrested and have been charged with a crime, but are presumed innocent," Kerman said. "But the majority of people are eligible for bail and can return to the community, but they are too poor to pay their bail.

"Nobody should sit in jail just because they're poor, and especially when there's a pandemic going on," she said.

There is an added touch of desperation to calls coming out of jails and prisons around the country these days. "It's looking grim.  It's just a matter of time before we all get it," said one inmate at Marion Correctional Institute in Ohio. "We just in here. Look, guys is coughing, there's no way to escape it.  If this is the last time you see me, know that I love you. Know what I'm saying …  not to sound like that, but it's real."

Confinement and social distancing are mostly incompatible: "Inside of a cell, you have to basically figure out, like, how are you gonna adjust, because a few feet down from you is another person," said Earlonne Woods, who in 2018 showed "Sunday Morning" Special Contributor Ted Koppel around his cell at San Quentin, outside San Francisco.

"You don't have a helluva lot of room in here, do you?" Koppel said.

Woods, now an ex-con, told Koppel, "That small space – as you know, you was in there – it's about the size of an average person's bathroom.  So that's what that confinement is."

Adnan Khan is also happy to describe himself these days as an ex-con. "Earlonne and I were in San Quentin together. The floor that we lived on, we shared it with 100 people. And that floor was three feet wide.  So, it is physically impossible to do six-foot distancing, in a three-foot-wide tier."

So, what happens when inmates get sick? "When viruses hit, the culture of prisons, at least in my experience, has been punitive," Khan said. "Meaning that when someone gets sick, they get punished by being sent to solitary confinement."

That, at least, was the case at San Quentin. When Earlonne Woods was an inmate there he hosted, and still hosts, a podcast called Ear Hustle.  He did an episode on solitary:

One controversial option: The early release of elderly inmates and those convicted of non-violent crimes. On April 3, Connecticut Governor Ned Lamont said, "Anybody who doesn't have to be in prison is not being sent to prison.  Anybody who is non-violent or ready to be released is out."

In Florida last week, the troubling exception that will only solidify existing resistance to early release: After scores of prisoners were released to alleviate the spread of the virus, one man freed from jail allegedly murdered someone the next day.

In March, Texas Governor Greg Abbott issued an executive order prohibiting the release of "dangerous felons" from prisons and jails in Texas.

We may, in ordinary times, have the luxury of ignoring what happens behind prison walls.  But, said Piper Kerman, not now: "Prisons and jails do not have ICUs," she said. "They don't have any of the medical facilities to deal with very sick people.  So, every single day on a normal day, on a good day, thousands of prisoners are brought out of prison to local hospitals."

Overall, the number of inmates and staff testing positive in New York City's prisons and jails is now over a thousand.  One might reasonably assume that the majority of that number are inmates.  They're not.  Of those testing positive for COVID-19, Department of Corrections staff outnumber inmates almost exactly two to one.

"It's impossible that staff will not become infected, and that their own families and their own communities are not going to experience the spread of coronavirus outside of prisons and jails," Kerman said. "Because an outbreak behind bars is going to spread to the outside community."

A footnote:  The Florida Department of Corrections has lowered the minimum age to be a corrections officer, and just last week announced $1,000 bonuses for new recruits.

Elmo talks about getting COVID vaccine; Ted Cruz has a problem with that