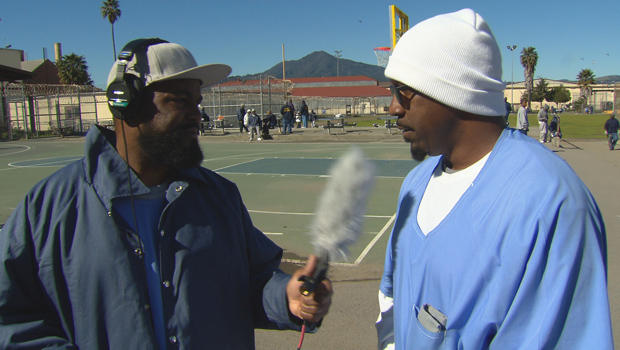 "The Q" is shorthand for San Quentin, the notorious prison located just across the bay from San Francisco. Despite its reputation, some things are changing within its walls, as we hear from "Sunday Morning" senior contributor Ted Koppel:

It's difficult to imagine a more forbidding place with a lovelier view than San Quentin. Alcatraz, perhaps; but that went from prison to tourist attraction 45 years ago.

The outside world got an inkling of conditions inside when Johnny Cash performed this song in, and about, San Quentin, for an audience of raucously appreciative inmates almost 50 years ago:

San Quentin, may you rot and burn in hell.
May your walls fall and may I live to tell.
May all the world forget you ever stood.
And may all the world regret you did no good.

That was 1969. But even 12 years later, when Lonnie Morris got here, it was in every way a volatile, dangerous place: "Which meant you could be stabbed, and if it was against the police, you could be shot, or you're in a conflict with another incarcerated person, you could be shot by the police in their effort to break up a violent conflict."

The inmate population continues to have its share of violent criminals, and – for the most part – the men still self-segregate along ethnic and racial lines. "Prison politics" they call it – an unwritten set of rules that still carry weight.

Koppel asked Earlonne Woods (who has spent 20 of his 46 years in prison),"If I started going through the cell blocks here, how many times am I going to see a white guy in the same cell as a black guy?"

Don't get the wrong idea; San Quentin has changed – that's what this story is all about. It used to be a level four maximum security prison, now it's level two, with a serious emphasis on rehabilitation.

"One of the reasons why I came here was 'cause there's a lot of [educational] programs," said a "lifer" named Johnny.

For instance, there a class in computer programming; there's the prison newspaper, the San Quentin News, with seven civilian advisers – professional journalists – but which is staffed by inmates. And there are actual college classes.

Johnny applied to come to San Quentin. "So, it's kind of like going to college?" asked Koppel.

Now, that's bound to raise a few hackles: This image of several thousand hardened criminals – robbers, rapists, killers – broadening their cultural horizons at some taxpayer-supported campus by the Bay. Take another look, though; San Quentin remains very much a place of punishment – a correctional institution.

"You can come here and become a better person, a better individual, by coming to prison," said inmate Andre Yancy.

No, no, no, no! Come, let's away to prison:
We two alone will sing like birds i' the cage:
When thou dost ask me blessing, I'll kneel down,
And ask of thee forgiveness: so we'll live,
And pray, and sing, and tell old tales, and laugh. – "King Lear"

Members of the Marin Shakespeare Company – including women – are civilian volunteers helping inmates mount a production of "King Lear."

"I've already decided I'm going to kill her," she laughed.

The themes of trust and betrayal woven throughout "King Lear" have a unique resonance for this group of actors. One inmate explained, "I give you my full authentic self. You give me this character the whole time. So, like, that's a big betrayal."

"All the more reason to really take our time to really get to know someone, not just our image of them," said the director.

"We have nothing but time here!"

Nothing but time. Thirty-five years ago, CBS News correspondent Gary Shepard focused on the problem of overcrowding at San Quentin: "The prison system's answer has been to put two inmates into a tiny cell – six feet wide by eight feet long, designed to barely accommodate a single prisoner."

"You don't have a helluva lot of room in here, do you?" Koppel asked Woods.

"I don't. You know, it's like one person can move at a time. Like, we have to turn sideways!"

Woods is of particular interest because of his day job: He and Koppel are in a similar line of work.

"I'm Earlonne Woods, a prisoner at San Quentin State Prison in California. I'm serving a 31 year-to-life sentence for being a getaway driver of an attempted second-degree robbery. You're now tuned in to San Quentin's Ear Hustle from PRX's Radiotopia."

Ear Hustle is a podcast that tells the stories of inmates and of life inside prison. "Ear Hustle basically means eavesdropping in on conversations," Woods said.

Did he know what a podcast was before he started doing one? "No, I didn't!" he laughed.

Woods co-hosts and also co-produces Ear Hustle with a civilian, Nigel Poor: "I came in out of curiosity. I wanted to know what life was like inside prison. And I had a lot of assumptions that most people have, that the guys in here were gonna be scary, that it was gonna be dangerous. And through spending time here, that was really changed."

POOR: "That's what we're talking about on this episode – hope and hopelessness in the face of these really long sentences."

MAN: "I won't go up for parole until Jesus comes back first."

Ear Hustle focused one podcast on solitary confinement – what prison authorities call Security Housing Units, or the "SHU." Also known as the Hole, the Box, the Dungeon.

Before he was transferred to San Quentin from Pelican Bay, Richard Johnson spent 19 years in the SHU: "Not that I actually did anything, but they were saying I was a gang member or something," Johnson said.

Koppel asked, "Were you?"

"At the time! Solitary is used in some countries to drive people crazy, and then that's the whole point of it."

"Right. That was their intent. But I'm resisting, you know? Still resisting, because you don't fully get over that."

When asked what he cannot talk about on his podcast, Woods said, "Haven't got there yet. So, I don't know what we can't talk about yet."

San Quentin's Public Affairs Officer, Lt. Sam Robinson, is the ultimate decider. He could block a subject. Although he told Koppel, "There hasn't been that instance yet. There have been some that weighed mightily on me, [like] the podcast 'The Boom Boom Room.'"

And what is the "Boom Boom Room"? "A name that's I've given to a place where, I guess, people conjugate, where people come together, and do what people do!" he laughed.

PRISONER: "I'm standing against the wall. She just like leaned against me with her head on my chest. And we talked without talking, you know? It was like we was a regular couple. We wasn't in prison. We was just us. Yeah."

"I let it go through," said Lt. Robinson. "Because it was true and authentic and it represented conjugal visits are even much more than what we in society believe is just this opportunity to do what adult people do. [It's] being a family."

Ear Hustle is doing something unique in the history of San Quentin: It is conveying the stories and voices of society's outcasts literally around the world. It is, Nigel Poor said, "shockingly popular," with about eight million downloads to date.

For each program? "No, our first season!" laughed Woods. "That would be cool!"

The most vulnerable among these prisoners have often been punished well beyond the sentence that any court handed down, and they are desperate to have somebody – anybody – listen.

Convicted of an armed robbery, Curtis Roberts is doing 50 years to life:

ROBERTS: "I was raped in prison and it took something out of me. But then when the rape happened, it was like, ain't nobody coming to rescue you, Curtis. Ain't no way you're getting out of this; and this is what you have to live with for the rest of your life."

Roberts was one of the subjects of an Ear Hustle podcast last season. He told Koppel, "There was a little girl that came in here to the prison and – my definition, 'a little girl,' high school girl. She heard the podcast and she said, 'Curtis, if you don't mind, I'd like to share my secret with you.' I said, 'What's your secret?' She says, 'Curtis, I was raped like you were.' And I was like, oh, my heart just broke, you know?

"She promised me that was gonna go home and tell her mom and dad, and it was no longer gonna be her secret. And so to me, that, finally, Curtis Roberts has done something good."

Someone in the California Governor's Office clearly agrees, because Roberts is being considered for clemency.

Freedom can be a scary prospect after decades in prison. Earlonne Woods and Nigel Poor were out on the yard a few weeks back, interviewing inmates on just that:

INMATE: "I've been in this little bubble. Prison is its own world. Being in here I can tell you that this is a whole different world, whole different society than it is out there. It is so big and so vast in society right now that I feel a little overwhelmed, I feel like I'm going to be a little bit overwhelmed. But I welcome it."

"Yeah, but that don't change. That don't stop you from changing your ways and changing your life just because I have 1,000 years-to-life," Woods replied. "You never know what may happen tomorrow."

And, thanks to a prison podcast, that's a message being heard regularly now beyond the razor wire and these old walls.

Correspondent Bill Geist ventures to Clarksville, Ind., where members of the Vacuum Cleaner Collectors' Club have gathered for their annual convention

A fix for McDonald's soft-serve machines?