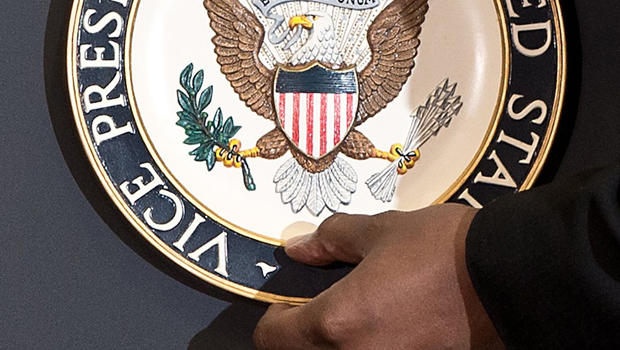 In the wake of President Trump's COVID-19 diagnosis, "60 Minutes" correspondent John Dickerson reflects on how the power and profiles of vice presidents have grown in recent decades:

Vice President Mike Pence was at the same event where the president might have been infected, but so far it appears he was out of the loop. Still, Democratic nominee Kamala Harris has asked for the extra distance just to be safe.

What it means to be safe and what accommodations are necessary during the pandemic will be a key debate topic. The matter of national importance on which the campaigns disagree has also distinguished the way they carry out their campaigns.

The debate over these issues is no longer abstract, and makes the inevitable abstract questions about whether the vice presidential candidates can step into the job if required a little too on-the-nose.

That used to be the most important question asked at vice presidential debates. Otherwise, they were characterized by peppery exchanges, because the role used to require playing the attack dog.

The vice presidency once had a low reputation. John Adams called it "the most insignificant office that ever the invention of Man contrived or his imagination conceived." FDR's sidekick, John Nance Garner, said the job was "not worth a bucket of warm …" Well, let's just say it wasn't fresh milk.

Admiral James Stockdale, Ross Perot's running mate, famously felt this way during a debate: "Who am I? Why am I here?"

Many vice presidents have felt that way in office, too.

But the modern vice presidency is a more muscular job, and the role a president picks for his number two tells us something important about how the chief executive builds their team and deploys talent. Dick Cheney shaped energy policy and the war on terrorism. Biden negotiated with Congress, managed the economic recovery, and played chief skeptic on Afghanistan. Pence leads the task force combatting coronavirus.