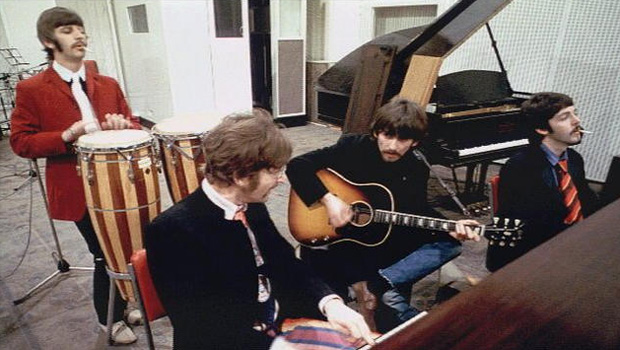 If you had not heard about it before, I'll bet you've heard a lot about it lately. But it must be said -- in recent years a lot of the rules The Beatles changed seem to have changed back.

Let me count the ways.

No one did more than The Beatles to establish the album as an art form. After "Revolver" and "Sgt. Pepper," the single, the 45, seemed like kid stuff. We wanted to put on an LP, lie down on the rug and get lost in a musical journey, preferably while wearing headphones.

There are still great albums being made, but good luck finding them. It's not like you can wander into your local record store and ask the hippie behind the counter what's new and hip. Now, it's an iTunes world, and singles are back to being the main currency of popular music.

That's if you can get people to pay for music at all.

Tons of music is pirated on the Internet. Revenue from record sales is a fraction of what it once was.

Which has led musicians to look for other ways to support themselves. The Beatles refused to allow their music to be used in TV commercials; musicians in 2014 don't have that luxury. Now they have to sell their songs for commercials, and worse.

Can you imagine The Beatles going on Kickstarter to ask fans to chip in to help them make "Magical Mystery Tour"? Can you imagine George Harrison tweeting about his trip to India, or John Lennon blogging about primal scream therapy?

Actually, Lennon blogging would have probably been very funny, and caused a lot of trouble!

Among the many changes The Beatles brought to popular music was the idea that performers should write their own songs. Irving Berlin did not sing. Frank Sinatra did not compose. But The Beatles wrote the songs, sang the songs, and played the instruments. They set a high bar, and pretty soon everybody was trying to get over it.

Singers like Mick Jagger and Rod Stewart realized they had to start composing or be left behind. They turned out to have a knack for it. Professional songwriters like Carole King and Kris Kristofferson decided to begin performing their songs themselves.

When the young Bobby Womack complained to his mentor Sam Cooke that some of these new singer-songwriters were not good vocalists, Cooke told him, "From now on it's not going to be about how well you sing; it's going to be about making people believe what you're singing is true."

The age of the singer-songwriter gave us Bob Dylan, Smokey Robinson, Stevie Wonder, Joni Mitchell, Neil Young and a thousand others. From Taylor Swift to CeeLo Green there are still popular singers who write their own songs, but nowadays many of the big pop hits, and most of the top country songs, are written by outside songwriters and production teams.

Sometimes the artist gets his name on the song as a co-writer, but that's like Elvis Presley getting his name on "Don't Be Cruel." The real writer gives the star a piece of the credit and the songwriting revenue to get him to cut the song. That used to happen a lot before The Beatles. It happens a lot these days, too.

Looking back, it now feels less like The Beatles started a permanent revolution and more like they ruled over a Golden Age. For about 20 years after The Beatles hit, popular music was remade in their image. Music reflected (and sometimes inspired) social progress. Creativity and innovation were valued over formula. Everything was not for sale, but artists were paid for their work.

It was too much to expect such an era to last.

We are lucky it happened at all.