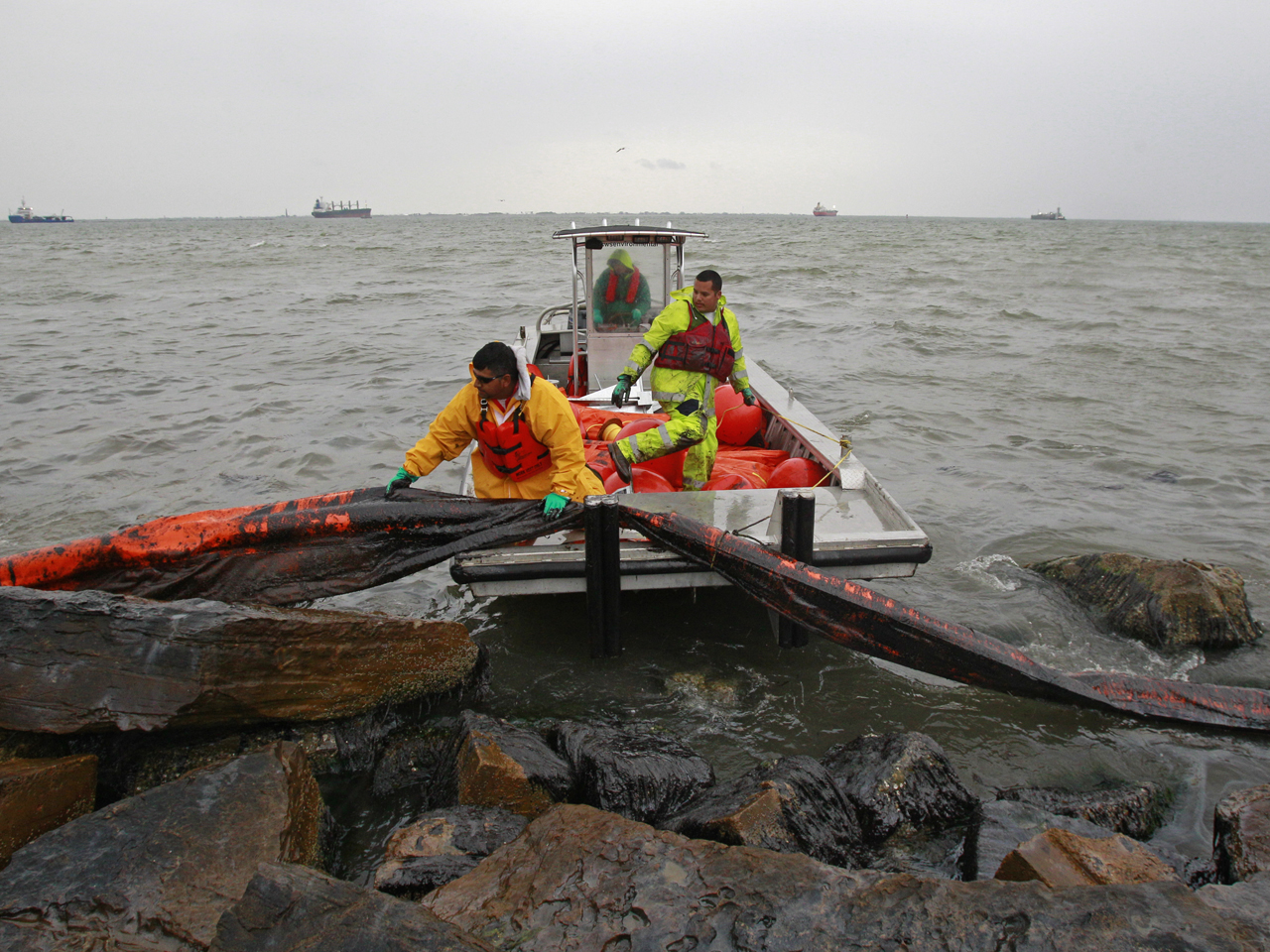 GALVESTON, Texas -- The Coast Guard is trying to resume barge traffic in and out of one of the busiest U.S. seaports as quickly as possible after an oil spill, but more tests are needed to confirm the water and the vessels traveling through the Houston Ship Channel were free of oil, officials said Monday.

The oil is particularly difficulty to clean up, said Rich Arnhart of the state's response team.

"It's just a thicker oil, it stays together and doesn't evaporate as fast as some of the lighter crude oils or lighter fuel oils," he told CBS News.

Elsewhere, crews lined up miles of oil booms to keep oil away from the shoreline and bird habitats, two days after a collision in the Houston Ship Channel dumped as many as 170,000 gallons of oil from a barge into the water along the Gulf Coast.

Officials believe most of the oil that spilled Saturday is drifting out of the Houston Ship Channel into the Gulf of Mexico, which should limit the impact on bird habitats around Galveston Bay as well as beaches and fisheries important to tourists.

"This spill - I think if we keep our fingers crossed - is not going to have the negative impact that it could have had," said Jerry Patterson, commissioner of the Texas General Land Office, the lead state agency on the response to the spill.

The best-case scenario is for most of the slick to remain in the Gulf for several days or longer and congeal into small tar balls that wash up further south on the Texas coast, where they could be picked up and removed, Patterson said. Crews from the General Land Office are monitoring water currents and the movement of the oil, he said.

Some black, tar-like globs, along with a dark line of a sticky, oily substance, were seen along the shoreline of the Texas City dike, a 5-mile jetty that juts into Galveston Bay across from a tip of Galveston Island.

Jim Guidry, executive vice president of Houston-based Kirby Inland Marine Corp., which owned the barge, has said the company - the nation's largest operator of inland barges - would pay for the cleanup.

Refineries in Texas City appeared to have enough crude oil on hand to continue operating until the ship channel can re-open, Patterson said.

Environmental groups said the spill occurred at an especially sensitive time and place. The channel in Texas City, about 45 miles southeast of Houston, has shorebird habitat on both sides, and tens of thousands of wintering birds are still in the area.

The spill happened at the height of roosting season close to a wildlife refuge. At least 50 birds of six species have needed treatment due to the oil, said Richard Gibbons, conservation director of the Houston Audubon Society. The species include sanderling, ruddy turnstone and the American white pelican, Gibbons said.

The channel, part of the Port of Houston, typically handles as many as 80 large ships, as well as about 300 to 400 tugboats and barges.

The barge was carrying about 900,000 gallons when it collided with a ship. The resulting accident falls far short of major American oil spills such as the 1989 Exxon Valdez disaster in Alaska, which dumped 11 million gallons of oil into the Prince William Sound, or the Deepwater Horizon spill, in which more than 100 million gallons of oil spilled into the Gulf of Mexico four years ago.