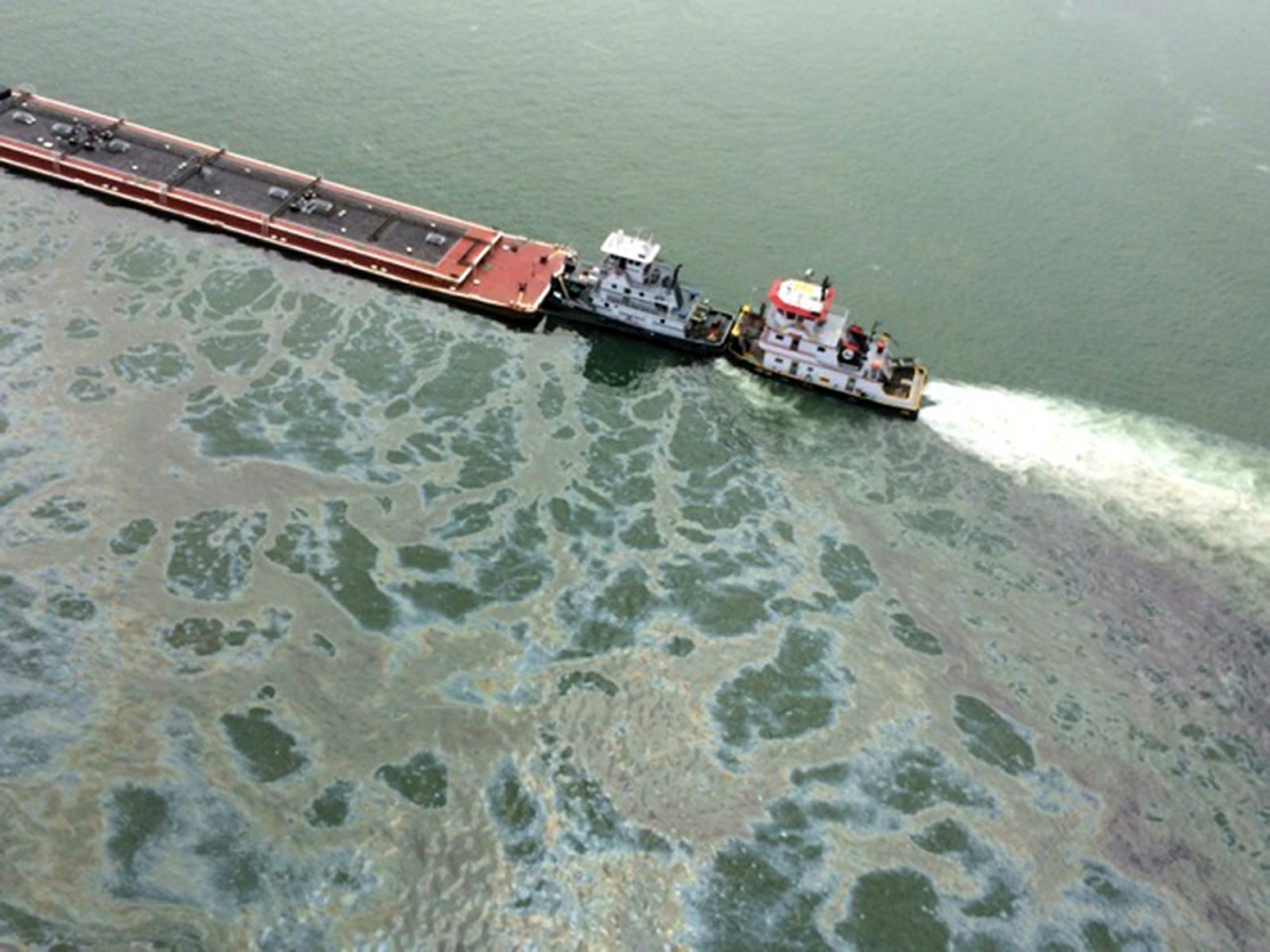 TEXAS CITY, Texas - A barge that once carried some 900,000 gallons of heavy tar-like oil was cleared Sunday of its remaining contents, a day after the vessel collided with a ship in the busy Houston Ship Channel and leaked as much as about a fifth of its cargo into one of the world's busiest waterways for moving petrochemicals.

The channel was shut for a second day with as many as 60 vessels backed up both trying to get in and get out.

Coast Guard officials said that up to 168,000 gallons were dumped and that oil from the ruptured barge had been detected 12 miles offshore in the Gulf of Mexico as of Sunday afternoon.

"This is a significant spill," Capt. Brian Penoyer, commander of the Coast Guard at Houston-Galveston, said.

But he said the emptying of the barge Sunday, a process known as lightering as contents are transferred to other vessels, was equally significant.

"The remaining risk of pollution, we've removed that," he said.

More than 380 people - "and we've ordered more," he said - plus a fleet of oil-retrieving skimmers and other vessels deploying containment booms around environmentally sensitive areas worked to mitigate the damage.

Jim Ritterbusch, president of energy consultancy Jim Ritterbusch and Associates in Chicago, said if the bottleneck of vessels in the Gulf eased in a day or so, there likely wouldn't be much impact on fuel prices. A more prolonged backup could push up prices briefly, he suggested.

There was no timetable for a total reopening of the channel, which typically handles as many as 80 vessels daily.

Crews were skimming oil from the water and deployed some 60,000 feet of containment booms to protect environmentally sensitive areas, the Coast Guard said. The area is home to popular bird habitats, especially during the approaching migratory shorebird season.

Officials said they had scattered reports of wildlife damage but no specifics. Some black tar-like globs, along with a dark line of a sticky, oily substance, could be detected along the shoreline of the Texas City dike, a 5-mile-long jetty that juts into Galveston Bay across from a tip of Galveston Island.

"That is the consistency of what the cargo looks like," Jim Guidry, executive vice president of Houston-based Kirby Inland Marine Corp., the nation's largest inland barge company and owner of the barge, said when the substance was described to him at a news conference.

"We're very concerned. We're focused on cleaning up," he said.

He said the company was taking responsibility for the costs.

The barge has been moved to a shipyard and is no longer at the scene of the spill, according to a statement Sunday evening from Texas Gov. Rick Perry's office.

Penoyer said at least one cruise ship, initially socked in by fog Saturday, was being allowed to end its trip and return to Galveston. He said others would be handled on a case-by-case basis. Its path into Galveston would take it through a safety zone defining the oil cleanup area.

The Coast Guard and National Transportation Safety Board were investigating what happened.

The contents of the torn tank, equal to about 4,000 barrels, were lost or displaced into other vacant areas of the barge. Penoyer said currents, tides and wind were scattering the spill.

"Containment was never a possibility in this case," he said.

The spill also closed was the Texas City dike, a popular fishing spot that goes out into the Gulf for a few miles.

The spill site is 700 yards offshore from the Texas City dike. A crane and several small boats could be seen at the cleanup site, and dozens of trucks were at a staging area along the beach.

The captain of the 585-foot ship, Summer Wind, reported the spill Saturday afternoon. Six crew members from the tow vessel, which was going from Texas City to Port Bolivar, Texas, were injured, the Coast Guard said.

Richard Gibbons, the conservation director of the Houston Audubon Society, said there is important shorebird habitat on both sides of the ship channel. One is the Bolivar Flats Shorebird Sanctuary just to the east, which Gibbons said attracts 50,000 to 70,000 shorebirds to shallow mud flats that are perfect foraging habitat.

"The timing really couldn't be much worse since we're approaching the peak shorebird migration season," Gibbons said. He added that tens of thousands of wintering birds remain in the area.