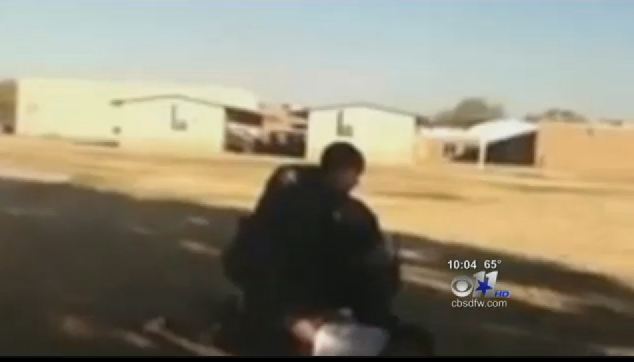 (CBS DFW) HURST, Texas - Police officials in Hurst, Texas used the word "embarrassing" to describe the videotaped, expletive-laced arrest that has the department investigating one of its own, CBS DFW reports.

Officer Disraeli Arnold was placed on administrative leave this week, after his videotaped arrest of 17-year-old Andrew Rodriguez went viral.

In the cell phone video recorded by Rodriguez's friend, Jordan Rojas, officer Arnold is shown running in as a backup and allegedly kneeing Rodriguez while he was subdued. The video also shows Arnold repeatedly cursing at the teen and asking him at least three times if he wanted to die.

CBS DFW reports that a May 2010 review of Arnold says: "Officer Arnold's enthusiasm may make him overzealous at times, which can cloud his judgment when it comes to policy, procedure and tactics. Sometimes he needs to step back and see the big picture to weigh the risks involved."

The disclosure of the review came as another resident filed a complaint about Arnold on Monday.

Arnold has received mostly positive reviews for his work for the department and is referred to by superiors as a "team player" interested in being promoted to supervisor, the station says.

His only discipline was for damage to a patrol vehicle, losing a cell phone of someone arrested, and problems with showing up on time for his shift, CBS DFW reports.

Hurst police are promising the community a thorough investigation into allegations that Arnold used excessive force in arresting Rodriguez.

"I don't think you can define the Hurst Police Department by just one act; but, you can define us by how we react to it," says Asst. Police Chief Steve Niecamp.