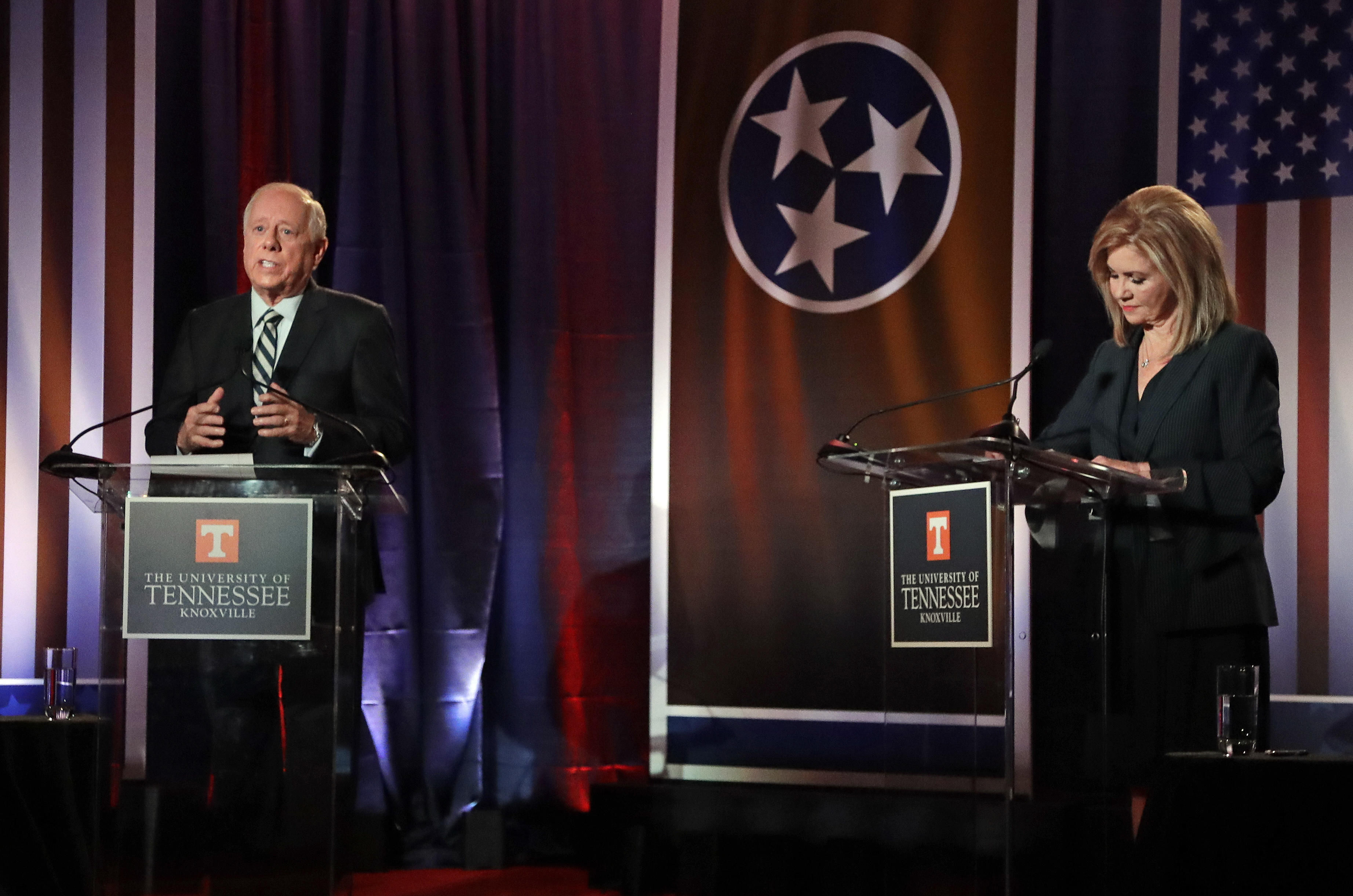 Republican U.S. Rep. Marsha Blackburn repeatedly attempted to tie her Democratic opponent Phil Bredesen to national Democrats in their second and final debate on Wednesday, while the former Tennessee governor deflected the attacks by once again promising to improve bipartisanship in Congress.

The two candidates exchanged barbs and and went on the attack during Wednesday's hour-long event — based at the University of Tennessee's Howard H. Baker Jr. Center for Public Policy — on topics ranging from health care, sexual misconduct allegations to gun control.

With election day less than a month away, the outcome of the competitive red-state race has attracted the national spotlight due to a 51-49 Republican Senate majority in the balance. The race has become so high-profile that even pop superstar Taylor Swift broke her political silence by going on Instagram to endorse Bredesen and encourage people to vote Nov. 6.

Despite Bredesen kicking off the debate pleading for civil discourse, Blackburn immediately jumped into attacking Bredesen for attending a fundraiser that headlined ex-New York City Mayor Michael Bloomberg. "That was possibly the shortest civil debate we've had in a long time," Bredesen responded.

Bredesen later said he didn't seek out Bloomberg's assistance but that Bloomberg called and offered his help. Blackburn said after the debate Bredesen and Bloomberg probably talked about "taking guns away from Tennesseans" or being a running mate with the gun control advocate in 2020.

"What I wanted to do was listen and to actually have hearings," Bredesen said. "I wish there had been more information. That could have changed my mind."

Blackburn in turn said she believed something happened to Ford, but said Tennessee voters wanted Kavanaugh to be confirmed. However, she spent the majority of her answer pivoting away from the judicial nomination process to criticize the handling of sexual misconduct allegations when Bredesen was governor.

"Phil said that he did not think men and women, when they were in the workplace together, that you just had these issues of sexual harassment," Blackburn said. "I think that is something that is an insult to women who were in the workplace and maybe he thinks I ought not be on this stage tonight."

Bredesen denied the congresswoman's characterization of his attitude during his time as governor, and instead countered he successfully worked to protect the privacy of victims as governor. Some sexual misconduct case records were shredded during Bredesen's administration, a policy that he stopped as governor.

For the majority of the debate, Blackburn used former presidential candidate Hillary Clinton as her example of Democrats Bredesen supports in almost all of her responses to questions. She routinely repeated that he gave $33,400 to Clinton's presidential bid and eventually hinted that Bredesen would move his desk to sit next to U.S. Sen. Bernie Sanders and Elizabeth Warren if elected.

The tactic was similar to how she argued during the first debate, but instead attempted to tie him Minority Leader Chuck Schumer — someone Bredesen said he would not vote for in the Senate.

Bredesen countered Congress needed less "party tribalism" and more independent thinkers willing to work with both political parties, even going as far as saying he would support Blackburn if she were elected.

On gun control, Bredesen called for stronger background checks while Blackburn called for more secure schools. Both supported a system that would flag those with mental illnesses seeking to buy guns while both reiterating their support of the Second Amendment.

The two were also asked to give their opinion of retiring Republican Sen. Bob Corker — the seat they're hoping to secure — which they both graded him as doing a wonderful job while in office. Blackburn said she hoped to keep the seat Republican, while Bredesen went on the defensive when asked by a moderator if he only praised Corker to prevent the senator from attacking the Democrat.

Neither candidate was asked about the state's growing opioid crisis — a central policy issue throughout the campaign and talking point for multiple television and digital ads. Instead, they fielded questions on expanding the military to include Trump's proposed "Space Force." Blackburn said she was in favor and Bredesen said he was open to the idea, but would need more information.