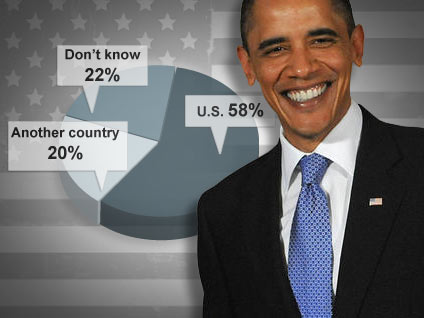 Although the Constitution requires American presidents to be natural born citizens, as many as 30 percent of Tea Partiers say they think President Obama was born in another country, according to a new CBS News/ New York Times poll. More Tea Partiers, however, at 41 percent, say he was born in the U.S.

The so-called "birther movement," questioning Mr. Obama's origins, began during his presidential campaign. It has steadily persisted through Mr. Obama's presidency, in spite of overwhelming evidence he was born in the United States -- including his 1961 birth announcement, printed in two Hawaii newspapers.

The myth persists among the larger American population, but to a lesser degree, according to the poll, conducted April 5 - 12. Thirty-two percent of Republicans think the president was born in another country.

Among Americans overall, 58 percent think Mr. Obama was born in this country, while 20 percent say he was born elsewhere. Significant percentages aren't sure or don't have an opinion.