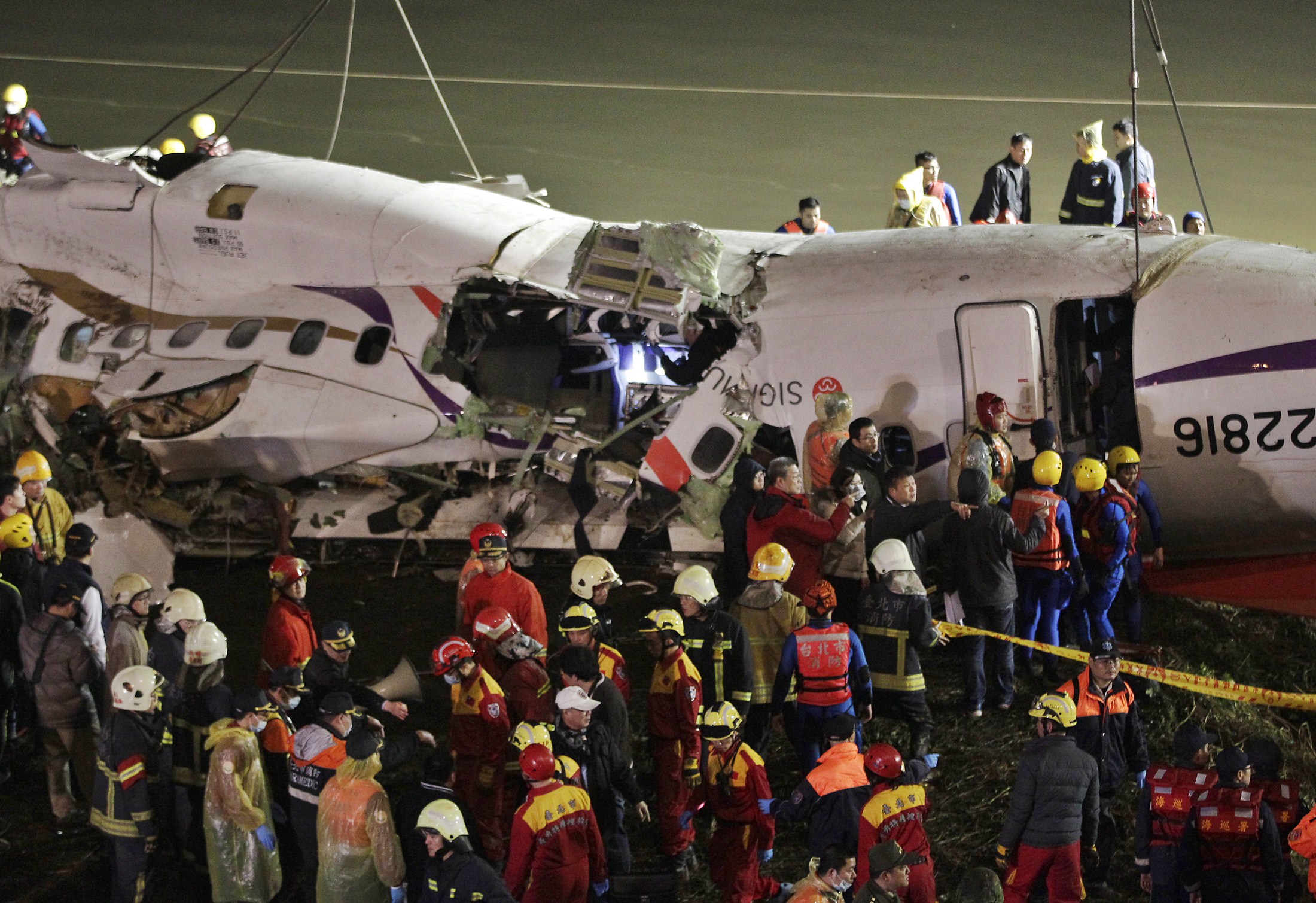 A Taiwanese plane crashed into a shallow river on Wednesday, the latest accident in a tragic 12 months for Asian air travel.

An ATR 72-600 plane operated by TransAsia Airways, a private Taiwanese airline, turned on its side in midair, clipped a bridge, hit a taxi and careened into a river Wednesday with 58 people on board. Rescuers pulled out people and bodies from the mostly sunken fuselage. More than two dozen people were killed and more than a dozen were missing.

The flight went down shortly after takeoff from Taipei's downtown Sungshan Airport and was heading to the outlying Taiwanese-controlled Kinmen Islands. Most of the passengers were from mainland China.

Taiwanese broadcasters repeatedly played a recording of the plane's final contact with the control tower in which the pilot called out "Mayday" three times. The recording offered no direct clues as to why the plane was in distress.

"I've never seen anything like this," a volunteer rescuer surnamed Chen told the Reuters news agency.

Popular low-cost airline AirAsia lost its first plane on Dec. 28 when Flight 8501 crashed into the Java Sea with 162 people on board on its way from Indonesia's second-largest city of Surabaya to Singapore.

The twin-engine A320-200, carrying mostly Indonesian passengers, lost contact about 42 minutes after takeoff.

The pilot had sought permission to climb from 32,000 to 38,000 feet at a time when storm clouds reached up to 44,000 feet. Investigators say the jet went into a dangerously fast climb and stalled before crashing, and are looking into whether turbulence or updrafts contributed to its drastic climb.

Divers have so far retrieved 90 bodies. Authorities believe others are still inside the fuselage and other big pieces of wreckage.

A twin-propeller ATR 72-500 operated by TransAsia Airways crashed into homes on the island of Penghu in the Taiwan Strait, west of the Taiwanese capital, Taipei, as it made a second attempt to land on July 23. Four crew members and 44 passengers were killed; 10 passengers survived. There was heavy rain and low visibility at the time.

The crash was Taiwan's first deadly civil aviation accident since 2002. It involved the same airline and French-Italian make of plane as Wednesday's crash in Taipei.

All 298 passengers and crew aboard Malaysia Airlines Flight 17, mostly Dutch citizens, were killed when the Boeing 777 was shot down over rebel-held eastern Ukraine on July 17.

The plane was flying from Amsterdam to Kuala Lumpur at about 33,000 feet when, according to Dutch air crash investigators, it was likely struck by multiple "high-energy objects."

Dutch police say the plane most likely was shot down by a surface-to-air missile. Pro-Russian separatist rebels in Ukraine deny involvement.

International teams seeking to retrieve remains and salvage evidence had difficulty reaching the crash site due to clashes between Ukrainian government troops and Russian-backed separatist rebels. Forensic experts working in the Netherlands have since identified remains from all but three people.

Dutch prosecutors are coordinating an international criminal investigation into the downing.

The disappearance of Malaysia Airlines Flight 370 on March 8, 2014, is one of modern aviation's most perplexing mysteries. The Boeing 777, carrying 239 people from Kuala Lumpur to Beijing, is believed to have crashed off the coast of western Australia in the southern Indian Ocean. However, searches across vast areas of the Indian Ocean have failed to find any confirmed sign of it.

Officials initially ruled out terrorism, but conspiracy theories have endured. Until the wreckage is found and examined, it is difficult to say for sure what happened to the plane.

In a pre-recorded message broadcast on Malaysian television he said "it is with the heaviest heart and deepest sorrow that we officially declare Malaysia Airlines Flight MH370 an accident."