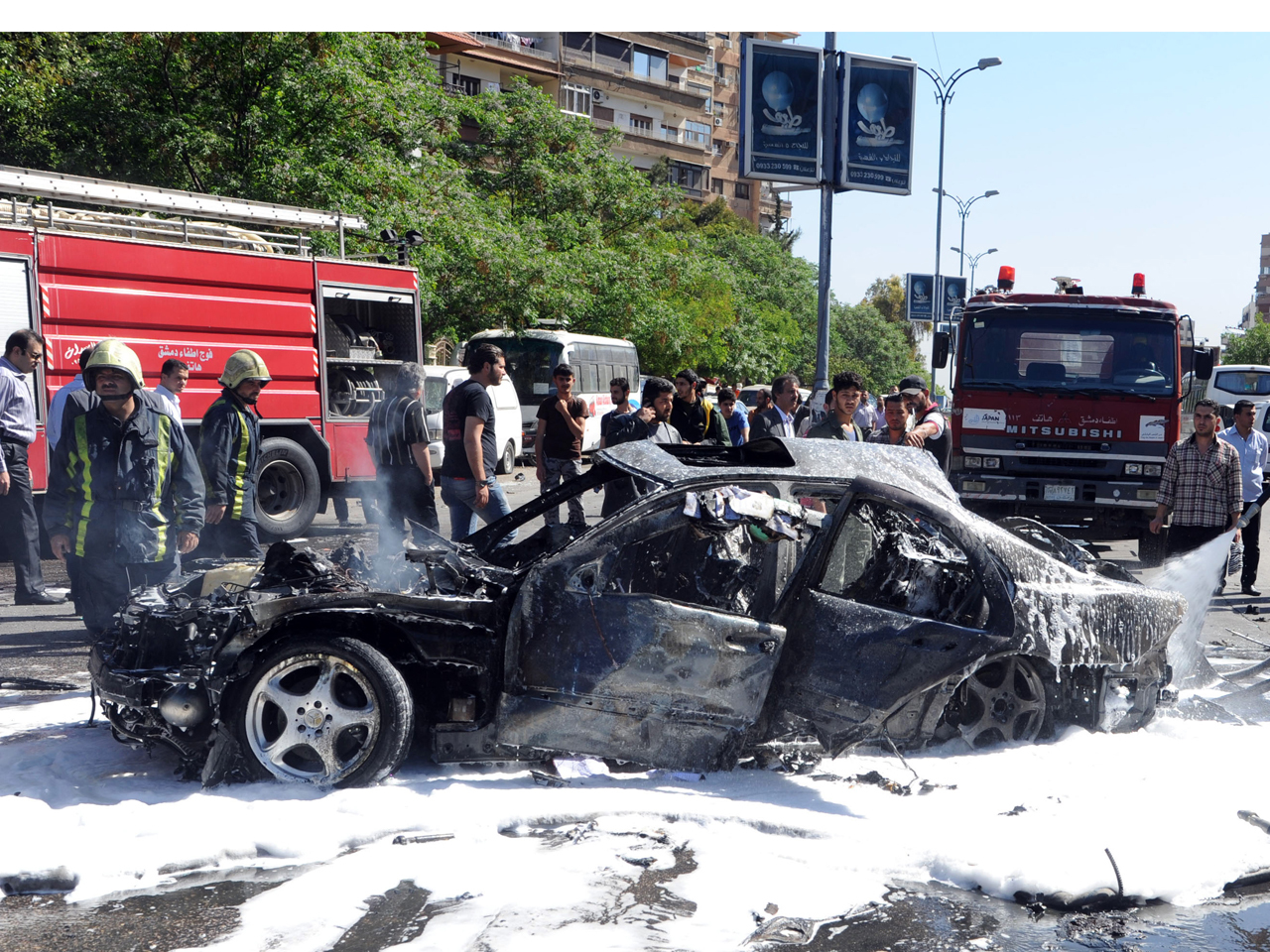 Prime Minister Wael al-Halqi was unhurt in the bombing in the capital's western neighborhood of Mazzeh, state TV said. The TV showed footage of heavily damaged cars and debris in the area of the blast as firefighters fought to extinguish a large blaze caused by the explosion.

The daring attack in the upscale neighborhood, which is home to many embassies and officials, was another blow to the government, exposing its vulnerability in the very seat of Assad's powerbase.

A Syrian government official told The Associated Press an improvised explosive device was placed under a car that was parked in the area and was detonated as al-Halqi's car drove by. The official spoke on condition of anonymity because he was not authorized to speak to the media.

The state-run Al-Ikhbariya station said al-Halqi went into a regular weekly meeting with an economic committee right after the bombing and showed him sitting around a table in a room with several other officials.

The TV said it was showing the video as a proof that al-Halqi was not hurt. But the prime minister's comments after the meeting did not refer to Monday's blast and he was not asked about it by reporters, leaving doubts as to whether the footage was filmed before or after the bombing.

The Britain-based Syrian Observatory for Human Rights said the blast killed al-Halqi's bodyguard and that one of his drivers was in critical condition. The group relies on a network of activists around the country.

Monday's bombing also showed that anti-government elements in Syria are becoming increasingly brazen, striking in a highly secure Damascus neighborhood, only about 100 yards from the residence of the Swiss ambassador. Mazzeh is also home to a major military air base, and top officials live in the posh district.

The attack wasn't the first targeting a high official in the Syrian capital over the past year.

On July 18, a blast at the Syrian national security building in Damascus during a meeting of Cabinet ministers killed the defense minister and his deputy, who was President Bashar Assad's brother-in-law. That attack also wounded the interior minister.

In December, a car bomb targeted the Interior Ministry in Damascus, killing several people and wounding more than 20, including Interior Minister Mohammed al-Shaar. Initially, Syrian state media said al-Shaar was not hurt in the Dec. 12 blast. News of his injuries emerged a week later, after he was brought to neighboring Lebanon for treatment of a serious back injury.

There was no immediate claim of responsibility for Monday's attack.

Massive bombings like the one that struck the prime minister's convoy have been a trademark of Islamic radicals fighting alongside the Syrian rebels, raising concerns about the extremists' role in Syria's civil war.

Separately, Syrian state-run TV said there was an explosion Monday near a school in the capital, Damascus.

The TV says the blast hit the capital's western neighborhood of Mazzeh. The state-run news agency said there are casualties.

Damascus has been hit by a string of explosions in recent months that have left hundreds of people dead or wounded.

The Syrian government says Muslim extremists trying to overthrow Assad are to blame for the attacks.

Syria's conflict started with largely peaceful protests against Assad's regime in March 2011, but eventually turned into civil war. The United Nations says that more than 70,000 people have been killed in the conflict so far.