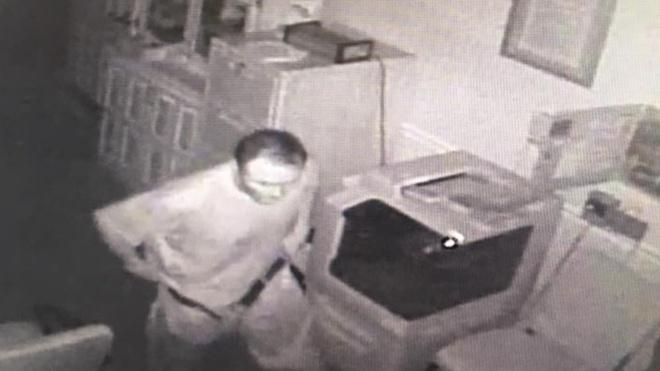 LEITCHFIELD, Ky. -- Police in Kentucky are seeking a man who allegedly broke into a funeral home and stole clothes from a man who was scheduled to be buried.

CBS affiliate WLKY reported Sunday that surveillance video shows the man going inside Watson and Hunt Funeral Home in Leitchfield last week, taking a nap, drinking soda and stealing candy and the keys to a hearse. The suspect then took clothing and jewelry belonging to a man who was to be buried.

Surveillance video from inside the funeral home shows the man rummaging through cabinets before digging through clothes meant for the deceased. The video shows the suspect removing his own clothes, then putting on clothing belonging to the dead man.

Police said the clothing was being stored in an office before the funeral, WLKY reports.

The nephew of the deceased man told WLKY he couldn't believe what happened.

"It's mind-blowing," Darrell Knight said. "I just can't imagine that somebody would do something like this. You know, to go into a funeral home and take something away from a deceased man."

Leitchfield police said in addition to the clothing and jewelry, the man stole an iPod, PlayStation3, and flat-screen TV.

"I can't see anyone in their right mind wanting to do this," Leitchfield Police Detective Kevin Smith told the station.

The funeral home director said he received tips about the man's identity, but police are still investigating. The director told the station the suspect was inside the funeral home for at least three and a half hours.

Police say the suspect might be connected to a Walmart theft last week.