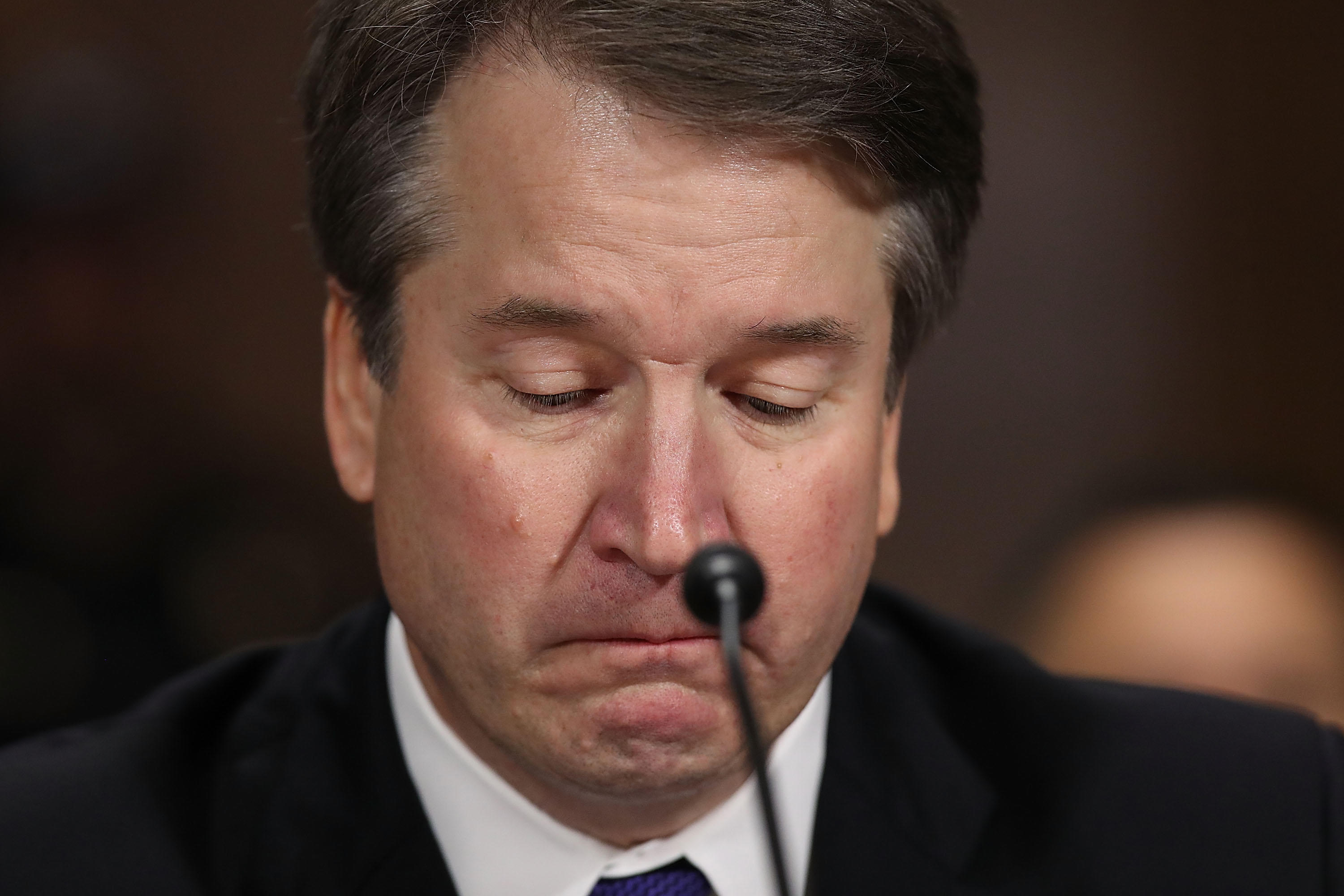 WASHINGTON -- In a statement released Sunday, a Yale classmate of Supreme Court nominee Brett Kavanaugh's said he is "deeply troubled by what has been a blatant mischaracterization by Brett himself of his drinking at Yale." Charles "Chad" Ludington, who now teaches at North Carolina State University, said he was a friend of Kavanaugh's at Yale and that Kavanaugh was "a frequent drinker, and a heavy drinker."

"On many occasions I heard Brett slur his words and saw him staggering from alcohol consumption, not all of which was beer. When Brett got drunk, he was often belligerent and aggressive," Ludington said. While saying that youthful drinking should not condemn a person for life, Ludington said he was concerned about Kavanaugh's statements under oath before the Senate Judiciary Committee.

"I have direct and repeated knowledge about his drinking and his disposition while drunk. And I do believe that Brett's actions as a 53-year-old federal judge matter," Ludington said. "If he lied about his past actions on national television, and more especially while speaking under oath in front of the United States Senate, I believe those lies should have consequences. It is truth that is at stake, and I believe that the ability to speak the truth, even when it does not reflect well upon oneself, is a paramount quality we seek in our nation's most powerful judges."

Ludington also wrote about an occasion he and Kavanaugh socialized where it allegedly landed a mutual friend in jail.

"On one of the last occasions I purposely socialized with Brett, I witnessed him respond to a semi- hostile remark, not by defusing the situation, but by throwing his beer in the man's face and starting a fight that ended with one of our mutual friends in jail," Ludington said.

Meanwhile, FBI agents on Sunday interviewed one of the three women who have accused Kavanaugh of sexual misconduct as Republicans and Democrats quarreled over whether the bureau would have enough time and freedom to conduct a thorough investigation before a high-stakes vote on his nomination to the nation's highest court.

The White House insisted it was not "micromanaging" the new one-week review of Kavanaugh's background but some Democratic lawmakers claimed the White House was keeping investigators from interviewing certain witnesses. President Trump, for his part, tweeted that no matter how much time and discretion the FBI was given, "it will never be enough" for Democrats trying to keep Kavanaugh off the bench.

In speaking to FBI agents, Deborah Ramirez detailed her allegation that Kavanaugh exposed himself to her at a party in the early 1980s when they were students at Yale University, according to a person familiar with the matter who was not authorized to publicly discuss details of a confidential investigation.

The person familiar with Ramirez's questioning, who spoke to The Associated Press on condition of anonymity, said she also provided investigators with the names of others who she said could corroborate her account.

But Christine Blasey Ford, a California professor who says Kavanaugh sexually assaulted her when they were teenagers, has not been contacted by the FBI since Mr. Trump on Friday ordered the agency to take another look at the nominee's background, according to a member of Ford's team.

Late Sunday, the Senate Judiciary Committee made public a previously unreleased interview with Kavanaugh from Sept. 26, before Ford and Kavanaugh openly testified Thursday. Kavanaugh denied all allegations against him and committee Democrats declined to ask questions, pointing out that the FBI should investigate.

"The White House isn't intervening. We're not micromanaging this process. It's a Senate process. It has been from the beginning, and we're letting the Senate continue to dictate what the terms look like," Sanders said.

White House counselor Kellyanne Conway said the investigation will be "limited in scope" and "will not be a fishing expedition. The FBI is not tasked to do that."

Senate Judiciary Committee member Jeff Flake, R-Arizona, requested an investigation last Friday -- after he and other Republicans on the panel voted along strict party lines in favor of Kavanaugh's confirmation -- as a condition for his own subsequent vote to put Kavanaugh on the Supreme Court.

Another committee member, Sen. Lindsey Graham, R-South Carolina, said Sunday that testimony would be taken from Ramirez and Kavanaugh's high school friend Mark Judge, who has been named by two of three women accusing Kavanaugh of sexual misconduct.

Sen. Dianne Feinstein of California, the top Democrat on the Judiciary Committee, called on the White House and the FBI to provide the written directive regarding the investigation's scope. In a letter Sunday, she also asked for updates on any expansion of the original directive.

Sen. Susan Collins said Sunday she is confident in the investigation and "that the FBI will follow up on any leads that result from the interviews." The Maine Republican supports the new FBI investigation and is among a few Republican and Democratic senators who have not announced a position on Kavanaugh.

Republicans control 51 seats in the closely divided 100-member Senate and cannot afford to lose more than one vote on confirmation.

Collins and Flake spoke throughout the weekend.

Senate Republicans discussed the contours of the investigation with the White House late Friday, according to a person familiar with the call who was not authorized to discuss it publicly.

Senate Majority Leader Mitch McConnell, R-Kentucky, had gathered Judiciary Committee Republicans in his office earlier. At that time, the scope of the investigation was requested by Flake, Collins and Sen. Lisa Murkowski of Alaska, said McConnell's spokesman Don Stewart.

Murkowski is not on the committee, but also has not announced how she will vote on Kavanaugh's confirmation.

Republicans later called the White House to discuss the scope of the probe, the person said.

McConnell's office declined to elaborate Sunday on which allegations would be investigated, reiterating only that it would focus on "current credible allegations." Stewart said the investigation's scope "was set" by the three GOP senators Friday and "has not changed."

But Democratic Sen. Mazie Hirono of Hawaii, a Judiciary Committee member, doubted how credible the investigation will be given the time limit.

"That's bad enough, but then to limit the FBI as to the scope and who they're going to question, that -- that really -- I wanted to use the word farce, but that's not the kind of investigation that all of us are expecting the FBI to conduct," she said.

Mr. Trump initially opposed such an investigation as allegations began mounting but relented and ordered one Friday. He later said the FBI has "free rein."

"They're going to do whatever they have to do, whatever it is they do. They'll be doing things that we have never even thought of," Mr. Trump said Saturday as he departed the White House for a trip to West Virginia. "And hopefully at the conclusion everything will be fine."

He revisited the "scope" question later Saturday on Twitter, writing in part, "I want them to interview whoever they deem appropriate, at their discretion."

Sanders said Mr. Trump, who has vigorously defended Kavanaugh but also raised the slight possibility of withdrawing the nomination should damaging information be found, "will listen to the facts."

At least three women have accused Kavanaugh of years-ago misconduct. He denies all the claims.

The third woman, Julie Swetnick, accused Kavanaugh and Judge of excessive drinking and inappropriate treatment of women in the early 1980s, among other accusations. Kavanaugh has called her accusations a "joke." Judge has said he "categorically" denies the allegations.

Swetnick's attorney, Michael Avenatti, said Saturday that his client had not been contacted by the FBI but was willing to cooperate with investigators.