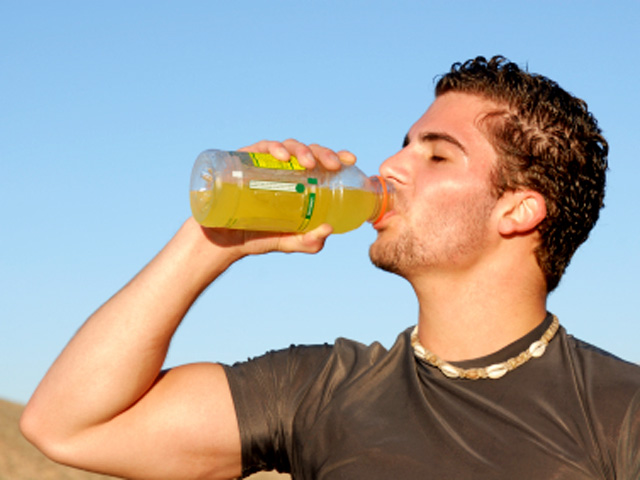 (CBS News) Energy drinks and sports drinks might provide a quick boost for consumers, but at the cost of their teeth. A new study finds people who drink these types of beverages are "essentially bathing their teeth with acid," the authors said.

The study, published in the May/June 2012 issue of General Dentistry, examined the acidity levels in 13 sports drinks and nine energy drinks to see how the drinks would impact a tooth's enamel. Researchers determined acidity levels can vary between brands, as well as certain flavors of the same brand. To determine what those acid levels did to  teeth, researchers immersed human tooth enamel samples into each beverage for 15 minutes, followed by immersing the samples in artificial saliva for two hours, four times per day over a five-day period.

What did they find? As few as five days after exposure to both types of drinks, enamel damage presented. The researchers saw energy drinks in particular caused double the amount of damage to teeth that sports drinks caused.

Study author Dr. Poonam Jain, director of the community and preventive dentistry program at Southern Illinois University in Edwardsville, said in a news release that lots of patients she sees are surprised to learn how bad these drinks are for teeth. That's especially true for teens - between 30 and 50 percent of teens have reported consuming energy drinks and up to 62 percent of teens saying they drink at least one sports drink per day, she said.

"Young adults consume these drinks assuming that they will improve their sports performance and energy levels and that they are 'better' for them than soda," Jain said in the statement.

Dentist Dr. Jennifer Bone, spokesperson for Academy of General Dentistry, the organization that publishes the journal, said in the statement that teens and adults should curb their intake of these types of drinks. If they're going to drink one anyway, she recommends they chew sugar-free gum or rinse their mouth with water after drinking the beverage.

"Both tactics increase saliva flow, which naturally helps to return the acidity levels in the mouth to normal," Bone said.

The American Beverage Association came to the defense of the drinks, slamming the research behind the study.

"This study was not conducted on humans and in no way mirrors reality," the ABA's statement read. "People do not keep any kind of liquid in their mouths for 15 minute intervals over five day periods. Thus, the findings of this paper simply cannot be applied to real life situations."