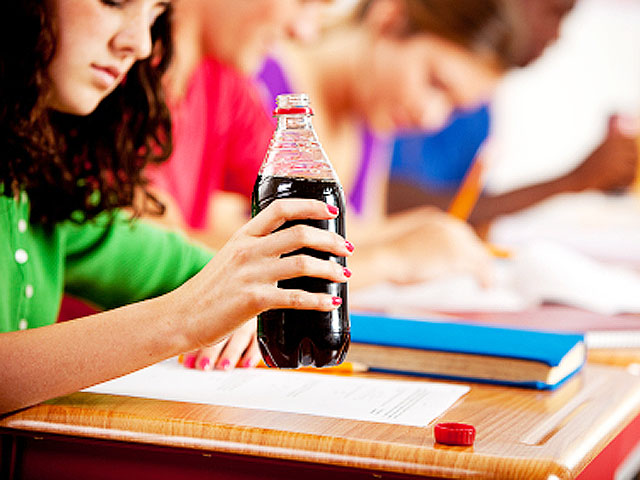 Schools across the country have stepped into the role of health police, banning the sale of sugary sodas from kids. But while the bans might make a can of soda harder to come by, a new study found kids are still gulping plenty of sugary drinks.

For the study - published in the Nov. 7 issue of Archives of Pediatrics and Adolescent Medicine - researchers surveyed 6,900 public school students across 40 states, asking about their access to sugared drinks and how much they drank. Some states banned all sugary drinks, others just soda, some had no ban at all.

Researchers found that two-thirds of students said they had access to purchase a sugary drink in schools that had a soda ban in place. The study also showed 85 percent of students said they drank a sugary beverage within the past week - regardless of if their school banned them - with up to 33 percent saying they drink one daily.

Where are students getting the drinks? The study authors said in some states that only ban soda in schools, students might be turning to other sugared juices and sport drinks throughout the day.

"The most unequivocal finding was that laws that focus on soda are just not getting it done," study author Dr. Daniel Taber, postdoctoral research associate at the University of Illinois at Chicago, told the New York Times.

Some experts are just plain dubious of a ban's effectiveness.

"One thing that's not really well appreciated is that the taste for sweetness is something we're born with," Dr. Rae-Ellen Kavey, a professor of pediatrics at the University of Rochester Medical Center in Rochester, N.Y., who was not involved in the study, told HealthDay. "People like sweet things, so just making them unavailable in one source is not likely to address something we really like that's available in many other places."

Does that mean soda bans a waste of time?

"I wouldn't see this as a failure, it's just that that's not going to be enough," Taber told Reuters.

What else can be done? Taber told CBS News in an email that policy-makers need to consider initiatives such as sweetened beverages taxes, marketing regulations, and nutrition education programs, in an effort to target all areas of the student's environment.

Said Taber, "In order to reduce adolescent sweetened beverage consumption, we need comprehensive policies both within and outside of school."