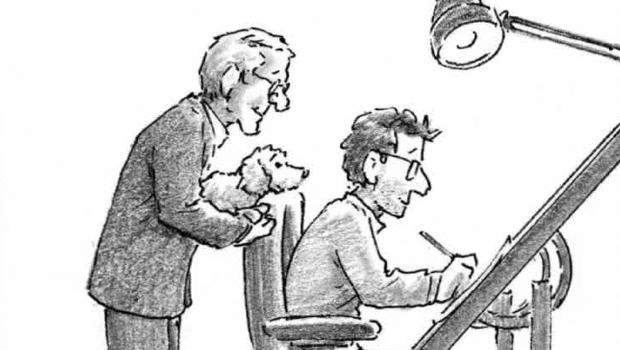 The man who has made millions laugh finds himself chuckling, and the cartoon Steve Martin finds so amusing is one he helped create: "I kind of like this one. It made me laugh for, like, a day: 'Attila the Honeybunch.'

"It's that word honeybunch, kinda makes me laugh."

Martin, who collaborated with New Yorker cartoonist Harry Bliss, calls cartooning comedy's last frontier. "It was a completely unique experience,' he said. "It's the precision of one thing. This is a one-second link between the picture and the words, or something with no words, you know?"

Martin has certainly covered a lot of ground in his half-century career, as a stand-up; a star of classic film comedies; a writer of movies, plays, short stories, novellas, a novel and tweets.  Did we mention his Broadway musical? And he also plays the banjo. [I'm sure we've left something out but we haven't got all morning.]

Correspondent Mo Rocca asked, "You could just sort of rest on your laurels and take a victory lap. But something makes you wan to keep doing something new?"

Martin said, "I often think, 'I don't have another idea in my head, I don't, and I'm fine if I don't have another idea, I've got plenty to do. It's completely fine.' And then you realize sort of something's going on, like with the cartoons. You go, 'Oh, I guess I did. I didn't even realize it.' And I also really like, I guess there was a little bit of proving myself to myself, by being able to come up with these little pinpoints of comedy."

Those "pinpoints of comedy" became a book, called "A Wealth of Pigeons." But buyer beware.

"The one complaint," Rocca said, " is that it's called 'A Wealth of Pigeons,' but there are no pigeons in it?"

Martin explained: "We had a cartoon we were going to draw called 'A Wealth of Pigeons,' and the premise was you'd have, you know, a person in the park feeding the pigeons, and then there would be these very wealthy pigeons at the feet. And that was the joke. And suddenly we just thought, 'What an interesting title.'"

The other thing not found in the book? Politics.

"I keep my politics to myself," Martin said. "And now we're in an age where vitriol is extremely common. So if you, for example tweet something the wrong way, then you get all this vitriol, which I have no interest in."

"Martin Short and I, when we do our show, we don't do politics in our show," Martin said, "because if you do a political moment, then you hear the audience goes, 'Boo,' and then another side goes, 'Yay!' They're suddenly this entity that's at war with each other. And that's not why we're there. We say, 'You know, you paid this money. You're gonna go home and I want you to think, That was the best show I've ever seen.' That's what we want. We're not there to teach anybody anything; they get enough of that."

Bliss said, "The first two cartoons that, I think the one that you had sent, was really funny. The opposable thumbs."

"Yeah, my wife kept saying, you know, like, why dogs don't have the supreme, they have intelligence, but they don't have supreme intelligence because they don't have an opposable thumb," Martin said. "So I thought, yeah, I think I could make a cartoon out of that with a little dog sitting, begging for money. And a little sign that says, 'I have no thumbs.'"

They worked over email – Martin sending ideas and captions, Bliss sending drawings. "If I write Harry and I say something like, 'Spaceship,' he goes, 'Ooh, I love to draw spaceships!'" Martin said.

And back and forth it went, at all hours.

"Oh, the thing I'd worry about is going back to sleep and then forgetting it once you wake up," Rocca said.

"I went through many ideas how to make the note without waking my wife," Martin laughed. "At first I bought a children's slate, you know, like, runs on a battery, so I could write in the night with no backlit thing.  … It's like an Etch-A-Sketch, you can write on it. You press a button and it erases. And I did that. You know, I wrote several ideas and then accidentally pressed the button and erased it. Then I went to paper, which rattles.

"And then I finally just went, 'Okay, I'll use my phone and put the light way down low," Martin said. "But I find out, if you don't write it down, you've lost it."

One nice thing about cartooning, Martin said, is that there are fewer people to please.

Rocca asked, "What's the ultimate test? Is it if it makes you laugh?"

"I think if it makes both of us laugh, that's our test," Martin said. "If we like it. You know, it's actually the first comedy that I've done where it didn't depend on the audience."

Some of the cartoons are unmistakably Steve Martin. Rocca said, "This one is impossible not to read in Steve's voice."

"That's a good point," Bliss said. "You did mention the idea of doing an audio book for this?"

"I wondered if it was possible to do an audio book," laughed Martin, "where I would say, 'Okay, there's a dog staring at a door, and the dog is thinking, Bark or stare? Always a tough decision. Bark? Maybe stare? Whimper? Maybe. Meanwhile, stare."

But Steve Martin may not have time to record the audiobook; he and Bliss are already working on new material.

"By the way, I did have an idea for a cartoon with a pun in it – and I usually never send you puns," Martin said. "But I'm gonna say it now here on television so I can be ridiculed all over the nation. And the cartoon was this: It's exterior of a college building. And it says, 'College of Psychic Studies.' And then there's a mother and a young woman, you know, like, an 18-year-old student there. They're talking to the professor. And the mother says, 'How much is the intuition to go here?'