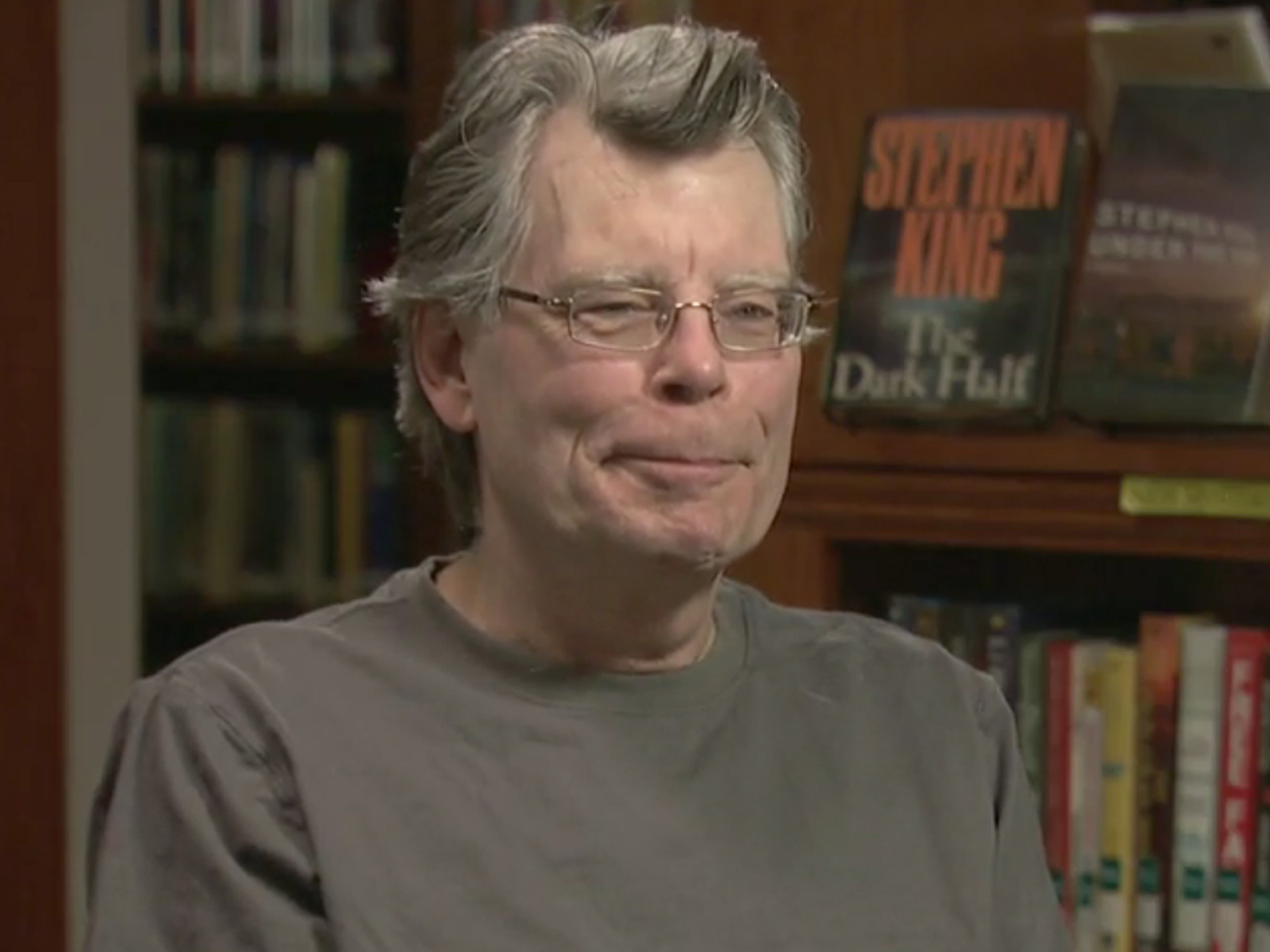 (CBS News) Stephen King is a gifted author with shelves full of scary books to his credit . . . and enough TV shows and movies to give anyone the jitters. This morning he talks with Anthony Mason for this Sunday Profile

Bridgton, Maine, was home for writer Stephen King in the 1970s, and it inspired the fictional town of Chester's Mill, which, in his 2009 novel, is trapped "Under the Dome."

"When you were here did you sort of envision where the dome would come down?" Mason asked.

"Yeah, I knew exactly," King replied -- and he could show Mason the spot, on the old map still posted on Main Street.

"In the book this would be Route 119, it goes up through here, and the dome would be here," he explained.

This Summer, King's novel about a glassy dome descending on an unsuspecting town is being brought to life in a CBS series.

"It sort of came to me that if I could put a dome over an American town, it would be a microcosm for what's going on in the world itself, where we have finite resources, and we really have nowhere to go," he said.

"I like the idea of a small town, too, because people have got that 'Waltons' vibe, where everybody gets along, everybody knows everybody," King continued. "And I thought, well, if you put people under pressure, what happens then?"

Mason asked King if writing is a compulsion for the 65-year-old author: "Or do you need to have some story that just gets in your brain you can't get out?"

"It's a compulsion," King replied. "For one thing, when I was younger, my head was like a traffic jam full of ideas, and they were all jostling, and they all wanted to get out. And I wrote a lot more than I write now. I still write every day."

King was a public school teacher when he published his first book in 1974. He'd almost thrown the manuscript away, but his wife Tabitha saw something in "Carrie," the story of the girl with kinetic powers.

The paperback rights would sell for $400,000. A relentless parade of bestsellers has followed.

Mason asked, "Where did your interest in the dark side come from?"

"I don't know, I don't know," King laughed. "I could tell you, but then I'd have to kill you. I started off as a fan of movies about giant bugs that swallowed New York and Los Angeles -- I liked the idea that there was something, that things would get out of control, and somebody would battle to put control back in their lives."

In "Under the Dome," the local radio station tries to bring order back to the confused town.

WEB EXTRA VIDEO: Stephen King and Anthony Mason on the set of "Under the Dome." Click on the player below.

Mason and King visited the set of the show, in Wilmington, N.C. King is the show's executive producer.

What does that mean? "Well, I think it means that I will be a nice guy and give them pretty much carte blanche when it come to taking my situation and expanding it," King said.

Well over 100 film and TV adaptations have been made from King's novels and short stories. But he hasn't always been happy with what's come out.

"I can think of a lot of movies that I just have to kind of bite my lip about," he said. "There have been about seven sequels to 'Children of the Corn' -- all of them have been awful.

"But you know what? I also directed a dog myself. I made a picture called 'Maximum Overdrive.' So I'm responsible, too, for that.

"But a lot of these movies have been pretty darn good. 'Carrie' was pretty good. Frank Darabont did a great job with 'Shawshank Redemption,' and also with 'The Green Mile.'

"No, I never liked that movie. I always thought that 'The Shining,' the Kubrick version of 'The Shining,' was like this big beautiful Cadillac that had no engine inside of it."

In the film "The Shining," Jack Nicholson plays Jack Torrance, a writer who becomes possessed by the ghosts of a haunted hotel, and tries to kill his wife and son.

"I never liked Shelley Duvall in the Kubrick version; I thought she was just sort of a scream machine," King said. "And there's something very misogynistic about the way she was presented."

He disliked Stanley Kubrick's version so much that he bought back the screen rights, and in 1997 made his own miniseries.

"Part of the deal was that I would not say any more nasty things about the Kubrick version," King explained. "For a long time I hewed that line. And then Mr. Kubrick died. So now I figured, what the hell. I've gone back to saying mean things about it," he laughed.

King has just finished writing a sequel to "The Shining." "Dr. Sleep," which will be published in the Fall, will be his 51st novel.

All of King's books are still in print -- except one.

"That book is 'Rage', yeah," said King. "It's not in print because it's a novel about a kid who goes to school one day and shoots his Algebra teacher and holds his class hostage."

In 1997, "Rage" (published under the pseudonym Richard Bachman) was found in the locker of a high school student who shot three of his classmates in Kentucky.

"That was enough for me," King said. "I don't think books or movies are ever the cause of this sort of violence."

But he believes they can act as an accelerant. "I didn't want 'Rage' to be one of those accelerants, so I pulled the book," he said.

"Even though you didn't think it caused it, you didn't want the book to be out there?"

"I felt it was part of what became a fantasy scenario with these people. And I didn't want it to happen with anybody else. So it was not gun control, it was book control in this case.

"And I think," King continued, "there are a lot of pro-gun people, like Wayne LaPierre [executive director of the National Rifle Association], who can take a lesson from that and show more responsibility. I have no patience with people of the LaPierre stripe who say the deaths of innocent children, or the deaths of unarmed bystanders, is just part of the price we pay for our Second Amendment freedoms."

He's sold more than 350 million books. His stories have made a deep and indelible imprint in our popular culture. But Stephen King once described himself as "a man many see as a rich hack."

"You used to always get slotted in the Horror genre," said Mason. "And I think it was sort of a way of some people, I think, not treating you all that seriously as a writer."

"I don't know if I want to be treated seriously per se, because in the end posterity decides whether it's good work or whether it's lasting work," King said.

"Do you feel like yours is going to last?"

"Do you ever look up at your book shelf and go, like 'I can't believe I've done all this?" Mason asked

"I do believe I did it," said King, "but I can't really remember it. It's like I did it in a series of really wonderful dreams."