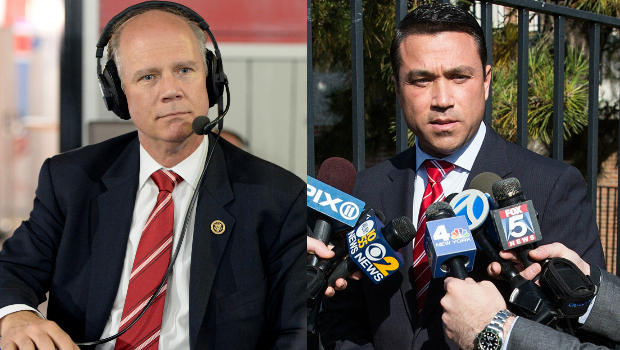 President Trump sent two tweets Wednesday in support of Rep. Dan Donovan, who is locked in a close GOP primary race with fellow Republican Michael Grimm. Grimm represented the district in Congress from 2010 until he resigned in 2014 after pleading guilty to tax fraud.

Mr. Trump wrote that Donovon is "strong on Borders & Crime, loves our Military & our Vets, voted for Tax Cuts and is helping me to Make America Great Again." In the second tweet, Mr. Trump asked supporters to "remember Alabama," when populist Republican Roy Moore won the GOP primary, but then lost the special election to Democrat Doug Jones. Mr. Trump backed Moore's challenger, Luther Strange, in the primary but then backed Moore in the general election, despite allegations that he pursued teenagers when he was in his 30s.

New York's 11th District, which encompasses Staten Island and a portion of south Brooklyn, is the only district in New York City with a Republican in Congress. Mr. Trump won the district with 56 percent of the vote, and both Donovan and Grimm have campaigned as candidates in line with Mr. Trump.

Donovan participated in a roundtable last month with Mr. Trump and other federal and state officials on Long Island to discuss MS-13. Donovan told local news station Spectrum 1 News after the event that they "didn't talk about" an endorsement.

Grimm has been endorsed by Mr. Trump's short-lived communications director, Anthony Scaramucci. Scaramucci campaigned with Grimm at an event two weeks ago.

Even though Grimm served seven months in prison, he remains popular on Staten Island. He hasn't referenced Mr. Trump's endorsement of his challenger, but he tweeted Wednesday that "all the endorsements in the world can't change the facts."