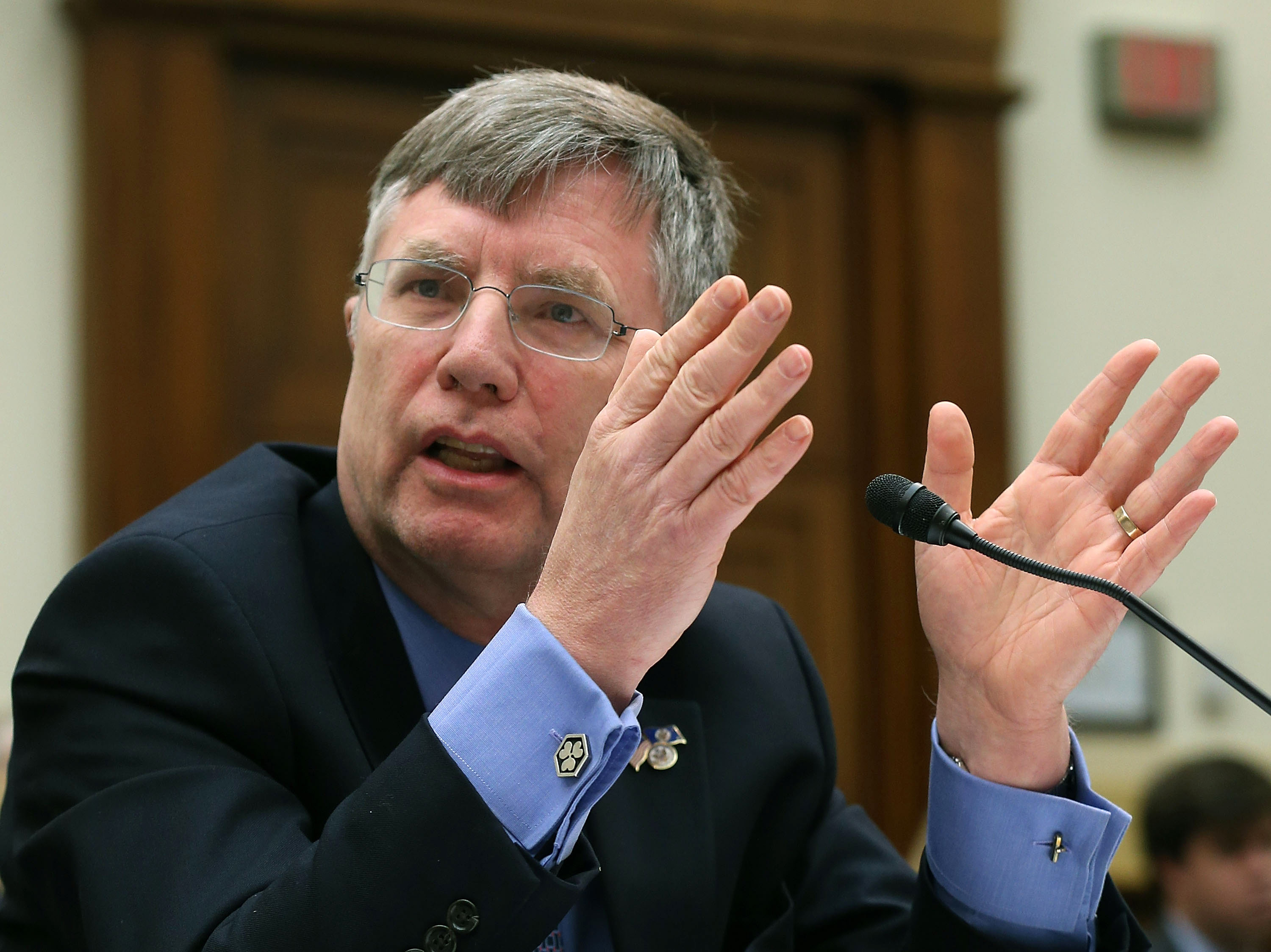 Patrick Kennedy, the State Department's undersecretary for management, faced questioning for the first time since a Republican House committee report faulted him in his management role at the State Department for security lapses leading up to the Sept. 11, 2012 terrorist attacks on Americans in Benghazi, Libya.

Republicans pummeled Kennedy while Democrats largely defended him and the State Department. Questions ranged from why four of Kennedy's subordinates faced disciplinary action for "leadership" failures, while Kennedy and other more senior officials did not; to why Kennedy did not wish to deploy an inter-agency emergency response team.

At Wednesday's hearing, Kennedy also acknowledged publicly for the first time what CBS News reported last May: that he advised against deploying the government's interagency Foreign Emergency Support Team known as "FEST."

"The ARB downplayed Kennedy's role in the decision-making that led to the inadequate security posture in Benghazi," concluded the Republican report.

Kennedy told members of the House Foreign Affairs Committee that he did not approve U.S. Ambassador to Libya Christopher Stevens' and his security team's requests to keep the 16-man military site security team (SST) because its mission had concluded, they wouldn't have helped in Benghazi, and they were replaced with Diplomatic Security officers. But the head of the SST team, Lt. Col. Andrew Wood has told CBS News that he would likely have sent at least some of his men to Benghazi with Stevens had they been allowed to stay, and that his soldiers had specialized training in counterterrorism that the Diplomatic Security officers did not have.

Kennedy partly blamed limited funding as to why the U.S. compound in Benghazi wasn't safer. "The best defense is the ability to construct new facilities..." said Kennedy. He also said the State Department only had Marine security guard detachments to deploy to 152 out of 285 posts and Benghazi was not among those staffed.

Asked why he didn't want the FEST team deployed to Benghazi, Kennedy said there was "no need for it."

"I said no for two reasons," Kennedy told Rep. Christopher Smith, R-N.J. "I was simply asked do I need the capabilities of the FEST. And since it did not bring any military assets to bear, [and] it was based in the U.S. and would have taken at least 16 or 18" hours.

Kennedy's view of FEST is at odds with that of FEST leader Mark Thompson. He previously testified that Benghazi was precisely the sort of crisis to which his team is trained to respond, and that nobody knew at the outset how long the crisis was going to last. FEST's mission statement describes a seasoned team of counterterrorism professionals who can respond "quickly and effectively to terrorist attacks... providing the fastest assistance possible" including "hostage negotiating expertise" and "time-sensitive information and intelligence."

Obama administration officials argue FEST most certainly wouldn't have made it to Benghazi in time. But officials familiar with FEST say it could have helped pave the way for the FBI to get into Benghazi much faster than the three weeks that it ultimately took. An administration official who was part of the Benghazi response told CBS News of FEST last May: "I wish we'd sent it."

As to the location of Benghazi survivors, Kennedy said "one was seriously injured in the second attack and is still in the hospital, the other four have resumed duties" in posts around the world.

The State Department has declined to make the survivors available for interviews with congressional investigators. House Oversight Committee chairman Rep. Darrell Issa, R-Calif., has threatened to issue subpoenas for their testimony of Secretary of State John Kerry doesn't change his mind about producing them.

Rep. Ted Poe, R-Texas, asked Kennedy whether Ansar Al-Sharia was responsible for or involved in the attacks in Benghazi. Kennedy responded, "I know that this was a terrorist attack and it doesn't matter to me whether it was Ansar Al-Sharia or al Qaeda or whoever. These were terrorists and whatever organization they belong to, they are enemies of the United States and they must be brought to justice."

Rep. Adam Kinzinger, R-Ill., countered, "I think it does matter...because ultimately, it gives us a blueprint on who we need to kill or capture, which I think is very important and I hope that's done."

Kennedy fielded a variety of other questions. When asked why certain rescue attempts or responses weren't made, Kennedy repeatedly told Congress "There were no stand-down orders... There was never a stand-down order."

Rep. Ileana Ros-Lehtinen, R-Fla., asked about coordination between the White House, then-Secretary of State Hillary Clinton and then-Defense Secretary Leon Panetta and Kennedy answered, "I hate to speak for the President of the United States...But..what I have been briefed on is...as soon as the president learned of the attack...he immediately acted to ensure that our military and national security staff could secure and assist our embassies around the globe."

Kennedy said he doesn't believe that the administration has asked any federal employees to sign nondisclosure agreements after Benghazi. And despite multiple warnings about the deteriorating situation in Benghazi, Kennedy said it wasn't enough to trigger alarm bells at the highest levels. "We had no actionable intelligence, as the Director of National Intelligence had said, about this threat in Benghazi. And therefore... I never went to the Secretary of State, and told her it was time to leave Benghazi."

Members of Congress repeatedly asked Kennedy about security measures enacted after the 1998 terrorist car bomb attacks at U.S. embassies in Nairobi, Kenya and Dar es Salaam, Tanzania, where 224 people were killed, including 12 Americans, and more than 5,000 were injured.

The U.S. Ambassador to Kenya, Prudence Bushnell, had warned eight months before that security at the Nairobi embassy was inadequate and twice requested a new building. She was injured in the bombing.

Afterward, Kennedy told reporters of Bushnell's request "unfortunately we lacked the money to respond." "[O]ther embassy projects had a higher priority than Embassy Nairobi for our limited funds. We just did not have the funds to meet all our needs."

As with Libya, the State Department had declined an offer of security assistance in Kenya from the U.S. military saying that it was unnecessary. Kennedy told a press briefing that the February before the East Africa bombings, "the U.S. military Central Command expressed to the Department its concern over the vulnerability of the Nairobi chancellory," and was also concerned that "the embassy was close to the street at a busy intersection." The military offered to do a survey of the embassy but "the [State] Department...declined the offer of the military to send one of their teams, because we had already scheduled a security assessment team to visit the post in March of this year," said Kennedy.

Kennedy also confirmed that the spring before the bombings, Ambassador Bushnell sent an emergency telegram to Secretary of State Madeleine Albright indicating that resource constraints "were endangering embassy personnel...and expressed concern about crime, administrative matters and safety..." but State Department headquarters told her that "a new building was ranked low in relative priority, compared to the needs of other embassies."

After the East Africa bombings, as with Benghazi, an Accountability Review Board was convened and made numerous recommendations to try to prevent terrorist attacks on U.S. missions from being successful in the future.

Thursday, the House Oversight Committee will hear from the two leaders of the Benghazi Accountability Review Board: Ambassador Thomas Pickering and Admiral Mike Mullen.