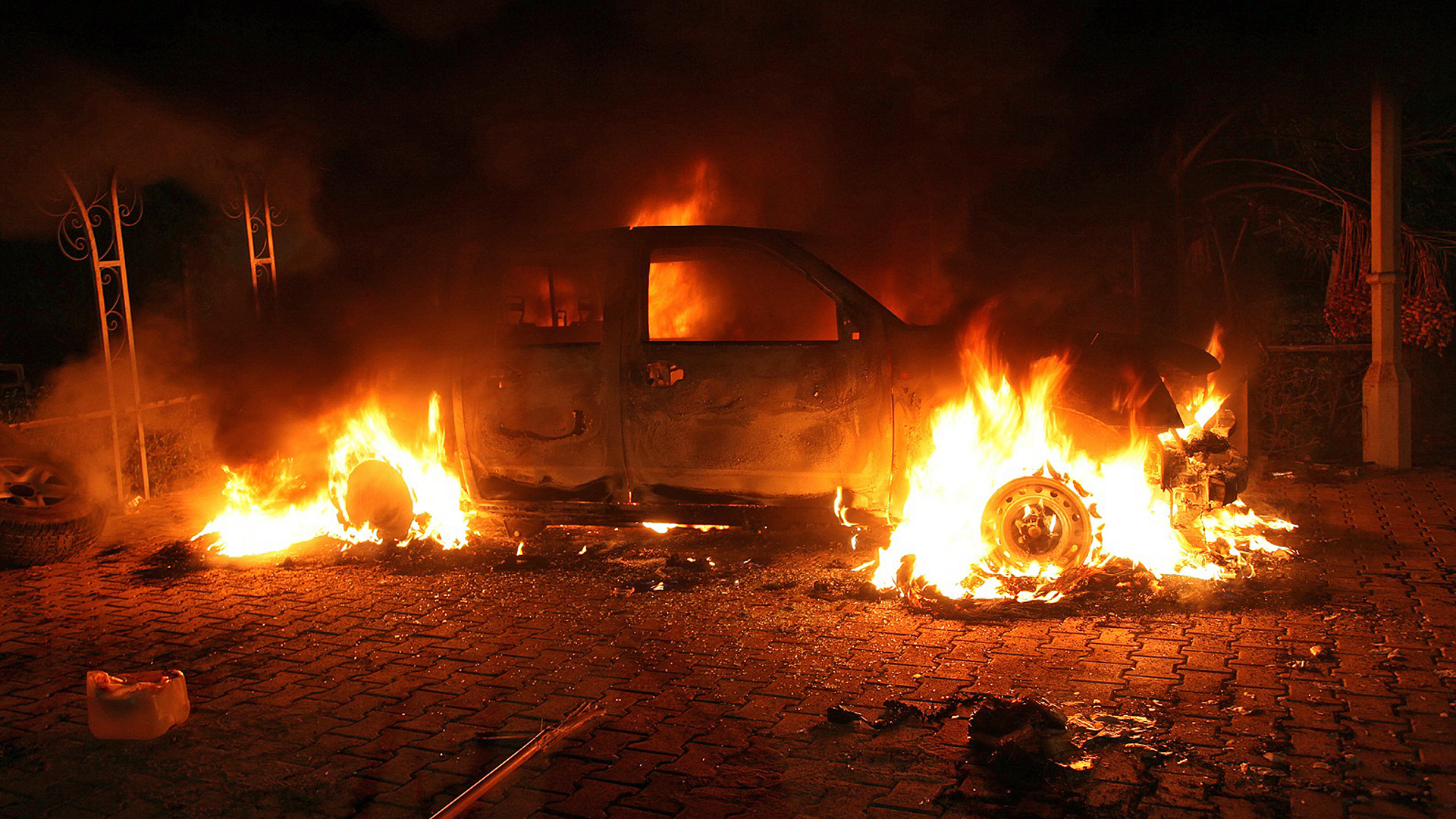 One year after the Sept. 11, 2012 terrorist attacks on Americans in Benghazi, Libya, no arrests have been reported but the Justice Department says investigators have made "very significant progress."

Four U.S. personnel, including U.S. Ambassador to Libya Christopher Stevens, were killed in mob assaults that moved from a U.S. diplomatic compound to a nearby CIA facility over a period of eight hours.

Last month, government officials confirmed that sealed criminal charges have been filed against suspects. They are said to include Ahmed Khattalah, who gave interviews in Benghazi with several news organizations admitting he was at the scene of the attacks but insisting he was not the "ringleader." Khattalah also said that nobody from the U.S. government had attempted to question him.

Sen. Lindsey Graham, R-S.C., and other Republican members of Congress recently sent a letter urging the new FBI Director James Comey to make Benghazi a top priority. Graham said that intelligence operatives have told him they have leads on suspects "but can't get approval to go after them."

A spokesman for the Justice Department tells CBS News that "the success of this investigation is a top priority" but would not provide details on its progress "to preserve its integrity."

White House spokesman Jay Carney, in a statement released Tuesday night, said, "We remain committed to bringing the perpetrators of the Benghazi attacks to justice and to ensuring the safety of our brave personnel serving overseas."

Benghazi remains a dangerous place, with militant groups continuing to attack offices of the relatively weak central government. Marking the one-year anniversary of the attack on the U.S. buildings, a bomb went off Wednesday outside a Foreign Ministry office in the city, causing significant damage but no confirmed deaths.

The top Democrat on the House Oversight Committee, Rep. Elijah Cummings, D-Md., told CBS News: "Although progress in bringing to justice the perpetrators of the Benghazi attacks may not be as rapid or as public as we may want, I am confident that our law enforcement and national security officials around the world are fully committed to this goal."

The Obama administration continues to keep a great deal of information under wraps citing an ongoing investigation, national security and other reasons. The secrecy is an ongoing point of contention with Republicans in Congress.

Tuesday, the House Oversight Committee sent a letter to Secretary of State John Kerry demanding the Bengahzi survivors be made available for interviews with Congress or else they may be subpoenaed.

According to the letter, the State Department told Congress on Aug. 23 that "it was not prepared to support the request for transcribed interviews." If that doesn't change within two weeks, committee Chairman Darrell Issa, R-Calif., said "I will have no alternative but to consider the use of compulsory process."

The FBI, CIA, Director of National Intelligence, Defense Department, State Department and National Security Agency have rejected or failed to answer multiple Freedom of Information (FOI) requests made by CBS News, as well as appeals of the denials. The agencies cite exemptions related to ongoing investigations or national security.

The conservative watchdog group Judicial Watch has filed four Benghazi-related FOI lawsuits against the Obama administration to try to produce withheld material. That includes the so-called "talking points" received by then-U.S. Ambassador to the U.N. Susan Rice prior to her appearance on news broadcasts in which she appeared to fault a spontaneous uprising rather than terrorists. After documents and testimony indicated that the attacks were widely seen as the work of terrorists from the start, nobody has explained how the video became a prevalent storyline.

Among other materials, CBS News is seeking a declassified version of surveillance camera video recorded during the attacks. The CIA had said it would be released around Thanksgiving of last year but after David Petraeus resigned as head of CIA amid a sex scandal, the video was never released.

CBS News is also seeking White House photos taken the night of the attacks and has asked for an accounting of President Obama's actions. The White House has refused to provide specifics other than saying with first news of the attacks, the president ordered that all necessary actions be taken.

"From the moment [the President] was briefed on the Benghazi attack, the response effort was handled by the most senior national security officials in government," said a White House official.

Meantime, Issa's committee plans to convene a hearing as early as next week to examine the actions of a State Department-appointed Accountability Review Board (ARB). The ARB, led by Ambassador Thomas Pickering and Admiral Michael Mullen, investigated inadequate security leading up to the attacks. Witnesses have told congressional investigators that the ARB never asked them about some key issues. And the ARB acknowledged it did not interview some personnel considered important, including then-Secretary of State Hillary Clinton who appointed four members of the ARB.

The committee's top Democrat, Rep. Elijah Cummings, D-Md., says it's important to focus on fully implementing the recommendations of the ARB to improve diplomatic security.

Cummings wrote a letter to Issa in May asking that Pickering and Mullen be invited to share their stories with the public.

"I believe it is important for ARB members to testify publicly for two reasons," Cummings wrote. First, he argued, if the committee is serious about improving security for American diplomatic personnel overseas, lawmakers and the public alike "should hear first-hand from the individuals who have done the most exhaustive review of these attacks."

Second, he said, it was important that ARB members have the chance to respond to "the serious charges you (Issa) have leveled against them."

"Innocence of Muslims" filmmaker in custody

The only person connected in any way to the attacks known to have been arrested and gone to prison is the Egyptian filmmaker who produced the controversial "Innocence of Muslims" video: Nakoula Nakoula. However, the arrest wasn't for making the video, which is a legal, constitutionally-protected exercise of free speech. It was for violating his probation in an earlier bank fraud case dating back to 2010.

Obama administration officials initially blamed the film's trailers posted on YouTube for inspiring what they termed a "spontaneous" uprising against Americans in Benghazi. Family members of the victims say when the bodies were flown back to the U.S., Clinton told them the U.S. government would "make sure the person who made that film is arrested and prosecuted."

Obama administration officials will not identify the supposed crime the filmmaker had committed. Critics, including Graham, say Clinton knew from the start that terrorists were likely to blame for the attacks and accuse her of faulting the video to divert blame at the height of the President's re-election campaign.

Two weeks after the attacks, Nakoula was arrested and charged with probation violation. Today, he remains in a federal minimum security facility in California where he's penned a self-published book he calls "Innocence," dedicated to Stevens and the other three victims: Sean Smith, Tyrone Woods and Glen Doherty. Nakoula told CBS News that nobody from the Obama administration ever spoke to him about his film, which he says is not "anti-Muslim." He claims it's about fighting for a "culture" and a "way of life" that are under siege.

Nakoula, a Christian, says he holds citizenship in both Egypt and the U.S. "I love the United States as my wife and Egypt as my mother," he says. "I'm not a criminal at all." He says it's ironic that the only person who's paid a price for what happened in Benghazi is not a terrorist but a Christian who tried to draw attention to a radical ideology.

Stevens' mother, Mary Commanday, has received an outpouring of condolences and well wishes since her son's murder. This includes hundreds of letters, including many from Muslims around the world who knew Chris through the diplomatic ranks.

More letters of condolences from Muslims were collected by an American Muslim group that said it wanted to "respond to an evil act with a good deed," to send condolence letters to the grieving family of a hero to show the majority of Muslims are against the senseless acts that took place. The group says it collected 7,000 letters from 110 countries in the first 11 days.

One letter addressed to the Stevens family reads: "I am sincerely unable to express the senselessness of those that committed the acts that took your loved one. THEY DO NOT SPEAK FOR MY RELIGION." Another reads, "It would be senseless to offer you an apology on behalf of my people, for I know that nothing will make up for your devastating loss. But I know that Chris will always live in the heart of six million Libyans day and night."

Commanday told CBS News it has been an extremely painful process to go through the letters and emails she's received.

Rep. Trey Gowdy, R-S.C., is one of the key Republicans investigating Benghazi. He tells CBS News "Benghazi matters as much today as it did on Sept. 11, 2012."

Gowdy wants to know why the State Department allowed a consulate that did not meet security requirements to remain open; what assets, if any, were en route when the siege ended; and was there any evidence upon which Susan Rice based her public pronouncements that this attack was a response to a video?

The Justice Department says it's "using every tool and resource available...to ensure that anyone who played any part in that attack will face justice, no matter how long it takes and no matter how far we must go to find them."