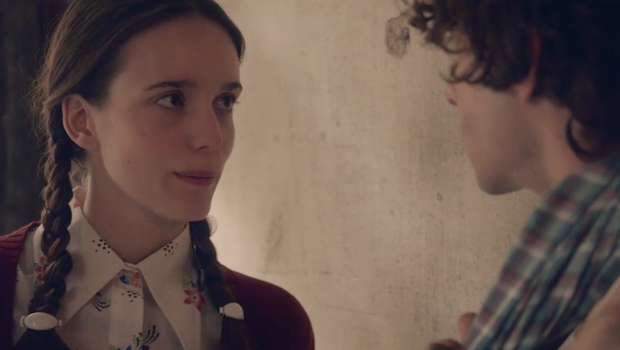 When one of the most talented filmmakers working today devotes his energies to a four-hour-long opus about a woman's insatiable sex drive, featuring graphic couplings with a snowball's chance of getting a mere R rating, interspersed with digressions about fly fishing, mathematics and Bach polyphony, attention must be paid.

Danish director Lars von Trier came to international renown with his award-winning 1996 film, "Breaking the Waves," starring Emily Watson as a young bride who engages in affairs with other men after her husband is paralyzed. In subsequent films, such as "Dancer in the Dark," "Dogville," "Antichrist" and "Melancholia," von Trier has tackled such disturbing themes as rape, murder, self-mutilation, grief, depression, and the end of all life on Earth.

With each succeeding film he seem to earn his reputation as the bad boy of international cinema (though he's not about to talk to the press about that any time soon).

In "Nymphomaniac," Charlotte Gainsbourg stars as Joe, a sex addict who recounts her lifetime as a libertine who spurns love, and explores every avenue of sexuality available to her, from anonymous hook-ups on trains and affairs with married men to threesomes and S&M.

As titillating as its synopsis may sound, the film is a talkfest: Joe spends most of her time on screen relating her life history to Seligman (Stellan Skarsgard), a cloistered middle-aged man who finds Joe beaten and bloody in an alleyway and brings her to his home, which resembles a monk's cell. There he listens to her incredulous tales of her sexual awakening; of using men; of destroying others' marriages; of rejecting therapy; and pushing the boundaries of what society deems to be acceptable behavior.

Gainsbourg, who has starred in von Trier's last two films, "Antichrist" (about a grieving mother engaged in grueling therapy with her husband-doctor in an isolated cabin in the woods), and "Melancholia" (about an impending Apocalypse), received an outline for "Nymphomania," and was attracted to Joe's stubbornness and pride in telling her life story (which mixes cruelty, humor and magical realism). In fact, Joe rebels against the label sex addict, as it implies a moral judgment.

"I think there's a lot of self-loathing," Gainsbourg said of her character. "She puts herself into a lot of suffering, but she wants to take the blame. She wants to feel responsible and to sway Seligman that she has used men as tools. But I think the fact that she's much more vulnerable than she [pretends] -- she has a lot of weaknesses -- that's what I find touching.

"Behind this whole shield of feeling that she hates love as much as she says she does, you can feel that she is such a stubborn partner, having those stubborn and reactionary ideas. By the end of the film I really believe that she accepts herself much more and that she has made a journey into accepting her weaknesses."

And what was it like watching herself on screen? "Very strange," said Martin, "but kind of amazing, 'cause I'm pretty sure I didn't do that!"

Stellan Skarsgard ("Ronin," "The Girl With the Dragon Tattoo") has worked frequently with von Trier, and says the director has changed greatly since his earliest films, before and after the release of the Dogme 95 Manifesto. [For a time von Trier and his peers vowed to forgo lighting, sets, props, special effects, tripods, and other standard features of big-budget film production, to get back to the basics of cinema storytelling.]

"All directors are control freaks, and they had sad childhoods sitting in a room creating their own worlds and will continue to do that. And he technically was very skilled. When you see the film 'Zentropa,' for instance, it's a brilliant job he'd done, but it's totally dead, it's like a block of ice. Why? Because he decided exactly what the actors should do, which meant there was no life in it. And he realized that, smart as he is.

"So he started doing the 'Kingdom' series, he created the Dogme Manifesto to take away his own tools, and eventually worked himself down [to the bare minimum]. In 'Breaking the Waves' we had total freedom. And he reduced it down to almost nothing when he did 'Dogville' and 'Manderlay' [filmed on bare stages, like a Beckett play], where you have a text, you have an actor, you photograph it and try to find a way get the actor to bring life to the text.

"And once he'd done that, and sort of found his way of working with actors, he started to bring back his tools. He started already in 'Antichrist,' and in 'Melancholia' which in some ways aesthetically is one of his most conventional films -- we even had tracking shots, I saw a crane on set, which I hadn't seen in many years!

"Working with him, to me, is not like going to work. It's like kids playing in a sandbox and we build things and we come up with things and we have fun doing it no matter how dark the material is."

"This guy was absolutely helpless when she was talking about having sex on the train, for instance -- he had no way to relate to it. The only thing he could come up with was, 'That makes me think of fly fishing,' which is absolutely stupid! But it also tells you something about him, and I find it quite endearing actually.

"The good side about my character is that he's totally not judgmental," Skarsgard said. "He does not judge her. And that is his attitude to life. He's curious about it, and he doesn't understand it, but he doesn't judge. He'd probably would come up with something stupid about Joe's behavior -- 'it's probably genetic' -- but by the end of the film, you know that he did not quite understand anyway, which is sad."

In fact, Stargard suggests that both his character, Seligman, and Charlotte's character, Joe, represent aspects of the director: "Lars is partly the nerd that I am, with all the curious knowledge of things that are absolutely useless -- fly-fishing and Fibonacci numbers -- and he's very politically correct, not very daring. But he's also the Joe character, the person that is struggling with finding a way to live in a society that doesn't necessarily accept you."

"Nymphomaniac" (the original cut of which is five-and-a-half hours long) is being released as two 2-hour installments. "Volume I" opens theatrically today; "Volume II" opens nationwide April 4. Both installments are also available now via Video on Demand.