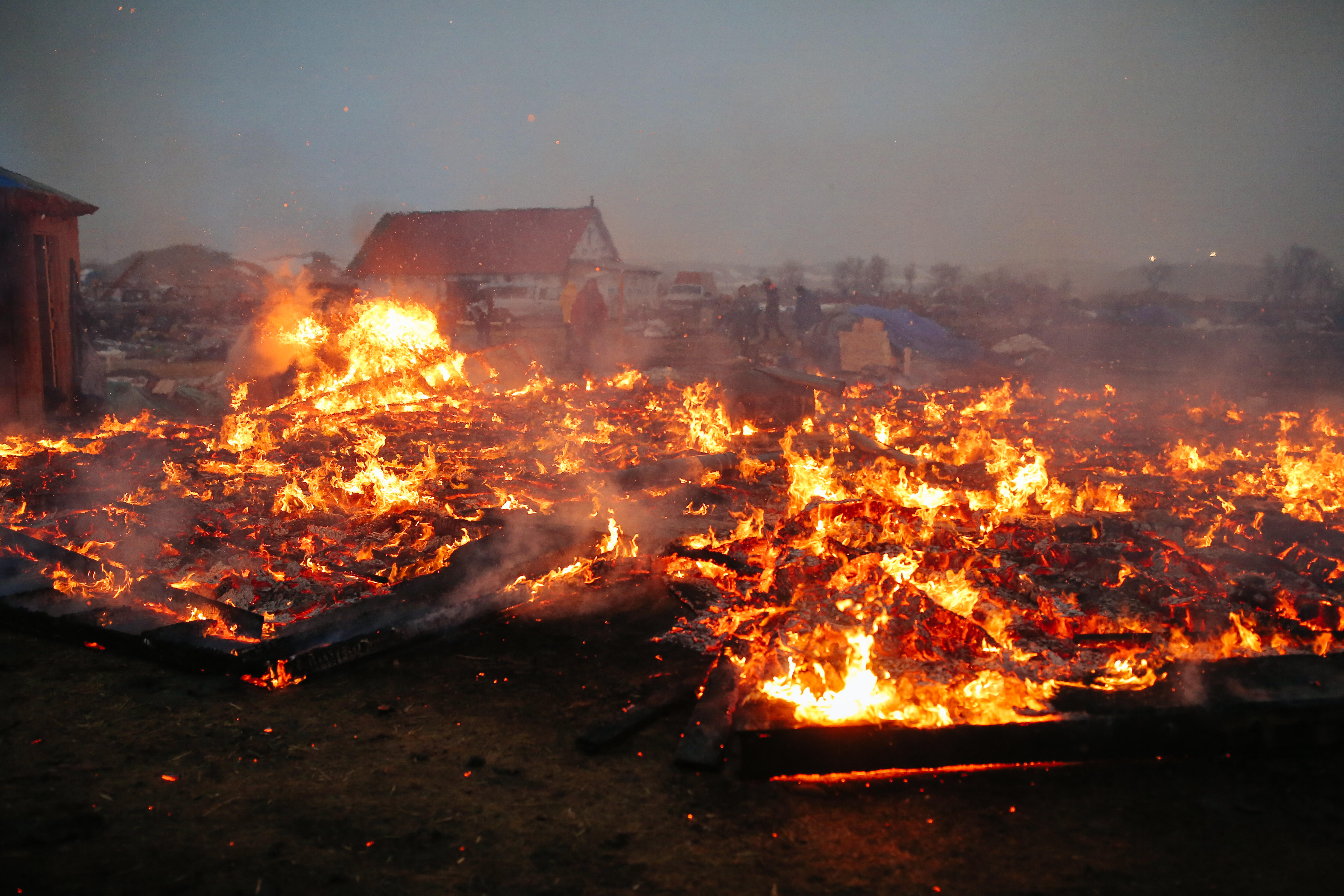 CANNON BALL, N.D. -- Most of the Dakota Access pipeline opponents abandoned their protest camp Wednesday ahead of a government deadline to get off the federal land, and authorities moved to arrest some who defied the order in a final show of dissent.

The camp has been home to demonstrators for nearly a year as they tried to thwart construction of the pipeline. Many of the protesters left peacefully, but police made some arrests two hours after the deadline.

Some of the last remnants of the camp went up in flames when occupants set fire to makeshift wooden housing as part of a leaving ceremony. Authorities later said about 20 fires were set and two people -- a 7-year-old boy and a 17-year-old girl -- were taken to a Bismarck hospital to be treated for burns. Their conditions weren’t given.

After the deadline to leave the camp passed, as many as 75 people outside the camp started taunting officers, who brought five large vans to the scene. Police took about 10 people into custody for failing to heed commands to leave, authorities said.

With darkness falling, Lt. Tom Iverson said police would not enter the camp Wednesday evening, and he offered no timetable for doing so.

Levi Bachmeier, an adviser to Gov. Doug Burgum, said about 50 people remained in the camp at dusk.

The Army Corps of Engineers had ordered all protesters to leave by 2 p.m. Wednesday, citing concerns about potential spring flooding. Hours before, about 150 people marched arm-in-arm out of the soggy camp, singing and playing drums as they walked down a highway. It was not clear where they were headed. One man carried an American flag hung upside-down.

Authorities sent buses to take protesters to Bismarck, where they were offered fresh clothing, bus fares home and food and hotel vouchers.

Some people packed up in cars.

“Right now there is a forced removal happening, an ethnic cleansing,” protester Chase Iron Eyes told Villafranca. Iron Eyes said he was leaving to avoid arrest, despite having stayed through the brutual winter.

The sheriff department said that between 50 and 75 people were still in the camp and will be arrested, Villafranca reported on Wednesday evening.

At the height of the protests, the site known as Oceti Sakowin hosted thousands of people, though its population dwindled to just a couple of hundred as the pipeline battle moved into the courts.

The camp is on federal land in North Dakota between the Standing Rock Sioux Reservation and the pipeline route that is being finished by Dallas-based Energy Transfer Partners. When complete, the project will carry oil through the Dakotas and Iowa to a shipping point in Illinois.

Some of the protesters were focused on moving off federal land and away from the flood plain into other camps, said Phyllis Young, one of the camp leaders.

“The camps will continue,” she said. “Freedom is in our DNA, and we have no choice but to continue the struggle.”

New camps are popping up on private land, including one the Cheyenne River Sioux set up about a mile from the main camp.

“A lot of our people want to be here and pray for our future,” tribal Chairman Harold Frazier said.

Others, including Dom Cross, an Oglala Sioux from Pine Ridge, South Dakota, said he planned to return home after living at the camp since September.

“There’s a lot of sadness right now. We have to leave our second home,” he said.

Law enforcement officers and first-responders were on hand from several states.

Charles Whalen, 50, an alcohol and drug counselor from Mille Lacs, Minnesota, said he and a group of about 20 people were not going to leave on their own and were willing to get arrested to prove their point.

“Passive resistance,” Whalen said. “We are not going to do anything negative. It’s about prayer.”

Some campers said they were leaving with mixed feelings, both energized by the long protest and saddened to leave new friends. Some people set off fireworks.

Matthew Bishop, of Ketchikan, Alaska, has been in North Dakota since October. He planned to move to another camp.

“People have been surviving here for hundreds and hundreds of years ... so if I back down, what would I look like?” Bishop said as he tied his possessions to the top of his car.

Craig Stevens, spokesman for the MAIN Coalition of agriculture, business and labor interests, said the group understands “the passions that individuals on all sides of the pipeline discussion feel” and hopes that protesters’ voices “will continue to be heard through other peaceful channels and in court.”

A massive effort to clean up the camp has been underway for weeks, first by protesters themselves and now with help from the Army Corps in removing debris.

Some vehicles and pedestrians were having trouble getting through the muck created by recent rain and snow, and cleanup efforts were suspended in part because camp officials did not want heavy equipment making conditions worse.

Meanwhile, construction on the pipeline has resumed, and completion of the one mile section is expected in less than 80 days, reports Villafranca.