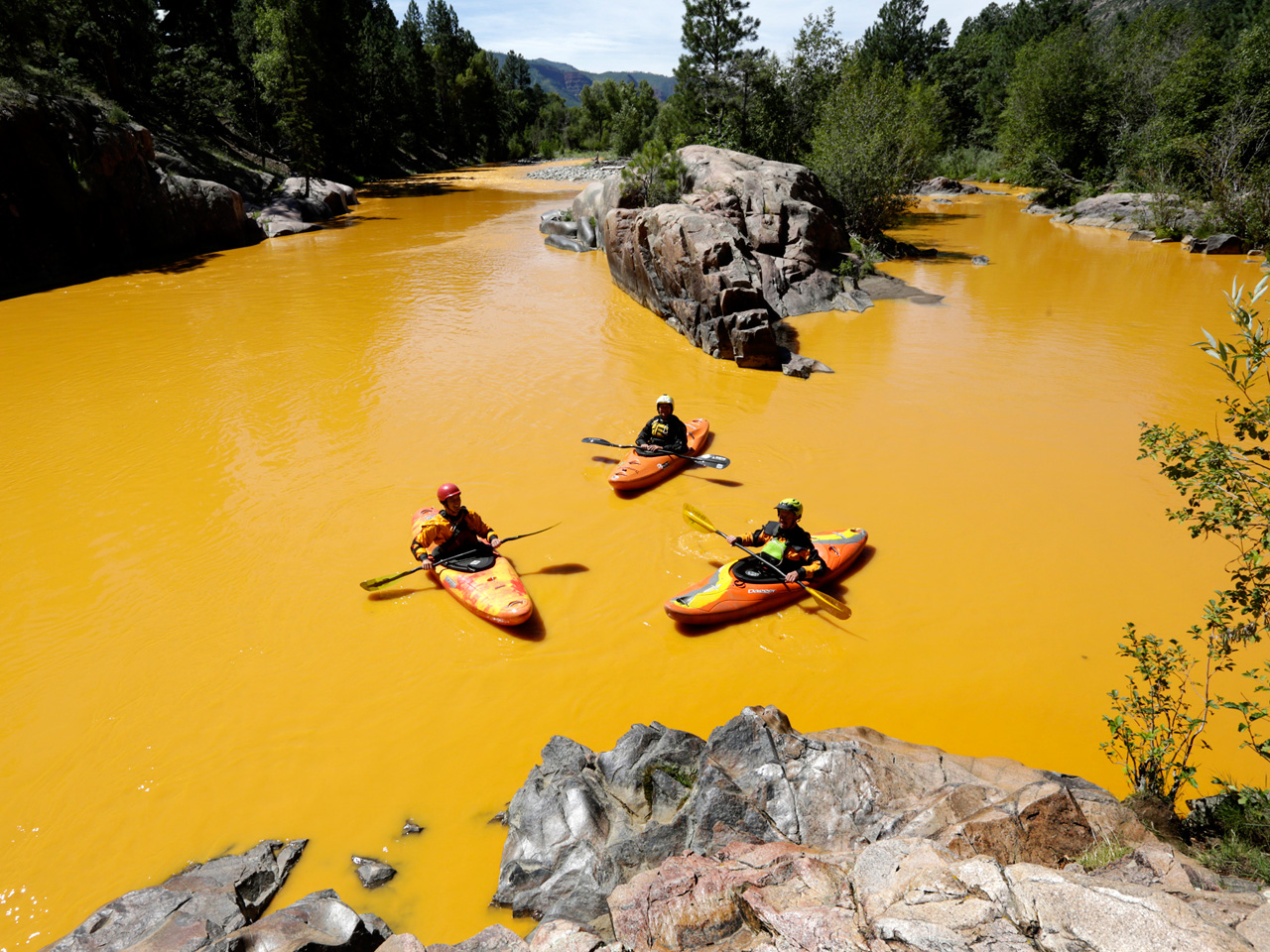 A week ago, the Animas River was best known as a popular white water rafting destination and its pristine water prized by residents in Colorado and New Mexico.

Today, it serves as a troubling reminder of the legacy left behind by the abandoned gold and silver mines that dot much of the West.

Last Wednesday, a crew working for the Environmental Protection Agency accidentally breached a dam holding back heavy metals used in the defunct Gold King Mine near Silverton, Colorado that sits at an elevation of about 11,000 feet.

As a result, 3 million gallons of toxic waste are now pushing down the Animas and San Juan rivers that cross Colorado, New Mexico and Utah, turning the waterways a sickly yellow-orange. Initially, the EPA estimated the plume carried at least 200 times more arsenic and 3,500 times more lead than is considered safe for drinking.

So far, there are few signs that wildlife has been harmed but residents living along the rivers are concerned the toxic brew could contaminate their drinking water, prompting the EPA to launch a series of tests along the rivers. EPA Administrator Gina McCarthy said Tuesday the agency "is taking responsibility to ensure that it is cleaned up."

Even when this abandoned Colorado gold mine is finally plugged and the water treated, the problem with abandoned mines is unlikely to go away.

"I think this was a disaster waiting to happen," Lauren Pagel, policy director for Earthworks, a nonprofit that works to highlight the adverse impacts of mining, told CBS News.

"There are similar mines across the West that are currently polluting our waterways at a slower rate than this unfortunate disaster," she said. "There are very few funds to clean them up and stop another disaster like this from happening."

There are hundreds of thousands of abandoned mines out West. Many hold tens of billions of tons of waste containing arsenic, asbestos, cadmium, cyanide and mercury.

For decades, the dangers of abandoned mines have been well understood, but a mix of political inertia and lack of funds has stymied efforts to clean up the problem.

"This is a problem everyone has known about and we all predicted there would be a catastrophic failure at some point," said Mark Williams, a fellow at the Institute of Arctic and Alpine Research at the University of Colorado Boulder.

A 1993 report from the Mineral Policy Center (now known as Earthworks) found that there were 557,650 abandoned mine sites in 32 states and that the cost then of cleaning them up was as much as $72 billion. The majority of these mines are located out West in Colorado, Utah, Arizona, New Mexico and California.

Known as hard rock mines, many date back to the height of the California Gold Rush in the 1800s. Miners swept across the Rocky Mountains in search of gold and silver in the 1870s and 1880s. The bulk of the mines were exhausted by World War I.

The mine owners left behind as much as 50 billion tons of untreated, unreclaimed mining waste. The Mineral Policy Center report found they have already polluted 12,000 miles of the nation's waterways and 180,000 acres of lakes and reservoirs and "are a growing threat to underground aquifers."

In California, the legacy of the gold rush still haunts the state. A report from the Sierra Fund found that "mercury, acid mine drainage, and other contaminated sediments left behind from mining threaten the water, plants, and people of the entire state."

The mine waste comes in two forms, either piles of waste rock often at valley bottoms near streams where the ore was once processed or at the mine site as happened with Gold King.

Williams, who works on targeted remediation for abandoned mines, said groundwater at these sites mixes with the heavy mineralized rock resulting in acid mine drainage, which then leaks from the mine into creeks and other waterways. Worse is a case like Gold King, where cave-ins result in lakes of mine waste forming at the site.

"This is really common in almost all the abandoned mines," Williams said. "A cave-in acts as a dam and a lake forms behind that cave-in and that is what happened in this case. Because of that, instead of having about 250 gallons per minute coming out, you have 3 million gallons."

While the scope of the Gold King case has generated national headlines, Williams said there have been several high profile spills in the past including a breach in the 1980s at the Leadville Tunnel in Colorado that killed off the aquatic life on a headwaters of the Arkansas River. Another case involved a cyanide spill in 1992 at an operational gold mine in southern Colorado, wiping out life on a 17-mile stretch of the Alamosa River, he said.

"This is not rare at all. We have had numerous other examples like this," Williams said, noting a similar case involves the Nelson Tunnel/Commodore Waste Rock Pile Superfund Site outside Creede, Colorado, where several cave-ins have resulted in a waste pool forming that is almost a mile in length.

"Water is leaking out of the Nelson Tunnel. I'm just saying it's a situation that is analogous to this mine but an even worse situation if there was a failure of these pools," he said. "The potential for additional spills with cave-ins and then lakes behind that cave-in, the potential for this type of activity to happen is pretty high. This will happen in the future."

A myriad of government agencies including the EPA and the U.S. Forest Service, together with the state agencies, have led the way in treating the water from these mines and plugging up others. But the task has long been complicated by the costly nature of any remediation, the complicated process for declaring Superfund sites and the fact that many are located at higher elevations where 30 feet of snow covers the sites for parts of the year.

Another hurdle has been a lack of dedicated funds for any cleanups. Unlike the coal industry which is required to set aside money for reclamation, Pagel said the hard rock industry has no such requirement and efforts to amend the General Mining Law of 1872 to include cleanup fees has repeatedly failed in Congress, including a push for reforms in 2007.

"We have been left very little resources to clean up these sites," Pagel said. "Occasionally, the EPA may help clean up sites or the state may have some funding. But it's really a patchwork of funds. In terms of the hundreds of thousand of mines, that will require a larger sum of money."

It also can be difficult to find the owners. And with sites like Gold King, not everyone wants a Superfund site in their neighborhood.

"The EPA for almost 20 years has been trying to get the citizens of Silverton to agree to that area's being called a Superfund site," Williams said. "They have decided not to do that because they are afraid it would reduce tourism, which is their economic engine."

However, Williams and others said they are hopeful attitudes in communities and among politicians will change as a result of the latest mine spill.

The disaster, they said, could serve as a "catalysts" that prompts government agencies to prioritize sites most at risk and Congress to dedicate the money necessary to clean up the network of mines that includes Gold King and many others.