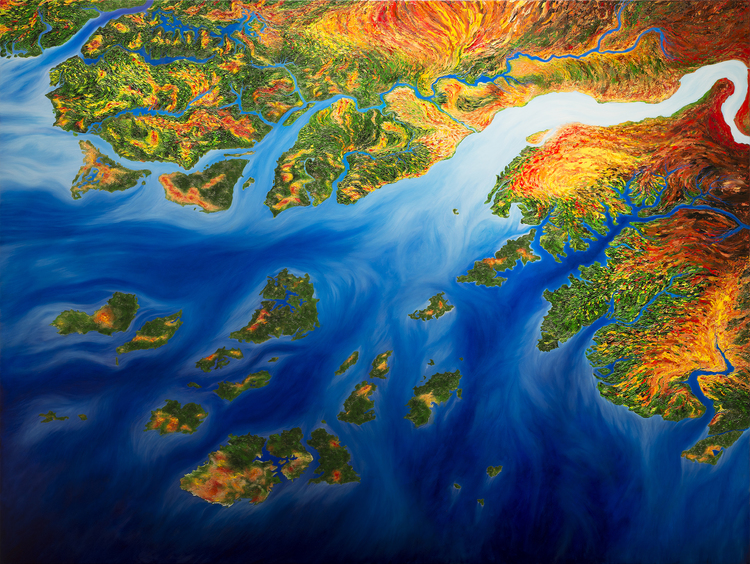 When John Sabraw, an art professor at Ohio University, visited the southeastern part of the state, something looked wrong.

"When I toured this area, I was struck by the local streams that are largely orange, red and brown as if a mud slide was happening further upstream," Sabraw said.

It wasn't mud, but acid runoff from the region's many coal mines.

Over the last century, Ohio has been one of the states extensively mined for coal. In the annual coal report by the Energy Information Administration, Ohio is ranked tenth in the nation in coal production. The part of the state Sabraw saw has the largest concentration of coal-burning power plants in the world.

Countless abandoned or disused underground coal mines are scattered over thousands of square miles there. Many are not sealed properly and consequently they fill with water that reacts with the exposed minerals, forming sulfuric acid and high levels of iron, said Guy Riefler, associate professor of civil engineering at Ohio University.

Millions of gallons of water drain out of the mines daily, entering streams, turning them yellow, orange and red as the metals mix with water and oxidize.

"The streams ... connect to other streams and rivers and eventually the ocean. It's all intertwined," Sabraw said. "This might seem a local issue but it's not -- it's a global issue and it affects everything on this planet."

An environmentalist as well as an artist, Sabraw was fascinated by the streams' colors and wanted to figure out a way to remediate (clean) the streams and do something with the leftover toxic sludge.

Knowing that the toxic waste was made out of iron oxide, which imbues paints with vibrant colors, he decided use it to make his own paint, which he could then use to create his paintings.

Sabraw said making his own pigments directly from waste has multiple benefits. Beyond a way to reduce pollution, it would also take shipping of commercial paints out of the equation, cutting down on greenhouse gas emissions associated with his art. Moreover, he wanted to let others know that producing sustainable art was possible.

"Most of the conflict, injustice, and devastation in the world today can be traced back to supply and demand related to abuse of natural resources," Sabraw said. "I think the artist lucky enough to be in a country with the wealth and access that we have owes a debt to use this support to push for greater responsibility, positive change, and sustainability."

Meanwhile, Riefler had been doing research on acid mine drainage for several years, and wanted to come up with a cheap or free water treatment process.

"Ohio does not have many water treatments to help clean polluted water from acid mine drainage and it's very expensive to clear it up," he said.

The two began collaborating on a project to create works of art from pigments derived from the polluted streams. Their ultimate goal? To take pollution -- something that is undesirable -- and commercialize it. The revenue from the sale of the pigment would directly fund the continued remediation of the streams, Sabraw said.

With the help of undergraduate researchers and graduate students at the university, Sabraw and Riefler took several trips to the polluted areas and pumped the toxic, acidic water coming from the mines into a large, portable containers. After bringing the batches back to the lab, they then poured it into a reactor and bubbled air through it, oxidizing the iron contained within.

Clean water was left on the top and concentrated iron waste fell to the bottom. They then brought the clean water back to the streams and converted the leftover pollution into valuable pigments for the paint that Sabraw used to create his artworks.

Sabraw's works are currently on display at the Thomas McCormick Gallery in Chicago.

For Sabraw and Riefler, the next step is to build a pilot program at a site that treats millions of gallons toxic water, and to try to create their pollution-based pigment on a commercial scale.

Correction: A previous version of this story misidentified the university where Sabraw and Riefler teach. It is Ohio University in Athens (www.ohio.edu), not the Ohio State University in Columbus.