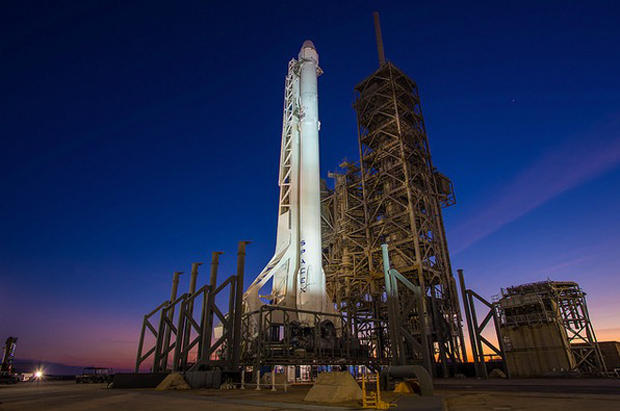 SpaceX is readying a Falcon 9 rocket for launch Saturday from historic complex 39A at the Kennedy Space Center to boost a space station-bound cargo ship into orbit, the company’s first Florida flight since a spectacular explosion Sept. 1 at the nearby Cape Canaveral Air Force Station.

It’s also the first launch from pad 39A, which once sent Apollo moonships and space shuttles on their way, since Atlantis took off on the program’s final flight in July 2011, a major milestone for SpaceX as the California rocket builder continues its recovery and begins working off a backlog of delayed payloads.

Supported by a massive transporter-erector at the top of the heavily modified launch pad, the Falcon 9 and its Dragon cargo ship are scheduled for takeoff at 10:01:32 a.m. EST (GMT-5) Saturday, roughly the moment Earth’s rotation carries the pad into the plane of the space station’s orbit.

Forecasters predicted a 70 percent chance of acceptable weather and the Federal Aviation Administration issued a launch license Friday clearing the way for flight. The only known technical issue was a “very small” leak of some sort in the rocket’s second stage, according to SpaceX founder Elon Musk. No other details were immediately available.

Assuming the Falcon 9 takes off as planned, the first stage will fly itself back to a landing at the Air Force station while the second stage puts the Dragon in the proper orbit to catch up with the space station early Monday. A successful first stage landing would be the company’s eighth in 13 attempts and its third return to Cape Canaveral.

Recovering, refurbishing and re-launching Falcon 9 components is a major goal for Musk and his drive to dramatically lower launch costs. The company plans to re-launch its first recovered stage next month to help boost an SES communications satellite into orbit.

But the primary goal of Saturday’s launching is to safely deliver more than 5,200 pounds of equipment and supplies to orbit, including a $92 million instrument to monitor Earth’s ozone layer and a $7 million sensor to study lightning.

“Lightning actually occurs somewhere on Earth some 45 times every single second,” said Michael Freilich, director of NASA’s Earth Science Division. “Understanding the processes that cause lightning and the connections between lightning and subsequent severe weather events, like convective storms and tornados, are keys to improving weather predictions and saving life and property in this country and (around) the globe.”

The Stratospheric Aerosol and Gas Experiment, or SAGE III, will “monitor the recovery of stratospheric ozone, the so-called ozone layer, as a result of the Montreal protocol,” Freilich said. “SAGE III will also measure other important stratospheric gases and atmospheric aerosols, which are components of pollution that also impact the radiation balance of our planet.”

The Lightning Imaging Sensor, SAGE III and another instrument to learn more about autonomous rendezvous technology will be removed from the Dragon’s unpressurized “trunk” section with the station’s robot arm and mounted at different points on the lab’s power truss.

The Dragon’s pressurized compartment, which is accessible to the station astronauts from inside the complex, includes crew food and clothing, spare parts and a variety of research materials, including antibiotic-resistant “superbugs” known as MRSA and 20 mice that will be euthanized in orbit as part of an experiment to learn more about processes that govern tissue regeneration.

“Up in space, you lose bone,” said Melissa Kacena, an associate professor of
orthopedic surgery and biomedical engineering. “In fact, astronauts lose about 1 to 3 percent of their bone density in a month. Someone with advanced osteoporosis loses closer to 1 percent per year.”

The rodent experiment will test different drugs to determine if microgravity improves their ability to “rebuild your bone systematically, so it could have applications not only for bone healing, but also for osteoporosis.”

As for launching MRSA, or methicillin-resistant Staphylococcus aureus, the goal is to learn more about how the bacteria mutate to design more effective drugs.

“We are excited to put MRSA, which is a superbug, on the International Space Station and investigate the effects of microgravity on the growth and mutation patterns of these bugs,” said Anita Goel, chairman and science director of Nanobiosym, which developed the experiment with the Center for the Advancement of Science in Space.

“I have this hypothesis that microgravity will accelerate the mutation patterns. If we can use microgravity as an accelerator to fast forward and get a sneak preview of what these mutations will look like, then we can essentially build smarter drugs back on Earth.”

This is the 10th of at least 20 space station resupply missions planned through 2024 that will be carried out by SpaceX under contracts with NASA. Orbital ATK also launches supplies to the lab complex using its Cygnus cargo ships. Three more SpaceX resupply flights are planned this year with two by Orbital ATK.

Getting pad 39A into operation is a critical milestone for SpaceX in the wake of the Sept. 1 explosion of a Falcon 9 during a pre-flight test on pad 40 at the Cape Canaveral Air Force Station. The explosion destroyed the booster, its $200 million satellite payload and heavily damaged launch complex 40.

An exhaustive investigation concluded the most likely cause of the mishap was the rupture of a high-pressure helium tank inside the rocket’s second stage liquid oxygen tank. An unrelated problem with the second stage helium pressurization system triggered the destruction of another Falcon 9 during a space station resupply launch in June 2015.

In the wake of that failure, SpaceX upgraded the Falcon 9 to improve its performance and one of the changes was the use of much colder propellants. In the September accident, ultra-low-temperature oxygen apparently worked its way into or under a helium bottle’s carbon composite overwrap, possibly freezing solid.

During the helium tank’s rapid pressurization during the propellant loading process, enough heat may have been generated to trigger a catastrophic rupture.

SpaceX has modified its fueling and pressurization procedures to prevent any repeat of that scenario and the company successfully returned to flight Jan. 14 with a launch from Vandenberg Air Force Base, Calif.

Pad 40 at the Cape Canaveral Air Force Station is expected to be repaired and ready for launchings this May. But in the meantime, SpaceX will be relying on pad 39A, which it took over from NASA in 2014.

The pad was used to launch Saturn 5 moon rockets during the Apollo program before undergoing extensive modifications to support the space shuttle. Columbia blasted off from pad 39A in 1981 to kick off the program and Atlantis used it for the last time in 2011.

SpaceX carried out major modifications to convert 39A for use by the Falcon 9, building a large rocket processing hangar at the base of the elevated pad, a transporter-erector to carry the rockets from the hangar to the top of the complex and powerful hydraulic systems to rotate the boosters vertical.

The existing water deluge system was modified help cool pad systems and deaden the acoustic shock of engine ignition and updated telemetry, command and control systems were installed along with new propellant lines and other components.

The rotating service structure that once swung around space shuttles to install payloads is being dismantled, but SpaceX will keep the central fixed service structure, installing a crew access arm that will swing into place so astronauts can board a piloted version of the Dragon for trips to the International Space Station.