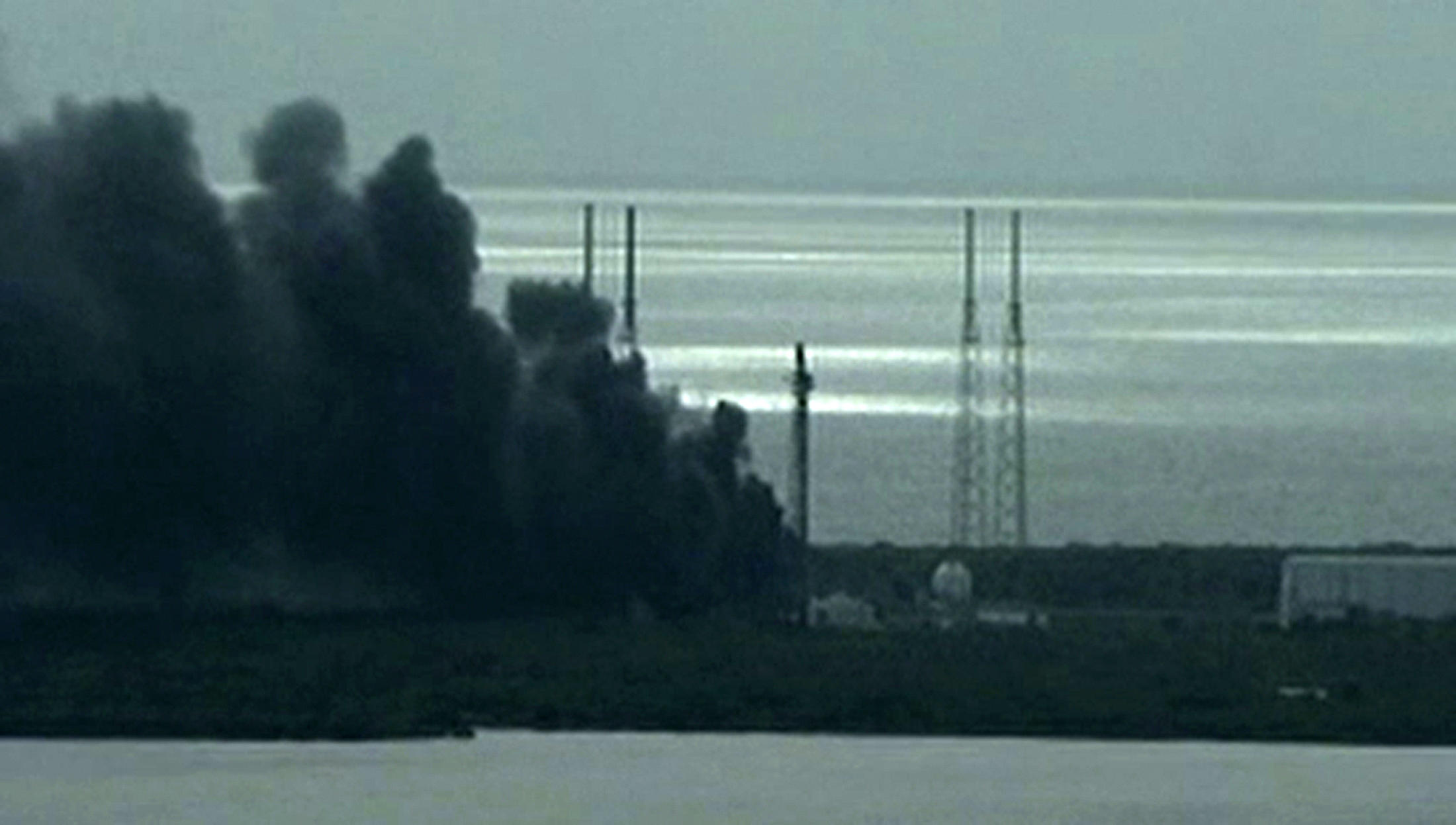 CAPE CANAVERAL, Fla. -- A fully-fueled SpaceX Falcon 9 rocket scheduled for launch Saturday exploded in a spectacular conflagration on the launch pad Thursday a few minutes before a planned main engine test firing. The booster was destroyed, along with its payload – a $195 million satellite that would have been used by Facebook – in a major setback for the California rocket builder.

Dramatic video posted by USLaunchReport.com showed the explosion starting toward the top of the rocket where the second stage is connected by umbilicals to a support gantry.

SpaceX had hoped to launch the rocket early Saturday to boost Spacecom’s AMOS-6 relay station into orbit. The company erected the rocket on the pad for a short main engine test firing Thursday to make sure all systems were ‘go’ for flight.

Ignition of the booster’s nine Merlin 1D first-stage engines was planned for around 9:15 a.m. EDT (GMT-4), sources said. But as the countdown ticked through the T-minus eight-minute mark, the rocket was engulfed in a conflagration that sent a towering plume of thick black smoke into the air above launch complex 40 at the Cape Canaveral Air Force Station.

“It appears ... the entire rocket exploded,” a NASA source at the nearby Kennedy Space Center said after his building was rocked by the concussion. “We heard a very large explosion and a number of secondary explosions. There’s a big fire and a lot of black smoke in the air.”

At that point, it was not clear what might have happened, but SpaceX later posted a short statement confirming the loss of the rocket and its satellite payload.

“SpaceX can confirm that in preparation for today’s static fire, there was an anomaly on the pad resulting in the loss of the vehicle and its payload,” the company said. “Per standard procedure, the pad was clear and there were no injuries.”

The Brevard County Emergency Management Office described the incident on Twitter as a “catastrophic abort” but said there was no threat to the general public.

The rocket’s payload, an Israeli communications satellite, was to be used by Facebook as part of its effort to expand internet connectivity in Africa.

In a statement posted on Facebook, CEO Mark Zuckerberg wrote, “As I’m here in Africa, I’m deeply disappointed to hear that SpaceX’s launch failure destroyed our satellite that would have provided connectivity to so many entrepreneurs and everyone else across the continent.”

It was the second loss of a Falcon 9 rocket​ since the booster’s debut in 2010 and, based on Musk’s tweet, possibly the second caused by a problem in or near the second stage liquid oxygen tank.

The company’s only in-flight failure, in June 2015​, was triggered by a helium pressurization tank inside the upper stage liquid oxygen tank that broke away when a strut failed, triggering the rocket’s destruction.

The company’s flight record stands at 27 successful missions in 28 launchings.

But the loss of AMOS-6 satellite was a major setback for SpaceX and its customer, Spacecom. Space News reported Aug. 24 that Spacecom had arranged to sell the company to a Chinese conglomerate pending the successful launch and activation of AMOS-6. Spacecom’s stock closed down nearly 9 percent Thursday.

The mishap occurred in the midst of an extremely busy fall launch schedule by SpaceX.

Along with the AMOS-6 launch planned for Saturday, SpaceX was scheduled to launch 10 Iridium satellite telephone spacecraft from Vandenberg Air Force Base, Calif., on Sept. 20 followed by launch of the SES-10 communications satellite atop the first recycled, or “used,” Falcon 9 rocket​, a flight believed to be targeted for mid October.

NASA was standing by for launch of a SpaceX Dragon spacecraft Nov. 11 to deliver needed supplies and equipment to the International Space Station.

“We remain confident in our commercial partners and firmly stand behind the successful 21st century launch complex that NASA, other federal agencies, and U.S. commercial companies are building on Florida’s Space Coast. Today’s incident -- while it was not a NASA launch -- is a reminder that spaceflight is an incredible challenge, but our partners learn from each success and setback.

“The situation at the Cape is being evaluated, and it’s too early to know whether the incident will affect the schedule for upcoming NASA-related SpaceX launches to the International Space Station. If there are SpaceX mission delays, other cargo spacecraft will be able to meet the station’s cargo needs, and supplies and research investigations are at good levels.

“The launch for NASA’s OSIRIS-REx mission remains on track for Sept. 8. Initial assessments indicate the United Launch Alliance Atlas V rocket and OSIRIS-REx spacecraft are healthy and secure in the Vertical Integration Facility at Space Launch Complex-41, which is 1.1 miles from SpaceX’s launch pad where the incident occurred.”

Another half-dozen payloads were believed to be on the SpaceX manifest before the end of the year.

But before any of those downstream missions can fly, SpaceX will need to repair or rebuild launch pad systems at complex 40 and identify and fix whatever problem triggered the explosion. The pad apparently suffered extensive damage, although no details were immediately available.

SpaceX is in the process of modifying one of NASA’s retired shuttle pads, launch complex 39A, for use by Falcon 9 rockets. Whether SpaceX might be able to accelerate modifications at pad 39A or whether the company will be forced to fix pad 40 before resuming flights is not yet known.

For NASA, the mishap also could cause problems depending on how long the Falcon 9 program is grounded. The space agency uses SpaceX and Orbital ATK to deliver supplies to the station, along with Russian Progress freighters and Japanese HTV supply ships.

“When you lose one of those capabilities, even temporarily, yes, it’s an impact,” space station Program Manager Kirk Shireman told Spaceflight Now in an interview Thursday. “What specific impacts there will be is hard to say. It’s a disruption, and we’ll manage it. We’re very good at anticipating what things could happen and positioning ourselves to be tolerant to those things, and then recovering from them.”

But NASA already was wrestling with other resupply issues.

An HTV scheduled for launch at the end of October was grounded after engineers in Japan discovered leaks in its propellant system. That fight is on hold until December at the earliest.

Orbital ATK suffered a catastrophic launch failure in 2014 and was forced to buy two Atlas 5 rockets from United Launch Alliance to deliver station supplies while the company worked to incorporate different Russian-built engines in its Antares booster.

The Atlas flights went smoothly, but Orbital has had problems verifying the performance of the new RD-181 engines in the Antares first stage and first flight of a re-engined Antares is now down several weeks over the original summer target

NASA’s latest internal launch schedule shows launch of the re-engined Antares “no earlier than Sept. 26,” but sources say the flight could be delayed well past that target date depending on how on-going engine analysis proceeds.

SpaceX, in contrast, had been firing on all cylinders, launching nine successful Falcon 9 flights in a row -- and six successful first stage landings -- following a June 2015 in-flight failure that destroyed a station-bound Dragon cargo ship.

SpaceX’s next station resupply run in November almost certainly will be delayed in the wake of Thursday’s mishap. But Shireman downplayed any immediate concern.

“We actively track and plan for logistics on-board ISS, and by logistics I mean not only food and water for the crew, but we’re also talking critical spares for equipment that has to work, like oxygen generation, carbon dioxide removal, the toilet, all those things that really have to work,” he told Spaceflight Now.

“We also track logistics for science. We track what our science program is and we carry reserve science as well. All those things we manage, and we track at every one of our program reviews.”

Shireman said NASA had not yet fully recovered from the earlier Orbital ATK and SpaceX launch failures, along with the loss of a Russian Progress in April 2014, but overall “we’re doing very well.”

“In terms of spares on orbit, critical spares for hardware, I would say we’re close,” Shireman said. “We’re not quite recovered. In terms of food, water and science, yes. Our No. 1 priority was, of course, we want to keep the crew healthy, but it was really also science. And then it was building back up the spare posture we’d like to have on orbit, and we’re close to that.”