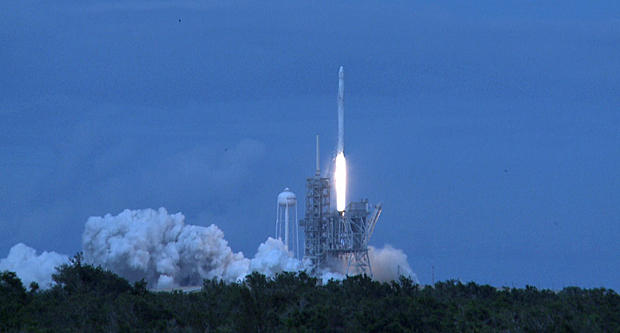 Running two days late because of stormy weather, a SpaceX Falcon 9 rocket shot away from the Kennedy Space Center Saturday, boosting a previously flown Dragon cargo ship into orbit for its second fight -- a first for the California rocket builder -- to deliver supplies and equipment to the International Space Station.

Despite initial concern about afternoon clouds, conditions were within limits as Earth's rotation carried pad 39A into the plane of the space station's orbit and the Falcon 9's first-stage engines roared to life on time at 5:07 p.m. ET.

Climbing away to the northeast, directly into the station's orbital plane, the Falcon 9 quickly accelerated as it consumed its load of first-stage propellants and lost weight, putting on a dramatic weekend show for area residents and tourists.

Two minutes and 25 seconds after liftoff, after boosting the rocket out of the thick lower atmosphere, the first stage engine shut down. Seconds later, the stage fell away and the single engine powering the Falcon 9's upper stage ignited for a six-minute-48-second burn to orbit.

Because the payload was bound for a relatively low altitude, the first stage had enough oxygen and kerosene propellant left over to fly back to a landing pad at the Cape Canaveral Air Force Station. After flipping around, the stage fired three of its nine engines to reverse course, then again to slow down for atmospheric entry.

Spectacular video from an on-board camera showed the rocket's dramatic descent, four "grid fins" at the upper end of the rocket maintaining the proper trajectory and tail-first orientation.

Finally, a single engine reignited, four landing legs deployed and the stage settled to a pinpoint touchdown on the circular Landing Zone 1 pad at the Air Force station.

In keeping with that theme, the pressurized capsule section of the Dragon cargo ship is making its second flight to the station, the first time an orbital spacecraft has returned to space since the shuttle program ended in 2011. The cargo ship previously flew to the station in September 2014 in SpaceX's fourth resupply mission.

Of all the spacecraft that deliver cargo to the station -- the Russian Progress, Orbital ATK's Cygnus, Japan's HTV and SpaceX's Dragon -- only the Dragon is designed to return to Earth, bringing cargo and science samples back to engineers and researchers and preserving flight hardware for reuse as needed.

"Supporting the Dragon reflight is a really, really important step," said Kirk Shireman, space station program manager at the Johnson Space Center in Houston. "SpaceX did a very thorough job in terms of certification of the Dragon and refurbing it and NASA did a very thorough job of understanding that certification and making sure it was safe to fly.

"The risk was not substantially more than a brand new Dragon capsule," he added. "So we're very happy with this capsule flying again. ... We expect to increase the amount of reflight as (NASA's contracts with SpaceX) proceed."

The Falcon first stage landed about two minutes before the second stage completed the Dragon's boost to orbit. The cargo ship then was released to fly on its own and moments later, its two solar panels unfolded and locked into place.

If all goes well, the Dragon will catch up with the space station early Monday, pulling up to within about 30 feet of the lab complex around 10 a.m. and then standing by while astronaut Jack Fischer, operating the lab's robot arm, locks onto a grapple fixture.

From there, flight controllers at the Johnson Space Center in Houston will take over, operating the arm by remote control to pull the capsule in for berthing at the Earth-facing port of the station's forward Harmony module.

The Dragon's pressurized compartment, the section accessible to the station's crew, is packed with some 3,700 pounds of equipment and supplies, much of it devoted to medical and biological research.

Three payloads are mounted in the Dragon's unpressurized trunk section: an experimental roll-out solar array, a commercial platform that can support up to four Earth-observation instruments at a time and a suite of telescopes to study neutron stars. All three will be deployed by the station's robot arm.

Along with trying to learn more about the basic physics of neutron stars -- the collapsed city-size remnants of once-massive stars -- the Neutron star Interior Composition Explorer, or NICER, instrument will attempt to demonstrate how fast-spinning neutron stars, or pulsars, might be used as ultra-precise navigation beacons for future deep space missions.

"The fact that we have these pulsars apparently flashing away in the sky (hundreds of times per second) makes them interesting as tools," said Zaven Arzoumanian, lead researcher with the NICER project.

"You can imagine having a system of clocks, very accurate clocks, distributed all over the sky. ... So in the same way that we use atomic clocks on GPS satellites to navigate our cars on the surface of the Earth, we can use these clock signals from the sky, from pulsars, to navigate spacecraft anywhere in the solar system."

To make way for the Dragon's berthing Monday, flight controllers plan to use the station's robot arm Sunday to detach an Orbital ATK Cygnus cargo ship currently berthed at the Unity module's Earth-facing port. The Cygnus arrived at the station on April 22, bringing 7,600 pounds of supplies and equipment. The spacecraft is now loaded with trash and no-longer-needed material.

The station arm cannot reach the Cygnus after the Dragon is in place at Harmony's lower port so the Orbital ATK supply ship is being unberthed Sunday. Unlike the Dragon, the Cygnus is not designed to survive re-entry and it will burn up when it falls back into the atmosphere.

Saturday's launching was SpaceX's seventh Falcon 9 flight this year -- it's sixth in a row off pad 39A -- and its 35th since the rocket's debut in 2010. The company has suffered two failures to date, an in-flight breakup in June 2015 that destroyed an earlier Dragon cargo ship and an on-pad explosion last September that destroyed a communications satellite.

SpaceX plans two more space station resupply missions this year, the 12th and 13th under contract to NASA. In the near term, the company plans to launch a pair of communications satellites later this month from Kennedy and a set of Iridium telephone satellites from California.