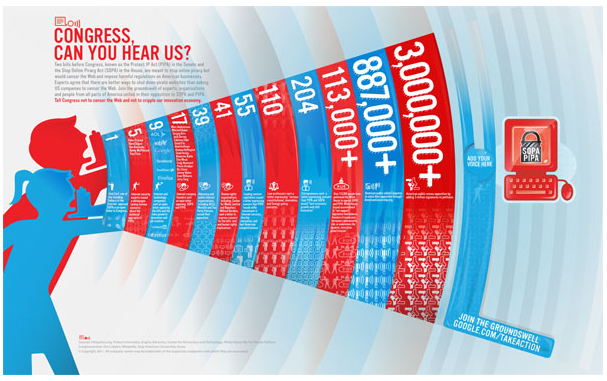 (CBS) - The Internet sent a loud message to Congress in a coordinated blackout of websites on Jan. 18. to protest the anti-piracy bills, Stop Online Piracy Act (SOPA) and Protect IP Act (PIPA).

The Los Angeles Times says Google confirmed that 4.5 million people signed the company's petition to protest SOPA and PIPA, while 350,000 emails were sent to representatives via SopaStrike.com and AmericanCensorship.org.

According to the White House, a combined 103,785 signed a petition to kill the bill. About 24 U.S. Senators have now come out against the bills, including former co-sponsors Ben Cardin, Marco Rubio and Roy Blunt.

SOPA and PIPA have faced a rocky battle since inception, building up to the Internet blackout on Wed.

SOPA is the House version of the bill and caught the attention of tech companies since it was introduced by Rep. Lamar Smith in Oct. 2011. In Nov., Google, Facebook, eBay and other major tech players took out a full page add in the New York Timesto state their opposition.

SOPA and PIPA bills continue to lose supporters
SOPA opera: the Internet dukes it out with Congress

In Dec., members of the link-sharing community Reddit organized a boycottagainst domain registrar GoDaddy after it was discovered that the company supported SOPA. It was later discovered that GoDaddy was also exempt from the bill.

Earlier this month, Reddit announced that it would black out the site to protest the bills. Although, Wikipedia's co-founder Jimmy Wales had pondered the idea earlier, the site sought a community consensus before deciding to join Reddit. Just days before the protest was to take place, Google announced that it would use its homepage to inform the public about SOPA and PIPA.