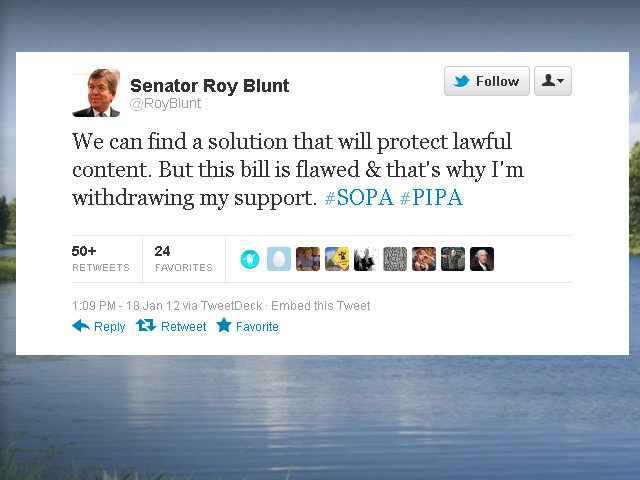 (CBS) - A coordinated effort by over 7,000 websites to blackout their pages for a day on Jan. 18 has given lawmakers plenty of food for thought. The Internet blackout is to protest the anti-piracy bills, Stop Online Piracy Act (SOPA) and Protect IP Act (PIPA).

Wednesday's blackout even rallied some quiet protestors to speak out. Facebook co-founder and chief executive officer Mark Zuckerberg turned to Facebook and made a rare appearance on Twitter to give this statement:

"The internet is the most powerful tool we have for creating a more open and connected world. We can't let poorly thought out laws get in the way of the internet's development. Facebook opposes SOPA and PIPA, and we will continue to oppose any laws that will hurt the internet.

The world today needs political leaders who are pro-internet. We have been working with many of these folks for months on better alternatives to these current proposals. I encourage you to learn more about these issues and tell your congressmen that you want them to be pro-internet."

Lawmakers are feeling the pressure from constituents reaching out. The Verge reported visitors had trouble accessing the U.S. Senate website, due to "technical difficulties." People were encouraged to call, email and tweet their representatives.

SOPA opera: the Internet dukes it out with Congress
SOPA supporters facing boycotts, thanks to Reddit
SOPA opposition from tech heavyweights Google, Facebook

Former supporters of SOPA and PIPA took to social networks today to announce their change of heart.

"I have decided to withdraw my support for the Protect IP Act. Furthermore, I encourage Senator Reid to abandon his plan to rush the bill to the floor. Instead, we should take more time to address the concerns raised by all sides, and come up with new legislation that addresses Internet piracy while protecting free and open access to the Internet," Sen. Marco Rubio (R., Fla.) posted on Facebook this afternoon.

"SOPA: better to get this done right rather than fast and wrong. Stealing content is theft, plain and simple, but concerns about unintended damage to the internet and innovation in the tech sector require a more thoughtful balance, which will take more time," Sen. John Cornyn (R., Texas) posted on Facebook this morning.

"Thank you for your concern about #SOPA. I have asked to have my name removed from the bill. However, the economic impact of IP theft is real and a solution is needed," Rep. Lee Terry (R., Neb.) posted on Facebook this morning.

"Have you seen my stance on SOPA and PIPA? I'm going to vote no, the Internet is too important to our economy, and the legislation as it stands provides too much room for misinterpretation," Sen. Scott Brown (R., Mass.) posted on Facebook yesterday.

"I strongly oppose sanctioning Americans' right to free speech in any medium, including over the internet," Sen. Roy Blunt (R., Mo.) tweeted on Twitter this afternoon. "We can find a solution that will protect lawful content. But this bill is flawed & that's why I'm withdrawing my support."

It's a small victory for protesters, but the bills are still in play. PIPA heads to the senate for a vote on Jan. 24. According to a statement released by Rep. Lamar Smith, SOPA will continue markup in Feb.

Gmail gets a new look, similar to Google+