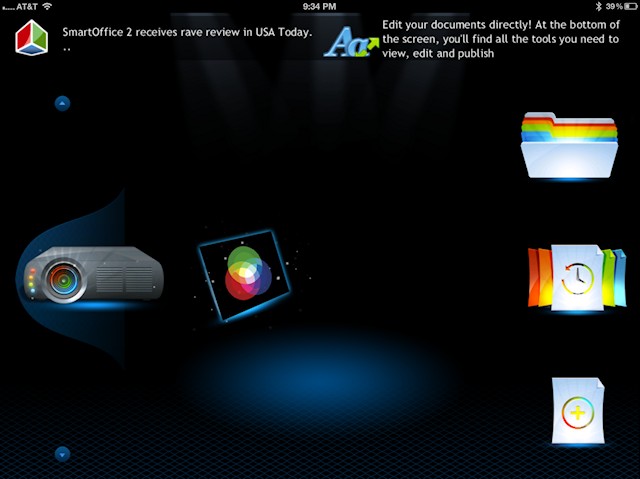 (MoneyWatch) For a device that's generally considered a "consumption" gadget -- think reading, watching movies, playing games -- the iPad has a robust inventory of office and productivity apps to choose from. And there's a new entry that is unique enough to warrant a closer look.

Smart Office 2 is an iPad-compatible productivity app that is both a document viewer and editor. The app didn't just pop into existence recently, though -- it has a long legacy as a high-quality productivity app, known as Picsel for the Palm OS, from back in the dinosaur days before smartphones ruled the world.

First, the good news. You can use Smart Office 2 to view and edit Word, Excel and PowerPoint documents, as well as view a variety of image formats like PDF, JPG and some others that stopped being relevant around the time that the Palm OS became obsolete. The app can access files stored internally as well as in Google Drive and Dropbox.

That said, the app's user interface is somewhat nonstandard, to say the least. It flouts ordinary iOS conventions and uses an attractive interface that eschews the clarity of text in favor of sexy colorful icons that could mean, well, anything. It'll take you a lot of random tapping and dragging before you figure out that the left side of the screen lets you open files from the cloud, access a user guide, project and print, while the right side of the screen lets you get to locally stored files or create new documents.

You'll appreciate the fact that Smart Office 2 comes with a small assortment of handy templates for creating documents from scratch, such as a resume, invoice, document and presentation. When editing, a double tap invokes a cool editing bar with all the commands you need to produce attractive but modest documents.

That's cool, but Smart Office still has a ways to go. While you can open Google Drive documents, you can't save your completed stuff there, and in fact there's no autosaving at all -- if you forget to save your work, your document is just lost to the ether, sort of like the way cavemen used to word process. And some files that should have been editable weren't -- likely a bug in the app's integration with the cloud.

Smart Office 2 is a work in progress, and I suspect it will get better with time. For now, it's not nearly worth the $10 price tag it has in the app store. Instead, for $15 get the far superior Quickoffice Pro.