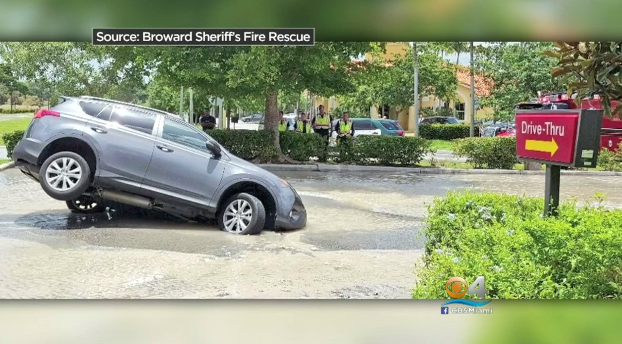 A 4-year-old is safe in his mother's arms after a frightening situation with his grandmother on Thursday.

Dolores Otero and her grandson Angel were driving through a McDonald's parking lot in South Florida when the ground gave way, sending them plunging into a 10-by-10-foot sinkhole with water rushing in, CBS Miami reports.

"Abuela [grandma] was scared and we were stuck," said Angel.

"I just thought it was water or puddle," Otero told the station. "All of a sudden my car starts going 'ehh, ehhh, ehh' and you saw what it looked like."

Otero said the front of the car started filling up with water.

"She said all her legs were completely wet," Angel's mother Michelle said. "She thought it was going to completely open up underneath her."

Otero feared the car might land on its side -- or worse. "I was afraid it was gonna open up more and I was gonna be in there underneath ground," Otero said.

Mike Jachles with Broward Sheriff's Fire Rescue explained, "She obviously saw the ground was compromised so she stopped as she was entering that parking lot. She stopped short of that but the water was too much apparently. That ground gave way and the next thing she knew the nose of her vehicle was nose down in the water."

Angel was in a booster seat and was scared about the water pouring in. "I'm thinking that something is very -- something is happening to me," said Angel. "But I was so worried about Abuela."

Otero said a pair of Good Samaritans pulled her and Angel to safety from the driver's side of the vehicle. She's grateful that no one was seriously hurt and is still trying to deal with fright she felt.

For her part, Michelle Otero is relieved her son and mother-in-law made it out, but she says the car may be a total loss.

"She's shooken up. I mean, even while making the insurance claim, I had to take the phone and take over because she was crying hysterically," she recalled.

The McDonald's location planned to reopen on Friday. Staff at that location will have to boil water until it's deemed safe.

Now, Otero wants answers about how this happened and why no one blocked off this area before she drove into the hole. She also wants some resolution about who's going to pay to fix or replace her car.