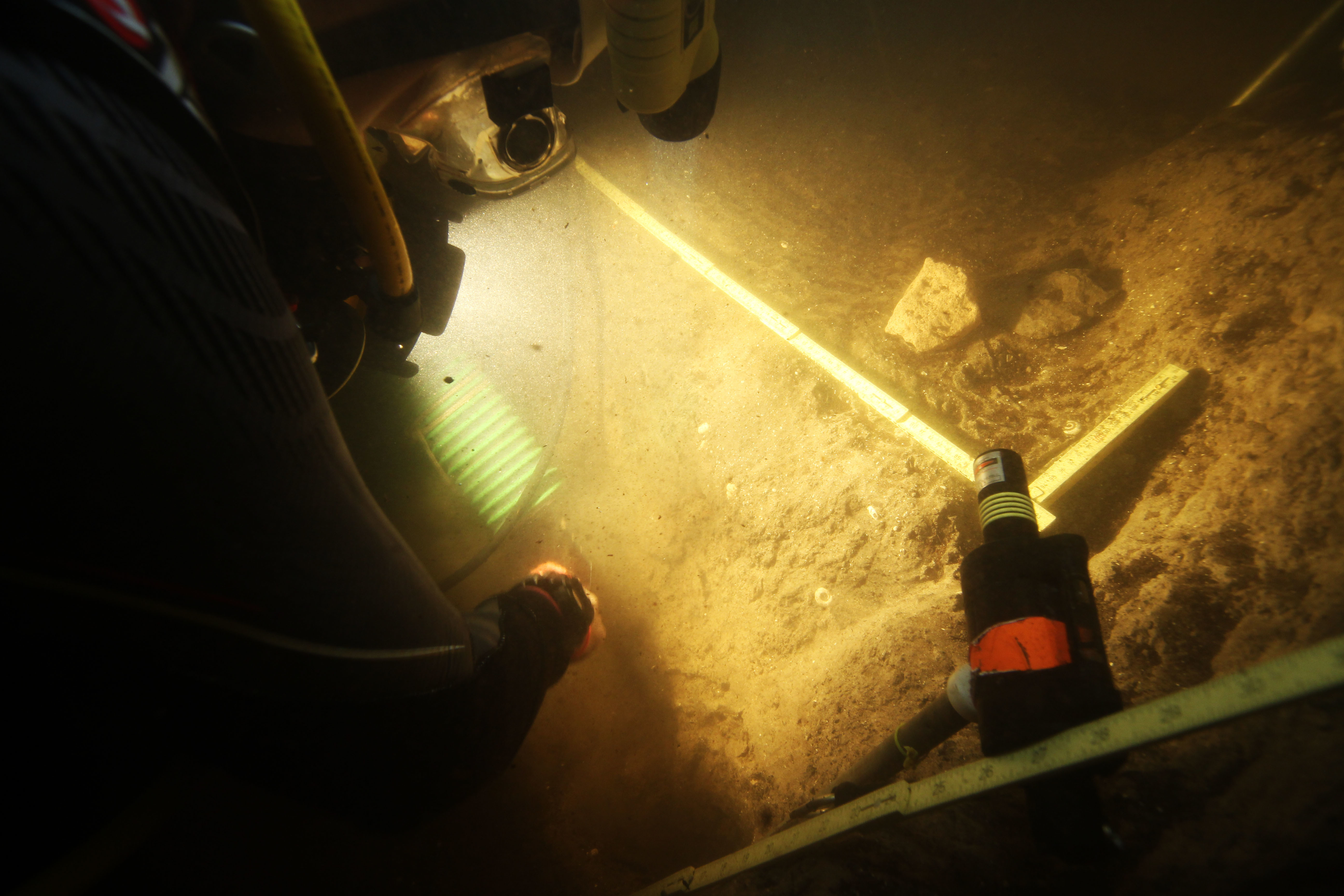 Scientists say a stone knife and other artifacts found deep underwater in a Florida sinkhole show people lived in that area some 14,500 years ago.

That makes the ancient sinkhole the earliest well-documented site for human presence in the southeastern U.S., and important for understanding the settling of the Americas, experts said.

The findings confirm claims made more than a decade ago about the site, some 30 miles southeast of Tallahassee. At that time, researchers reported evidence that humans were there some 14,400 years ago. But in an era when such an old date was widely considered impossible, other experts disputed the evidence, said Mike Waters of Texas A&M University in College Station.

The sinkhole was "just politely ignored," he said.

Waters was among a new team of scientists who excavated there from 2012 to 2014. They report finding the knife and stone flakes in a paper released Friday by the journal Science Advances. The new work offers "far better" evidence for early humans than the earlier research did, he said.

The sinkhole is nearly 200 feet wide. In ancient times, it had a shallow pond at the bottom. That offered fresh water and a gathering point for animals, which "probably would have been easy pickings" for hunters who saw them trapped in the deep depression, Waters said.

"Hiybbprqag?" How Google Tripped Up Microsoft

Today, the sinkhole is filled with about 30 feet of water, and it took divers equipped with head-mounted lights to look for artifacts. It was "as dark as the inside of a cow, literally no light at all," said Jessi Halligan, the lead diving scientist and an assistant professor of anthropology at Florida State University in Tallahassee.

They found the knife while digging with a trowel. It's a couple of inches long and about an inch wide, sharpened on both sides.

To determine its age, the researchers used nearby mastodon dung, which contained twigs that could be analyzed. The twigs, and therefore the knife, were found to be about 14,550 years old.

Man-made stone flakes were found to be about the same age. The scientists also examined a mastodon tusk recovered in 1993, and confirmed that its long, deep grooves were made by people, probably as they worked to remove the tusk from a skull.

The first people in North America are thought to have crossed a now-submerged land bridge from Siberia to Alaska. From there, people spread southward. Waters said the age of the sinkhole artifacts adds to evidence that people may have migrated south from Alaska as early as 16,000 years ago by boat along the coast, because inland Canada was blocked by ice sheets until 2,000 years later.

Halligan said the ancient visitors to the sinkhole could have been the Southeast's first snowbirds, moving south for the winter and north for the summer. They could have followed mastodons, whose remains have been found as far north as Kentucky, she said.

"They were very smart about local plants and local animals and migration patterns," she said.

In American archaeology, sites showing signs of human presence more than about 13,000 years are called "pre-Clovis," since they predate the Clovis era of widespread human occupation.

Dennis Stanford of the Smithsonian Institution's National Museum of Natural History said that he ranked the sinkhole with two locations in Pennsylvania and Virginia as "the best-dated and oldest pre-Clovis sites yet found in North America."

While the other two sites are older, "the Florida site has a major role to play in learning the story of the peopling of the Americas," said Stanford, who didn't participate in the research.

FSU Lead Diver Jessi Halligan told CBS affiliate WCTV in Tallahassee the items date back to 14,550 years ago, "The day we found that artifact we were really excited because there's absolutely no way that stone knife wasn't made by people."

WCTV talked with Morgan Smith by Skype, he's a doctoral student at Texas A&M who helped with the dive, "I started breathing really fast underwater, like sucking through my air and I just had to control myself."

He remembers the exact moment a team member showed him the ancient find during the dive.

"The moment he showed it to me I couldn't even believe it. So I just turned away like, yeah whatever. Then he was like no I really did find this! I was like are you serious? It was a really intense moment; it was really fun!"

Another expert, James Adovasio of Florida Atlantic University in Boca Raton agreed, saying it promises to shed light on "early Native American lifestyle in an environment where these lifestyles are very poorly defined."